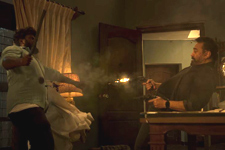 T J Reddy / fullhyd.com
EDITOR RATING
6.0
Performances
Script
Music/Soundtrack
Visuals
8.0
5.0
8.0
7.0
Suggestions
Can watch again
Yes
Good for kids
No
Good for dates
Yes
Wait for OTT
No
Once upon a time, Kamal Hassan said in an interview that his 1986 film wasn't up to scratch as the directors of the time had different sensibilities and weren't game for action films. Even though the movie was a box office success, Kamal spoke of how its shortcomings remained with him ever since.

36 years later, he gets a chance to right that wrong with director Lokesh Kanagaraj at the helm.

Kanagaraj is a fascinating specimen within himself. His films have a Sukumar trademarked flair to them. Immersive worlds, memorable characters, striking style, but something always feels amiss. There's an art to making a perfectly imperfect movie. He makes movies that gnaw on your mind with flourishing creativity. But tags on a host of missed opportunities. Vikram is one such film.

In Vikram, a secret operative codenamed Amar (Fahadh Faasil) investigates a band of serial killers who routinely murder high-ranking police officers. Amidst this pile of corpses is one of an everyday man named Karnan (Kamal Hassan). Amar diverts his attention to investigating this odd duck among the chicken, and soon finds himself wrapped up in a night of darkness and terrors.

Amar's journey from the initial stages of the story to the reveal of the perpetrators of the murders is a sublimely executed police procedural. As we follow Amar from clue to clue, the presence of Karnan, the character, and Kamal Hassan, the actor, looms large on-screen. The film lights the wick of its cannon, looks at its audience, and waits.

There is an inherent tension in lighting the wick and waiting for its length to burn. The filmmakers marinate in this tension. Unlike most movies that choose to blow their load after a few huffs and puffs, Vikram waits, and its deliberate storytelling isn't without reason. It has a world to introduce to its audience. A world populated with copious numbers of eccentric gangsters, drugs, cops, vigilantes, and a metric ton of guns and ammo. Through Amar's expressive eyes, this world becomes a living organism morphing from location to location.

As this proverbial caterpillar of a script weaves a cocoon around itself with a lot of intricate plotting and character development through the first half, the tension breaks, and the cannon fires into the second half of gunshots, explosions and blood spills. While the blood spills are righteous, the film itself chooses not to take sides with its characters. Every character seems to have their goals, hurdles and journeys they need to traverse. The film merely asks you to walk in each of their shoes. It is a remarkable mode with which to operate a genre film.

But why does it find itself stuck in my brain instead of sliding into my heart?

For the answers, you need only look at the flaws of Lokesh Kanagaraj's previous work, Master. As in that movie, there is too much and too little in all the wrong places. There is an immense amount of time dedicated to characters and their quirks. However, the time needed to fit them into the narrative is lacking. There are clever ideas delivered in quick-line readings, yes. But the time required to convert those ideas into sub-plots is a hard no. The film has three top-tier leads, but only two of them get fleshed-out characters. The film is chock full of character motivations, songs, arcs, callbacks, references, set pieces, shades, guns, biriyani, more guns, explosions, cocaine, and so much that it refuses to let you take a second to absorb anything that it presents. The film is high on its own supply and makes you watch while its zany antics unfold at a breathless pace.

I couldn't help but feel a sense of admiration for a movie that tries so hard. It compelled me to stare at the screen as every frame brimmed with an endless amount of life. The madman behind the camera wanted to pay tribute to his idol while making a film befitting the latter's stature in the former's eyes. It is a view into a creator's psyche like no other.

Vikram is not a perfect film. It is an interesting film. I caught myself reminiscing about my time watching and rewatching Pushpa: The Rise, putting pieces of the puzzle back together to my liking. I have a suspicion that I will be doing the same with Vikram for months to come.

Speaking of Pushpa, Fahadh Faasil almost steals the film from right under Kamal Haasan's overpowering gaze. The subtlety he infuses into a stereotypical character is crucial to holding the movie to its initial gallop. Once the audience tunes themselves to the gallop, the man takes over. Kamal Haasan has not looked this energized on screen for a long time. There is an ease to his performance that has been sorely lacking from many of his previous projects. The pressure of not having to write, direct and be the creative force behind his projects seems to have taken a weight off his shoulders. He is Kamal Haasan, the actor, here, and is all the better for it.

Our special mention goes to Vijay Sethupathi for building a fully formed person out of a few lines of character development. The man's mind for physically performing a role knows no bounds.

Another boundless pool of seemingly never-ending talent is the film's composer extraordinaire, Anirudh. The man's golden stretch continues with another banger of a score for a movie that differentiates itself with its soundscape alone. The rhythmic nature of the gunshots coalesces with the score to form a symphony of violence. It is a symphony that creates a hypnotic attraction.

The visual grammar of the movie matches the beat of the music. Framing every shot with care and adding purpose to every cut is a rare feat in a "commercial entertainer". While the film splices a few random frames a couple of times, it is a reminder that this is a movie hampered by doing too much and too little.

I would love to see Lokesh Kanagaraj create an Indian reimagining of The Wire. It is an environment that allows him to let his characters run loose and explore their psyches to his heart's content. He never has to take sides and can only explore his world. He can have Dilli, Vikram, JD, Rolex, Winnings, Bejoy, Amar, Bhavani etc. swoop in and out of each other's lives. An endless canvas can allow him to tell a story for the ages, but until then, our opinions of his work are as limited as his reach and runtime. 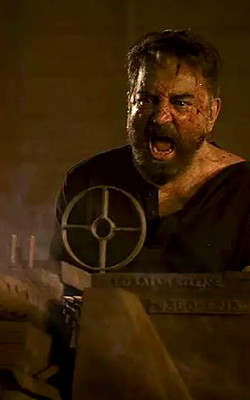 ADVERTISEMENT
This page was tagged for
Vikram telugu movie
Vikram reviews
release date
Kamal Haasan, Vijay Sethupathi
theatres list
Follow @fullhyderabad
Follow fullhyd.com on
About Hyderabad
The Hyderabad Community
Improve fullhyd.com
More
Our Other Local Guides
Our other sites
© Copyright 1999-2009 LRR Technologies (Hyderabad), Pvt Ltd. All rights reserved. fullhyd, fullhyderabad, Welcome To The Neighbourhood are trademarks of LRR Technologies (Hyderabad) Pvt Ltd. The textual, graphic, audio and audiovisual material in this site is protected by copyright law. You may not copy, distribute, or use this material except as necessary for your personal, non-commercial use. Any trademarks are the properties of their respective owners. More on Hyderabad, India. Jobs in Hyderabad.