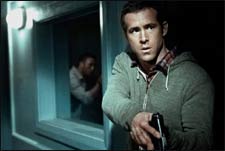 Nupur Barua / fullhyd.com
EDITOR RATING
5.0
Performances
Script
Music/Soundtrack
Visuals
7.0
4.0
6.0
6.0
Suggestions
Can watch again
No
Good for kids
No
Good for dates
No
Wait to rent it
No
Hollywood espionage movies are not as intellectually stimulating as the British ones, and the past few years have seen a decline in the genre. It is a rather safe space to play around in, just like the romantic comedies that we see now and then - the climax is predictable, the underdog always wins, and corruption is always the villain, or, if the movie has a Tom Cruise or a Matt Damon, it becomes a franchise.

David Guggenheim, who wrote Safe House, must have known who was going to play the characters he etched out in his screenplay. "Denzel, Ryan, Vera and Brendan, eh?" he thought, and concentrated hard on giving them intense dialogues and expressions, therefore missing out on the plot altogether.

To be fair, the story is not half bad. It is the lack of punch that is to be blamed for its inability to keep the audience hooked to each sequence - which is ideally how an espionage film works. Guggenheim took the CIA, and then toyed with the idea of an ex-agent, Tobin Frost (Denzel Washington), who sells intel. Why he wants to sell it is not an area that is explored, but there is a hint of patriotism and the need to expose corruption in the secret services across the world.

So wait, the traitor is the good guy? Yes. Why would Denzel Washington play a villain? Then there is Matt Weston (Ryan Reynolds), who is the "housekeeper" of a CIA safe house in Cape Town. He has been dying to shift to a more exciting role of his profession, like field work. David Barlow (Brendan Gleeson), Matt's senior and mentor, asks him to wait for a while.

Now what the hero of the film wants, he gets, right? So when Tobin is arrested, he is brought to this particular safe house for interrogation, and, just like that, Matt gets the excitement he craves.

Matt is in awe of Tobin, because the latter is a legend. There is some discussion between the CIA senior operatives about the complications in seeking the help of the South African government. Catherine Linklater (Vera Farmiga) and David Barlow are sent to the country, when things become messy and both Tobin and Matt go missing.

Some of the sequences, such as the fights and the chases, are so badly done that you marvel at the tackiness. Cinematography is not great, but manages to throw in a few stunning visuals now and then. Granted - South Africa has been done to death, but there must be so much more that can be explored in terms of action scenes. One car accident scene stands out, however, for its sheer unexpectedness. And the slum area portrayed in the movie has more character than the rest of the story, although the chase sequence in it is a little amateurish.

What makes Safe House worth watching is the performance by the leads. Denzel Washington and Ryan Reynolds give it their best, probably to make up for the confusing plotline. Their chemistry on screen works well. The senior actor portrays his mysterious character rather well (unfortunately, the mystery is never explained). Reynolds presents his character's helplessness, obstinacy and confusion seamlessly.

Brendan Gleeson is always a pleasure to watch, for his effortless acting. Vera Farmiga could have done with a little more screen time - her character does not have much to do, but Vera makes it a memorable one.

If you want to know more about the CIA, then either revisit The Good Shepherd, or wait for what seems to be fun take on the agency, This Means War. Or watch Safe House, where no one is safe, just for the acting.
Share. Save. Connect.
Tweet
SAFE HOUSE SNAPSHOT

ADVERTISEMENT
This page was tagged for
Safe House english movie
Safe House reviews
release date
Denzel Washington, Ryan Reynolds
theatres list
Follow @fullhyderabad
Follow fullhyd.com on
About Hyderabad
The Hyderabad Community
Improve fullhyd.com
More
Our Other Local Guides
Our other sites
© Copyright 1999-2009 LRR Technologies (Hyderabad), Pvt Ltd. All rights reserved. fullhyd, fullhyderabad, Welcome To The Neighbourhood are trademarks of LRR Technologies (Hyderabad) Pvt Ltd. The textual, graphic, audio and audiovisual material in this site is protected by copyright law. You may not copy, distribute, or use this material except as necessary for your personal, non-commercial use. Any trademarks are the properties of their respective owners. More on Hyderabad, India. Jobs in Hyderabad.