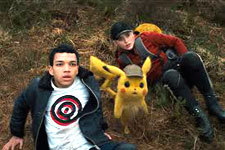 Punarvasu Pendse / fullhyd.com
EDITOR RATING
7.0
Performances
Script
Music/Soundtrack
Visuals
7.0
6.0
7.0
9.0
Suggestions
Can watch again
No
Good for kids
Yes
Good for dates
Yes
Wait to rent it
No
Making box-office hit adaptations out of successful video games is something Hollywood has always struggled at. If you leave out last year's reboot of Tomb Raider, no recent adaptation of a video game has been very successful (and even Tomb Raider itself was not that great, come to think of it). Pokémon Detective Pikachu tries to fix that by focusing on the target audience, making sure those who are already involved in the Pokémon franchise have an enjoyable experience.

Pokémon Detective Pikachu sees director Rob Letterman make an honest attempt at explaining the vast world of Pokémon to the uninitiated, while also peppering plenty of "woah" moments throughout the movie's 104-minute runtime for hardcore fans of the franchise. Letterman also helped write the screenplay for the movie, which certainly helps.

Pokémon Detective Pikachu opens with a delightful sequence explaining the concept of Pokémon trainers and providing you an introduction to Tim Goodman (Justice Smith). Goodman has to suddenly and unexpectedly leave for Ryme City to tend to his father's affairs after learning that he passed away in a car accident. Ryme City just so happens to be a haven for human-pokémon bonding where Pokémon don't just live in the wild, and Pokémon battles are outlawed.

Goodman meets Detective Pikachu (voiced by Ryan Reynolds) - a coffee-addicted, fluffy bundle of sass that just happens to be his father Harry Goodman's partner. Pikachu suspects that not all is what it appears to be, and that there is more to the car crash than what meets the eye. Goodman teams up with aspiring journalist Lucy Stevens (Kathryn Newton) to solve his father's disappearance and to uncover the bigger mystery behind it.

Pokémon Detective Pikachu gets a lot of things right - the gorgeous visuals that the futuristic city of Ryme has to offer, the many varied Pokémon, the fantastic contrast between the adorable Pikachu and Ryan Reynold's fast-talking, quick-witted snark (almost like a toned-down version of Deadpool), and the unexpected (sometimes almost dark) humour. But world-building has to be the feather in its cap - exploring Ryme City and its quirky humans and Pokémon is a joy to behold.

Pokémon training and battling, which is the focus of almost all of the Pokémon games and video adaptations so far, is briefly toyed with by the script without putting too much emphasis on it. It opens up the possibility of a more traditional sequel with making it seem very obvious. The target audience, along with the usual young and teenage demographic, are the older fans of the franchise - the movie invites them to believe again, the ones who have been distanced from Pokémon for a while.

Ryan Reynolds is on top of his game as the titular detective Pikachu, somehow managing to blend his larger-than-life persona with the tiny, lovable Pokémon. Pikachu, as a character, almost deserves a credit of its own, being singularly the most recognized part of the Pokémon universe. Justice Smith plays Tim Goodman with heart, injecting the character with some wry humour that meshes well with Reynold's comic timing.

Kathryn Newton's Lucy Stevens is the possible love interest and human sidekick to Goodman, but her character has too much going on, and not all of it is resolved at the end. Bill Nighy plays an unusual role of the ageing philanthropist Howard Clifford, and does it well, but at no point are we under the illusion that this movie isn't all about Pikachu and Goodman.

The movie has a cameo from singer Rita Ora, as a scientist working for Clifford, and she also croons the distinctly hummable title-track "Carry On". The music by Henry Jackman pays tribute to the animated show with its title track referenced to multiple times (and Reynolds humming it as Pikachu is very endearing).

Pokémon Detective Pikachu is not for everyone. The film gives you the basics of the Pokémon universe, but doesn't make any real attempt to explain it properly to the unenlightened. That doesn't mean the average viewer can't enjoy it, but it will require some preliminary effort on their part to at least get the basic background.

What Pokémon Detective Pikachu does very well, though, is to present a well-made world in astonishing photorealistic detail to someone who is already involved with the franchise. If you knew beforehand that a Thunderstone is required to evolve Pikachu, you'll likely have a blast.
Share. Save. Connect.
Tweet
POKEMON DETECTIVE PIKACHU SNAPSHOT 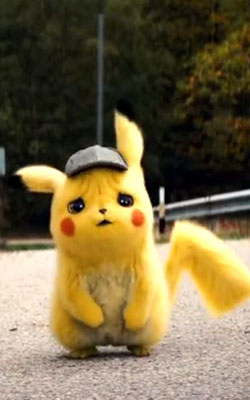 ADVERTISEMENT
This page was tagged for
Pokemon Detective Pikachu english movie
Pokemon Detective Pikachu reviews
release date
Ryan Reynolds, Justice Smith
theatres list
Follow @fullhyderabad
Follow fullhyd.com on
About Hyderabad
The Hyderabad Community
Improve fullhyd.com
More
Our Other Local Guides
Our other sites
© Copyright 1999-2009 LRR Technologies (Hyderabad), Pvt Ltd. All rights reserved. fullhyd, fullhyderabad, Welcome To The Neighbourhood are trademarks of LRR Technologies (Hyderabad) Pvt Ltd. The textual, graphic, audio and audiovisual material in this site is protected by copyright law. You may not copy, distribute, or use this material except as necessary for your personal, non-commercial use. Any trademarks are the properties of their respective owners. More on Hyderabad, India. Jobs in Hyderabad.