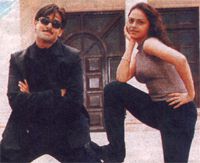 Christopher Domingo / fullhyd.com
EDITOR RATING
7.5
Performances
Script
Music/Soundtrack
Visuals
NA
NA
NA
NA
Suggestions
Can watch again
NA
Good for kids
NA
Good for dates
NA
Wait for OTT
NA
It's pretty close to what U2 meant in All the promises we make, from the cradle to the grave / when all I want is love, when all I want is you... - only, Nuvve Kaavaali is not as heady. It makes you feel real good to be in college. Or real bad to be out, as the case might be. Don't go by the words on the posters all around the city - Nuvve Kaavaali is a love story... and a good one too. Usha Kiran Movies has come up with a second consecutive winner after Chitram. Despite a fair number of mushy movies for a couple of years now, the queues for Nuvve Kaavaali make it evident that the crowds haven't had enough.

The film is a story of two friends, Tarun (Tarun) and Madhu (Richa), who have all the stereotypical requirements for friendship - they are born on the same day and in the same hospital, they've studied in the same school, are pursuing their degrees in the same college, and, yes, are neighbors. The first half is all about these friends - childish pranks, petty quarrels, tender moments and life on campus. The second half is about Tarun's realization that he loves Madhu and his dilemma of to say or not to say, based on a feeble fear that he will lose her. Things reach the flash point when Madhu is engaged to Ashok (Sai Kiran).

Nuvve Kaavaali has nothing new or unique as far as the storyline or script is concerned. But, it has an excellent director, A-grade cinematography and a competent star cast. Remember Tarun, that cute little child artiste from the heart-warming movie Anjali? Well, he has blossomed into a young man and debuts in this movie. And, judging by the reaction of the fairer sex in the audience, he is as cute as ever. Tarun has a lot of promise as an actor but his chocolate boy looks might typecast him. Richa is cute and cuddly, but lacks the voluptuousness that sets Telugu screens on fire. One fears that she will remain that pretty girl who came and went. Koti's music is a blast - with peppy beats and lots of fusion, these compositions are youthful and pleasant.

Nuvve Kaavaali is a wholesome and refreshing entertainer. Go for it.
Share. Save. Connect.
Tweet
NUVVE KAAVAALI SNAPSHOT

ADVERTISEMENT
This page was tagged for
Nuvve Kaavaali telugu movie
Nuvve Kaavaali reviews
release date
Tarun, Richa
theatres list
Follow @fullhyderabad
Follow fullhyd.com on
About Hyderabad
The Hyderabad Community
Improve fullhyd.com
More
Our Other Local Guides
Our other sites
© Copyright 1999-2009 LRR Technologies (Hyderabad), Pvt Ltd. All rights reserved. fullhyd, fullhyderabad, Welcome To The Neighbourhood are trademarks of LRR Technologies (Hyderabad) Pvt Ltd. The textual, graphic, audio and audiovisual material in this site is protected by copyright law. You may not copy, distribute, or use this material except as necessary for your personal, non-commercial use. Any trademarks are the properties of their respective owners. More on Hyderabad, India. Jobs in Hyderabad.