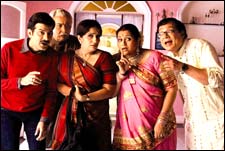 Deepa Garimella / fullhyd.com
EDITOR RATING
4.0
Performances
Script
Music/Soundtrack
Visuals
8.0
4.0
5.0
6.0
Suggestions
Can watch again
No
Good for kids
Yes
Good for dates
Yes
Wait for OTT
Yes
Don't let the rating mislead you - this silly Gujarati household hasn't lost its charm yet, and this movie does make for a pretty cozy Sunday afternoon family watch. The trick is to be able to like Khichdi as a concept, and to have been among those who wholeheartedly enjoyed its successful run on TV.

The nature of the humour is intact - Praful and Hansa Bhabhi still are the quintessential dimwits, Babuji is as exasperated as ever with them, and the kids still are smarter than everyone in the household combined. However, the movie, as is easy to expect, doesn't have the crispness of the serial, given that it stretches the PJ experience well beyond its funniness level.

Satish Shah's opening act sets the ball rolling. Shah, in a guest appearance, plays the Almighty, who is stumped by the inanity of the Parekhs. The head of the family, Babuji (Anand Desai), is the only sign of sanity among the Parekh family. Babuji's son Praful (Rajeev Mehta), his daughters-in-law Hansa (Supriya Pathak) and Jayshree (Nimisha Vakharia), and Hansa's brother Himanshu (J D Majethia) together have an IQ lesser than that of a human foetus.

The Parekhs are now on a mission to find a bride for Himanshu, a tougher thing to do than getting Angeline Jolie to stop adopting kids. It's a challenge at first, but sooner than you realize, he's getting engaged to the harebrained Parminder (Kirti Kulhari) next door, a girl in a menage of lunatic sardars. Himanshu's grouse now is that the whole match-making was effortless, unlike the strife-ridden love story he had always wanted to have.

Kapadia uses his joke formulas to tirelessly spin out the gags, and Supriya Pathak, Rajeev Mehta and Anand Desai execute them with characteristic aplomb. As the film progresses, however, the jokes start weakening - the assembly-line humour doesn't keep up with the standards throughout the 2 hours that this flick runs for. You're amused, but beyond a point you start being amused just because you want to be polite to the series.

And if not for Supriya Pathak, the movie would have been quite the damp squib of endless SMS jokes. She fills the screen - literally too, uncharitable as it may seem - with some sort of a magical sweetness that makes even the black humour seem harmless. She's also the most resplendent of characters in the flick, apart from the gigantic Punjabi family next door.

Praful and Babuji are brilliantly played as well, but changing the actress who plays Jayshree may not have been the best of ideas.

The songs needn't have been around - the few music sequences that are present are parodies, and are among the unfortunate instances of forced humour in the movie.

Watch Khichdi for the cuteness, that is still intact, and to rediscover the alarming mindlessness that the Parekhs epitomize. Or if you don't get tickets to much else this weekend - this one is among the cheerful movies around town now.
Share. Save. Connect.
Tweet
KHICHDI - THE MOVIE SNAPSHOT

ADVERTISEMENT
This page was tagged for
khichdi the movie part 2 in hindi
Khichdi - The Movie hindi movie
Khichdi - The Movie reviews
release date
Supriya Pathak, Anand Desai
Follow @fullhyderabad
Follow fullhyd.com on
About Hyderabad
The Hyderabad Community
Improve fullhyd.com
More
Our Other Local Guides
Our other sites
© Copyright 1999-2009 LRR Technologies (Hyderabad), Pvt Ltd. All rights reserved. fullhyd, fullhyderabad, Welcome To The Neighbourhood are trademarks of LRR Technologies (Hyderabad) Pvt Ltd. The textual, graphic, audio and audiovisual material in this site is protected by copyright law. You may not copy, distribute, or use this material except as necessary for your personal, non-commercial use. Any trademarks are the properties of their respective owners. More on Hyderabad, India. Jobs in Hyderabad.