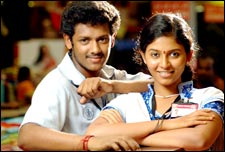 Deepa Garimella / fullhyd.com
EDITOR RATING
3.0
Performances
Script
Music/Soundtrack
Visuals
7.0
3.0
6.0
6.0
Suggestions
Can watch again
No
Good for kids
No
Good for dates
No
Wait for OTT
Yes
Pain-soaked movies are a genre all by themselves. Shopping Mall is one of those creations - the award-nominees (the original Tamil version, called Angaadi Theru, was almost a submission to the Academy Awards) that consist of milking all the distress out of an already agonizing situation.

Basically, nothing good ever happens to the nice guys in stories like these. The nice guys suffer a lot, and their suffering increases exponentially, to points of no return. Characters go from merely painful situations, to utter wretchedness. The journeys are punctuated by bitterness, soreness, and plenty of wailing, and rays of hope are rudely blanked out.

And it can be tough to sit through a film like that unless you've specifically come to "critically acclaim" it. While Shopping Mall is a flick with technical prowess and a hard-hitting theme, its plot doesn't have a clear path towards a logical end. Its sole purpose seems to be to tell us what pitiable conditions shopping mall staff live/work in, and to keep reinforcing the notion in every breath it takes, without taking the story anywhere of consequence.

The story is set in a gigantic textile store in Chennai, whose obscene profit-making capacity is in sharp contrast with the sweatshop-like conditions of its workers. The young uniformed staff members - who man the sales and haul goods to and from the godowns - are picked from poor families from villages, and silently bear abusive managers and inhuman living conditions.

The abuse is of all dimensions - physical, emotional, monetary and even sexual, in the case of the girls - but everyone silently bears it all since no one's street-smart enough, as yet at least, to look for jobs elsewhere. Love stories are cruelly nipped in the bud, with one case even resulting in a suicide jump off a window of the mall. In the midst of all this misery blossoms a romance between the gentle and hardworking Siva (Mahesh) and the firebrand Kani (Anjali).

Shopping Mall is your quintessential artsy tragedy. Like we said, it's not an easy film to accompany your popcorn. The mood of the film is loudly bitter in the first place, and is accentuated by repetitive sequences of mall-workers getting caught in pathetic situations and being severely punished, and characters screaming a lot in general.

There's a suffocating overdose of emotions and intensity: the absolutely evil mall manager and the owner, and the depressingly helpless employees clash in as many ways as possibly, with nothing ever going right. Sub-plots exist, too, intending to showcase different messages, but they are linked to the story mostly to show more and more pain. For example, there is a lengthy sequence telling us the travails of Kani's younger sister, a maid in a Brahmin household, who has "matured" and who Kani must take care of.

The lead pair is pretty good at the performances, with the heroine being particularly bright and spontaneous. The hero's sidekick is quite talented, and the mall manager and the owner seem like seasoned actors. Sneha appears in a cameo as herself.

However, impressive camera work and well-composed song make this a decent package for the film festival crowd. The visuals are completely Tamil - the sign-boards and other lettering continue to be in Tamil, and so does the general dressing and style.

ADVERTISEMENT
This page was tagged for
shopping mall telugu songs
shopping mall telugu full movie
Shopping Mall telugu movie
Shopping Mall reviews
release date
Follow @fullhyderabad
Follow fullhyd.com on
About Hyderabad
The Hyderabad Community
Improve fullhyd.com
More
Our Other Local Guides
Our other sites
© Copyright 1999-2009 LRR Technologies (Hyderabad), Pvt Ltd. All rights reserved. fullhyd, fullhyderabad, Welcome To The Neighbourhood are trademarks of LRR Technologies (Hyderabad) Pvt Ltd. The textual, graphic, audio and audiovisual material in this site is protected by copyright law. You may not copy, distribute, or use this material except as necessary for your personal, non-commercial use. Any trademarks are the properties of their respective owners. More on Hyderabad, India. Jobs in Hyderabad.