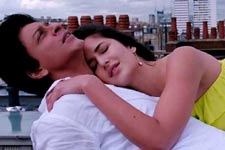 Deepa Garimella / fullhyd.com
EDITOR RATING
7.0
Performances
Script
Music/Soundtrack
Visuals
9.0
5.0
6.0
8.0
Suggestions
Can watch again
No
Good for kids
No
Good for dates
Yes
Wait for OTT
No
The way to a happily-ever-after is invariably paved with broken hearts. With a broken engagement on the way. And maybe a broken marriage. But ladies and gentlemen, this is a Yash Chopra movie, so let's celebrate "true love" that "even God cannot say no to"!

There are two things you must remember when you watch Jab Tak Hai Jaan. The first is that this is a Yash Raj film - and that hence, it is going to be cheesy. This is a movie in which if a woman is not jumping ecstatically during her engagement there is something very wrong - so wrong that the hero must definitely point this out to the bride herself, and mess with her mind. This is a triangular love story in which one of the protagonists is retrograde amnesia. And this is one hell of a long movie.

The second thing you must keep in mind here is that there can never be a DDLJ again. Times have changed, audiences have changed (literally - this is not the same generation as a decade ago), and Shah Rukh Khan has aged. To their credit, the Chopras have tried to board the bus running. Their films in these times aren't memorable works of art, but because of all the gloss, they still have that immense watchability that movies made on that scale sometimes do. There is an awkwardness in how the movies are trying to fit in in this age of "instant make-out, instant break-up" (one of Anushka's lines in JTHJ). For example what are words like "as***le" and "bi***" doing in a YRF film? But then, somehow, the films are getting somewhere.

Jab Tak Hai Jaan is a story of undying love between Mira (Katrina Kaif) and Samar Anand (SRK - playing a 24-year-old). Samar is now in the bomb disposal squad in J&K, and as aspiring documentary-maker Akira (Anushka Sharma) discovers, he has a mysterious past.

The past is a love story. Harsh vows are made in massive beautifully-lit churches, and even more harshly kept over decades. In the meantime, love is lost, found in odd places, and in the end, regained. And of course, a heart or two is broken along the way.

JTHJ works not because the sentimentality and the mush sweep you off your feet, but because it is all bloody engaging to watch. Despite the television-serial kind of melodrama (amnesia? really?) and morally shaky endorsements of love (as in the case of Mira's mom, adultery is justified in the name of "pyaar"), this is a fascinating story that unfolds, simply because it exists. Maybe you're better off watching JTHJ not as an advertisement for true love, but as a star-powered movie.

Shah Rukh Khan plays a 25-year-old for some part of the movie, and while he clearly understands it is not working, there is plenty of grace with which he conducts himself. For the rest of the film, he is a treat to watch, going through product placements and romantic one-liners with equal ease.

For those of us who've grown up watching SRK romance Juhi and Kajol, it sure is hard to watch him alongside anyone else - even a mature Katrina. The stars work hard at overcoming their very evident lack of chemistry, and they succeed to an extent. Were they to have that romantic spark, JTHJ would have probably done better for itself.

Anushka Sharma starts off grating, but ends up as perhaps the sweetest character in JTHJ. It's only amazing how she is able to wear all those hot pants and sleeveless tops in Jammu.

Anupam Kher disappears unceremoniously into the folds of this gloss-fest, Rishi-Neetu Kapoor are in a cameo that you somehow cannot be comfortable enjoying, and Sarika is a pleasant watch.

Rahman's music doesn't blend in - it is completely a matter of taste. As for the visuals, there is no dearth of budget or good taste. London gets more screentime than Jammu, and it is all nice to sit through, albeit cold and wintry throughout.

Watch JTHJ for some sugar, cheese and fluff. And if it gets too long, remember, as Anushka says in the film, "you've just got to hang in there". Yash Chopra did.
Share. Save. Connect.
Tweet
JAB TAK HAI JAAN SNAPSHOT 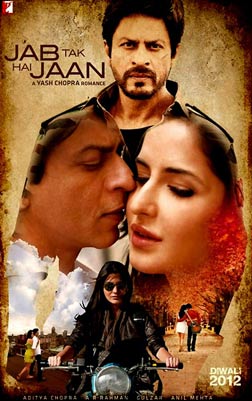 ADVERTISEMENT
This page was tagged for
Jab Tak Hai Jaan hindi movie
Jab Tak Hai Jaan reviews
release date
Shahrukh Khan, Katrina Kaif
theatres list
Follow @fullhyderabad
Follow fullhyd.com on
About Hyderabad
The Hyderabad Community
Improve fullhyd.com
More
Our Other Local Guides
Our other sites
© Copyright 1999-2009 LRR Technologies (Hyderabad), Pvt Ltd. All rights reserved. fullhyd, fullhyderabad, Welcome To The Neighbourhood are trademarks of LRR Technologies (Hyderabad) Pvt Ltd. The textual, graphic, audio and audiovisual material in this site is protected by copyright law. You may not copy, distribute, or use this material except as necessary for your personal, non-commercial use. Any trademarks are the properties of their respective owners. More on Hyderabad, India. Jobs in Hyderabad.