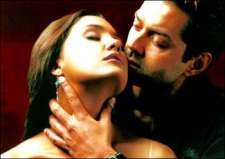 Rohit Murari / fullhyd.com
EDITOR RATING
6.0
Performances
Script
Music/Soundtrack
Visuals
NA
NA
NA
NA
Suggestions
Can watch again
NA
Good for kids
NA
Good for dates
NA
Wait to rent it
NA
An average fullhyd.com reviewer would be able to solve the supposed murder mystery in Jurm before anyone could say http://www.fullhyderabad.com/scripts/profiles.php3?section=Movies&name=Jurm. So, what if an avid movie buff could do it in half the time? The fact remains that the avid movie buff can decide to leave after that where as the fullhyd.com reviewer has no such luxury. Even so, sometimes he is not disappointed that he had to park himself in the theater for the entire duration of the movie.

Avinash Malhotra (Bobby Deol) is our typical super-rich hero of the type made famous by the actor playing him in Humraaz - responsible, ethical, and a sucker for any woman who decides to strut her stuff for him. In other words, he is like any other guy. Except that he decides to fall for a woman (Sanjana, played by Lara Dutta) who does not even do that, which makes you question his sensibilities.

Sonia (Gul Panaag) is his best friend in the whole world. Put simply, she is madly in love with him while he is blissfully unaware of her feelings. So when he gets married to Sanjana, it is but obvious that she (Sanjana) is going to die, and that he is going to be the prime suspect in his wife's murder. His friend Rohit (Milind Soman) moves the earth to defend him, but he is sentenced to life. No, not Rohit - Avinash is sentenced to life, although the act of defending such a non-actor is dastardly enough. The rest of the movie is about Avinash proving his innocence, and finding retribution.

For the most part, Jurm moves at a nice pace. Nothing that gets your hair at the back of your neck to stand up, but there is the occasional where-did-that-come-from moment. However, the scene between Shakti Kapoor (as the cruel maama) and Gul Panaag should have been done a little more tastefully, or better still, scrapped altogether.

It is a Vikram Bhatt movie. So the music and background score are both good. Milind Soman more than holds his own despite not having an author-backed role. Sadly, that can't really be said for Bobby Deol. And yes, the women look gorgeous even when they are in the most desperate of situations.

Basically, a movie that you can enjoy if you don't expect the world of it.
Share. Save. Connect.
Tweet
JURM SNAPSHOT

ADVERTISEMENT
This page was tagged for
Jurm hindi movie
Jurm reviews
release date
Bobby Deol, Lara Dutta
theatres list
Follow @fullhyderabad
Follow fullhyd.com on
About Hyderabad
The Hyderabad Community
Improve fullhyd.com
More
Our Other Local Guides
Our other sites
© Copyright 1999-2009 LRR Technologies (Hyderabad), Pvt Ltd. All rights reserved. fullhyd, fullhyderabad, Welcome To The Neighbourhood are trademarks of LRR Technologies (Hyderabad) Pvt Ltd. The textual, graphic, audio and audiovisual material in this site is protected by copyright law. You may not copy, distribute, or use this material except as necessary for your personal, non-commercial use. Any trademarks are the properties of their respective owners. More on Hyderabad, India. Jobs in Hyderabad.