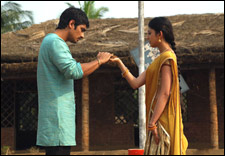 Deepa Garimella / fullhyd.com
EDITOR RATING
3.0
Performances
Script
Music/Soundtrack
Visuals
6.0
3.0
3.0
6.0
Suggestions
Can watch again
No
Good for kids
No
Good for dates
No
Wait for OTT
No
There are several things that audiences shouldn't be allowed to do in theatres when the hero is emoting with complete focus, but in return, there are several things that actors shouldn't be allowed to do on screen either. Bava such a bad film it's hard to say what makes it bad exactly. Actually, sitting through 3 hours - or maybe it was 3 days, it's, well, hard to say - of this one makes it gets hard to say anything at all.

Veerababu (Siddharth), we are told, is part-stud-part-goof, who the people of his village hate and love equally. He falls in love with this girl Varalakshmi (Pranitha) from a neighbouring village, and tries to woo her. When all his attempts fail, he tells her that they were childhood sweethearts, and that he would be delighted to continue from where they left off in school. Now several of us have tried hard to forget certain memories - like we did of this film and will continue to after this review is done with - but for Varalakshmi, her innocent love was not one of them.

She has, apparently, even stored souvenirs of the romance, and promptly falls for the grown-up Veerababu. However, her father (Ahuti Prasad) is a tyrant who'd never approve of her marrying someone who's not from their social status. Actually, there are several other things that he doesn't approve of, but we refuse to list them here and work them out - does anyone list stuff that we don't approve of and stop releasing them in theatres? Same difference.

Anyway, it is discovered that the two families have a tragic past. Veerababu's father (Dr. Rajendra Prasad) married Varalakshmi's father's sister in a pretty reckless manner, and as a result, he and his wife were disowned by the latter's family. So technically, Veerababu and Varalakshmi, being bava-maradallu, are perfectly eligible to marry each other but deep-rooted family strife threatens to kill their love, and us as well.

Bava is a cliched, predictable flick with ambitious moments that fall flat. The comedy brings out a few chuckles, but overall, the movie is so devoid of basic thought that it's a wonder your brain doesn't die of malnutrition at the end of it all.

There's a bunch of actors who don't seem to be comfortable in this film. Siddharth does what he does, but turns into a caricature towards the end. Rajendra Prasad is in a rather pointless role doling out meaningless lines, and it's probably only Pranitha who's likely to get positive feedback from anyone who watches the flick.

Along with the faux countryside feel - unlike Allari Naresh movies that radiate ruralness in the charming way that only they can - and forced villager characterizations, there's Chakri's cacophony to deal with. In all, this is a film that you'd need prescription drugs to recover from.
Share. Save. Connect.
Tweet
BAVA SNAPSHOT

ADVERTISEMENT
This page was tagged for
Bava telugu movie
Bava reviews
release date
Siddharth, Pranitha
theatres list
Follow @fullhyderabad
Follow fullhyd.com on
About Hyderabad
The Hyderabad Community
Improve fullhyd.com
More
Our Other Local Guides
Our other sites
© Copyright 1999-2009 LRR Technologies (Hyderabad), Pvt Ltd. All rights reserved. fullhyd, fullhyderabad, Welcome To The Neighbourhood are trademarks of LRR Technologies (Hyderabad) Pvt Ltd. The textual, graphic, audio and audiovisual material in this site is protected by copyright law. You may not copy, distribute, or use this material except as necessary for your personal, non-commercial use. Any trademarks are the properties of their respective owners. More on Hyderabad, India. Jobs in Hyderabad.