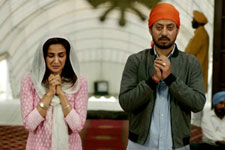 Vaishnavi Kulkarni / fullhyd.com
EDITOR RATING
7.0
Performances
Script
Music/Soundtrack
Visuals
8.0
6.5
8.0
6.0
Suggestions
Can watch again
No
Good for kids
No
Good for dates
No
Wait for OTT
Yes
Indian society is no stranger to discrimination. People are treated with disdain on account of their colour, caste, religion, and even marital status. And a person's ability to speak English well is another scale to measure their worth by, with the chasms between social classes filled with the differences in accents and pronunciations.

Much like this country's obsession with equating a fair complexion to loveliness, the (sometimes unconscious) bias against those who can't quote Blake and Wordsworth at the drop of a hat is perhaps part of a colonial hangover. With Hindi Medium, Saket Chaudhary attempts to put forth a humorous social commentary on this angrez-craze, as well as on the sorry state of the education system today. The success of his stint with satire, however, is up for debate.

Hindi Medium follows the escapades of Meeta (Saba Qamar) and Raj Batra (Irrfan Khan) in their quest to get their pre-schooler Pia into an elite private school, thus paving her way into a world of social snobbery and classism that is just out of their reach.

The young beginnings of their romance are illustrated in a very sweet and subtle way, in a sequence full of shy glances and secret smiles to the strains of Atif Aslam's crooning ("Hoor"). Delzad Hiwale and Sanjana Sanghi, who play the younger versions of the lead pair, let their expressions do the talking, and perform admirably in the short montage that they are afforded.

We skip ahead to 15 years down the road: Raj, born and bred in Chandni Chowk, is the owner of a large garment shop with lots of wealth but little social standing. He dotes on his wife Meeta, a social climber and an overly-protective mother who is very concerned about the role that drugs may or may not play in her little 4-year-old's future.

Meeta is desperate to guarantee her daughter a bright future, and Raj is prepared to go to any lengths to appease her. You laugh as he leaves his home in Chandni Chowk with all the emotional turmoil of a young bride, and cringe with vicarious embarrassment at his antics amongst the posh crowd of Vasant Vihar, where he sticks out like a sore thumb.

The Batras aren't easily dissuaded, though, and explore every available avenue to get into Delhi Grammar School - from hiring an agent who specialises in admissions, to wads of cash and letters of political influence, to finally going as far as applying fraudulently through the low-income quota. Unfortunately, much like the dengue-ridden mosquitoes they are soon to be acquainted with, this move comes back to bite them where it hurts.

When Ms. Lodha (Amrita Singh), the seemingly principled school principal, is accused by the press of admitting rich kids into the poor man's quarter, she dismisses these charges as unfounded (or to quote Shashi Tharoor, as an "exasperating farrago of distortions, misrepresentations and outright lies being broadcast by an unprincipled showman masquerading as a journalist"). An investigation into the veracity of these claims is sanctioned, and Raj is faced with the possibility of going to jail.

The premise of the movie is expounded upon in a hyperbolic way - while people may not actually take such drastic measures in reality, they still go pretty extreme, and that is disheartening. The Batras temporarily adopt the guise of a family struck by sudden poverty, and the contrast between life with the rich and with the poor is highlighted in the most stereotypical way possible - the poor folk practice all the lessons on sharing and love that the rich merely preach. However, the film succeeds in getting the point across amidst all the exaggeration.

The film's biggest failure is the downward spiral it descends into after the interval. Characters behave in a manner that is at complete odds with everything you have learnt about them, and incidents seem to occur for no purpose other than to needlessly prolong the plot. The humour becomes stale, and the storytelling, lazy. The ending is both long-winded and strangely abrupt all at once, leaving you unsatisfied with the poorly-constructed conclusion after such a meandering journey to get there.

Yet, despite its faults, Hindi Medium is a movie worth watching. The way it challenges mindsets and educational norms is ultimately spot on, and it manages to entertain and amuse for the most part. What it lacks in execution, it makes up for in intention and good casting.

Irrfan Khan is the best thing about the movie. His comic timing is excellent, and he proves his mettle with every facet of his character - be it the goofy father, the quaintly romantic husband, or the friend with a good heart and a guilty conscience. Saba Qamar complements his talent well, and plays her part with just the right amount of emotion and vivacity. Her Meeta is likeable and witty in spite of having expectations and aspirations that run a bit too high.

Although Amrita Singh's character has some inconsistencies that cannot be ignored, she makes do with her lot and delivers a genuine performance. Deepak Dobriyal suits his role as the stranger-turned-friend with a heart of gold. He is instrumental to the progression of Raj's and Meeta's character arcs, and makes you feel for his character with his heartfelt portrayal of Shyam Prasad.

The film's cinematography and editing are nothing of note, but its soundtrack is perfect. The songs draw you into the scenes and give the movie an additional layer of emotion. The Delhi vibe of the music is a bonus that takes you to the locales of the film. They are certainly worth adding to your playlist.

Hindi Medium has its share of flaws, but it is definitely worth a watch. If there is the slightest chance of it inspiring you to single-handedly renovate a government school in a few months, why not give it go?
Share. Save. Connect.
Tweet
HINDI MEDIUM SNAPSHOT 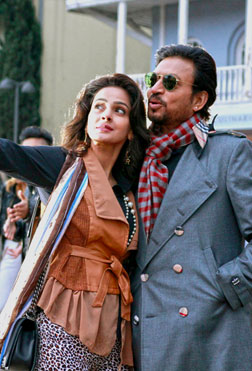 ADVERTISEMENT
This page was tagged for
Hindi Medium hindi movie
Hindi Medium reviews
release date
Irrfan Khan, Saba Qamar
theatres list
Follow @fullhyderabad
Follow fullhyd.com on
About Hyderabad
The Hyderabad Community
Improve fullhyd.com
More
Our Other Local Guides
Our other sites
© Copyright 1999-2009 LRR Technologies (Hyderabad), Pvt Ltd. All rights reserved. fullhyd, fullhyderabad, Welcome To The Neighbourhood are trademarks of LRR Technologies (Hyderabad) Pvt Ltd. The textual, graphic, audio and audiovisual material in this site is protected by copyright law. You may not copy, distribute, or use this material except as necessary for your personal, non-commercial use. Any trademarks are the properties of their respective owners. More on Hyderabad, India. Jobs in Hyderabad.