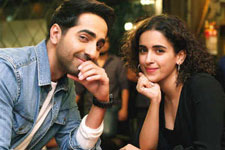 T J Reddy / fullhyd.com
EDITOR RATING
8.0
Performances
Script
Music/Soundtrack
Visuals
9.0
9.0
6.0
8.0
Suggestions
Can watch again
Yes
Good for kids
Yes
Good for dates
Yes
Wait to rent it
No
At a juncture in Puri Jagannadh's underrated film Neninthe, director Harish Shankar laments the fact that he has to write stories centred around mass-murdering heroes. After hearing this comment, a commoner retorts, "We have to watch these movies because you make these movies. Don't forget that Shankarabharanam and Sagara Sangamam were hits because we watched them." He concludes by daring filmmakers to do better and dream better. That man was a conduit to an emotion shared by millions across the country. And Badhaai Ho is a film aimed at appeasing that man.

Set in a middle-class locale of Delhi, Badhaai Ho follows 9 months in the life of the Kaushik family as they react to an incident that can be termed as out of the ordinary (at the very least). Nearly 50 years old and a mother of two, Priyamvada Kaushik aka Babli (Neena Gupta) is pregnant again. While her beloved son Nakul (Ayushmann Khurrana) has fallen in love with the affable Renee (Sanya Malhotra) and is planning to start a life with her, Priyamvada is pregnant. As her younger son, Gular (Shardul Rana) is preparing for his board exams and going through adolescence, Mrs Kaushik is pregnant. While many of her middle-aged friends play tambola in the afternoons, watch TV soaps in the evening and hold latent grudges against their husbands who choose to snore instead of score, Babliji is expecting.

Make no mistake, the primary concept of Badhaai Ho is not far removed from a tired soap storyline. What elevates the material is its even-handed, mature, restrained, progressive and comical take on its subject matter. It is a film that chooses against dwelling on its premise and instead builds on it. This approach mirrors the mindsets of the lead duo, Priyamvada and Jeetender Kaushik (Gajraj Rao). The lovable parents (who are the walking embodiments of #relationshipgoals) make their peace with their predicament almost as soon as they are made privy to it. The people around them, however, are not so understanding. Their task is to steer through a proverbial minefield.

What could have easily veered into mind-numbing melodrama is constantly saved by the film's choice to respect its audience's intelligence. Clocking in at a brisk 120 minutes, the movie explores heady ideas such as pro-life vs pro-choice, sex education, the importance of intimacy, societal pressures, class hierarchy and plain communication with one's family, with aplomb. Rather than zeroing in on one of these ideas and resorting to tedium, the filmmakers ably navigate multiple sub-plots by peppering them with witty dialogue and slick non-sequiters while never failing to do right by the subject matter at hand.

Writing, though, is clever only when the actors tasked with embodying fully-fledged characters are firing on all cylinders as well. While the film credits Ayushmann Khuranna as its leading man, this is an ensemble piece. Every actor listed above and the incomparable Surekha Sikri (whose last memorable role was in Balika Vadhu) all play off each other to great effect. Every one of them is given is an arc to work through, and ideals to strive towards.

The ideals come in the form of the soon-to-be parents (again), Babli and Jeetu. Rarely are we treated to the such welcome presences on the silver screen. They don't need duets or foreign locales, nor do they require speeches professing their love for each other. The fact that Jeetu shares the small victories of life with his wife, the simple gesture of her letting him rest his head on her shoulder, and Jeetu asking his wife if she'd like cardamom or ginger in her tea, solidify their bond with each other beyond what oodles of slow-mo shots and juvenile mind games ever can.

Their home too is as cosy as they are. Scattered across it are stickers of Hanuman, a Good Knight mosquito repellent in one of the sockets, and a car with their family name plastered across its rear window parked across the street. The film's meticulous set design and soft lighting are not a subtle play at making the middle-classes look noble and discrediting the upper classes - they are deliberate, almost invisible, choices made to immerse an audience into the movie's vivid world. Nuance like this is as welcome as cardamom in a delightful cup of tea.

Every wholesome household has a dent in it, and this one's comes in the form of its music. While the songs are brief and apt, and don't overstay their welcome, and the score isn't overbearing, the choice to employ multiple composers plays spoilsport with the movie's tone. This is unavoidably evident near the film's climactic sequence as this unabashed romp is dragged down a few pegs, much to our dismay.

That being said, we were those commoners asking for something new from our artists. And we can say without a shadow of a doubt that, in this instance, they have delivered, and then some. We will watch stories of flawed young men who are making their way through the world while only briefly stopping to cycle between one of two jackets they own because we want to, not because we have to. If these stories encounter a stumble, we will help them up because we like them and the people in them on a personal level, and not because we are blinded by someone's star power. These stories and characters make us laugh, make us think, and are the true bearers of the term "paisa vasool".
Share. Save. Connect.
Tweet
BADHAAI HO SNAPSHOT 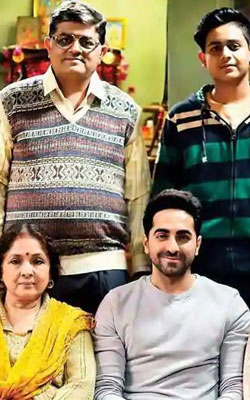 ADVERTISEMENT
This page was tagged for
badhaai hi full movie
Badhaai Ho hindi movie
Badhaai Ho reviews
release date
Ayushmann Khurrana, Sanya Malhotra
Follow @fullhyderabad
Follow fullhyd.com on
About Hyderabad
The Hyderabad Community
Improve fullhyd.com
More
Our Other Local Guides
Our other sites
© Copyright 1999-2009 LRR Technologies (Hyderabad), Pvt Ltd. All rights reserved. fullhyd, fullhyderabad, Welcome To The Neighbourhood are trademarks of LRR Technologies (Hyderabad) Pvt Ltd. The textual, graphic, audio and audiovisual material in this site is protected by copyright law. You may not copy, distribute, or use this material except as necessary for your personal, non-commercial use. Any trademarks are the properties of their respective owners. More on Hyderabad, India. Jobs in Hyderabad.