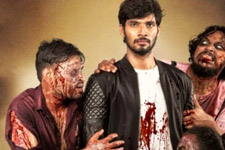 Anil Bandhakavi / fullhyd.com
EDITOR RATING
1.5
Performances
Script
Music/Soundtrack
Visuals
2.0
1.0
2.0
1.0
Suggestions
Can watch again
No
Good for kids
No
Good for dates
No
Wait to rent it
No
It seems like the coronavirus has propelled some Telugu filmmakers into experimenting with apocalyptic films about viruses and zombies. However, G-Zombie spares you concern for the human population as most of the film is just a cat-and-mouse game between humans and zombies on some lonely college campus. While overtly convoluted storylines slipping out of the writer's grip and missing the climactic mark are generally an issue with some experimental films, G-Zombie goes the other way by just dragging through nothingness after quickly establishing a simple plot.

Sarah (Divya Pandey) is a young scientist working on developing a vaccine for a contagious disease. She presents a method of conducting trials that impresses her boss, but he's not entirely keen on her idea to carry out these trials on humans instead of animals. She then recommends that these humans can be inmates on death row for heinous crimes. After consulting with a confidante about this idea, her boss gives her the go-ahead. He only adds the condition that Rudra (Aryan Gowra) will be part of the team for their safety.

At this point, you just have to give the writers fictional freedom and ignore the huge ethical question lingering in the air. Sarah even justifies the idea by asserting that the said inmates are waiting to die anyway.

Strongman Rudra shows up, and Sarah is noticeably irked because they share a romantic past that went sour. Rudra is secretly elated because this gives him a chance to get close to Sarah. Next, out of nowhere, a random guy calls Sarah to volunteer for the trial because he needs the money to support his pregnant wife. And so Rudra, Sarah, the volunteer and his pregnant wife, a prisoner bound in ropes, and a guy to watch over the prisoner, all hop onto a bus and head out of town to a deserted college campus to carry out the trial. The college campus, which was recently converted into a research institute for medicine, is run by a few staff members and a cook in the canteen.

The team just drags the bound prisoner into the medical trial, but we've already accepted that at this point. After a montage scene of experiments resembling those conducted by students in a chemistry lab, Sarah is ready with the formula to be injected into the subject. She inoculates him and informs the others that they will be able to monitor the results the next day. By this point, Sarah and Rudra are back in love with each other.

The next morning, Sarah is performing asanas in the college quadrangle when the subject wakes up as a zombie. He quickly starts zombifying others around him and they do the same, and now you have a handful of humans running away from a handful of zombies, on a college campus. The zombies have very poor vision and rely on their hearing after sunset, but do not seem to have any sense of smell. So now it's up to Rudra to figure out a plan to save as many humans as possible, while Sarah is mostly dejected that she jumped the gun on the vaccine trial.

G-Zombie feels like a semester assignment in a college course on cinematography. As such, the movie could've been wrapped up in 35 minutes. Instead, you sit through a two-hour hide-and-seek game with one generic twist after another. It was as though the purpose of the story was to quiz you on whether you spotted the location of the restrooms. Indeed, towards the end of the movie, one of the girls in a group of college students in the theatre walked out saying she'd make some IG reels while she waited for the rest of the group. This external event was the highlight of the movie-watching experience.

To end on a sweeter note, the crew members of this movie seem to be newcomers in the feature-film game. The screenplay is amateurish, ignoring many fundamental necessities and failing to generate any thrill or anticipation, and leaving everything to the viewer's imagination. Maybe the crew are on their way to delivering a real product in the future, and some of them might even become successful filmmakers down the road. For now, nothing like getting to practice your craft on big screen. 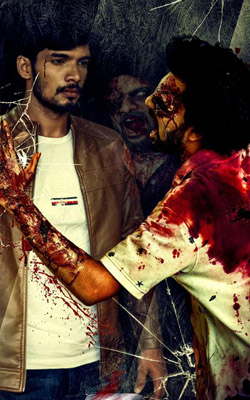 ADVERTISEMENT
This page was tagged for
G-Zombie telugu movie
G-Zombie reviews
release date
Aryan Gowra, Rajsekhar
theatres list
Follow @fullhyderabad
Follow fullhyd.com on
About Hyderabad
The Hyderabad Community
Improve fullhyd.com
More
Our Other Local Guides
Our other sites
© Copyright 1999-2009 LRR Technologies (Hyderabad), Pvt Ltd. All rights reserved. fullhyd, fullhyderabad, Welcome To The Neighbourhood are trademarks of LRR Technologies (Hyderabad) Pvt Ltd. The textual, graphic, audio and audiovisual material in this site is protected by copyright law. You may not copy, distribute, or use this material except as necessary for your personal, non-commercial use. Any trademarks are the properties of their respective owners. More on Hyderabad, India. Jobs in Hyderabad.