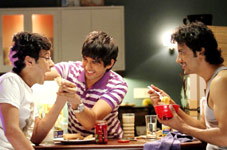 Nupur Barua / fullhyd.com
EDITOR RATING
4.0
Performances
Script
Music/Soundtrack
Visuals
6.0
4.0
5.0
5.0
Suggestions
Can watch again
No
Good for kids
No
Good for dates
Yes
Wait for OTT
No
Ho-hum. Yet another sequel. It has been four years since the original, though, and not many remember Pyaar Ka Punchnama, popular with both sexes then despite its misogynist tone. It was too in-your-face, but it was a breath of fresh air then. To repeat that now would be folly, and yet, Luv Ranjan is back, to drive home the point he made then.

Anshul/Gogo (Kartik Aryan), Siddharth/Chauka (Sunny Singh Nijjar) and Tarun/Thakur (Omkar Kapoor) are housemates. And friends. They love their lives, mostly because Gogo earns well and therefore they can party all the time. Their camaraderie is the stuff that legends are made of, and nothing can break them apart. Till the girls enter their lives.

It begins with Gogo falling head over heels in love with Ruchika/Cheeku (Nushrat Bharucha). Chauka is smitten enough to become the errand boy for the ultra-conservative Supriya (Sonalli Sehgal). And Thakur finds his muse in the ultra-modern Kusum (Ishita Sharma). Initially, the world the three couples inhabit, albeit in a state of happy delirium, is perfect.

However, love, as wise men know, is not all fun and games. The enormity of becoming emotionally dependent is made obvious when pettiness creeps in. Since you are already invested in the boys, the girls are the villains here. They whine and cry, manipulate and act coy, and declare themselves indispensable to the boys, all in the name of love. The naïve(!) men, independent otherwise, find themselves in the clutches of a spiralling series of events that threaten to destroy not only their brotherhood, but them, too.

As we said earlier, the novelty already wore off with the first movie. The only aspect this film could have scored in is the storyline, but that is weak, as are the plot points. Exaggerated situations - again, to drive home the point - do not contribute much to the screenplay. Most of them anyway concentrate on how difficult it is to handle women with opinions. What men deserve, if the script is to be believed, are malleable girls, who speak softly, and who obey and serve. Since it is all in good fun, though, you cannot be judgemental about this particular projected expectation of the fairer sex.

Some of the dialogues and one-liners are genuinely funny. The movie is, after all, a satire on love and romance. You may have to concentrate a bit to get the humour, though. However, when it veers toward the slapstick, you realise that the screenplay is not too intelligent. It is a simple story otherwise, and does not require either introspection or retrospection. Again, the misogyny is essential to enhance the absurdity of relationships, and it may seem offensive in parts, but it is a creative perspective of the director.

The main female leads are the same actors from the previous movie. Of the three, Nushrat Bharucha manages to deliver the best performance, even though it is very repetitive. She falters a bit, but she is the girl to watch out for. Ishita Sharma is instantly likeable, and promising. Sonalli Sehgal concentrates on looking hot - too obvious.

Kartik Aryan does not seem too pleased to be placed in a sequel in which he has to repeat his previous performance. He is decent, but not very enthusiastic. Omkar Kapoor, earlier a child actor, is confident and great fun. The most entertaining of the lot is Sunny Singh Nijjar, who may have to polish his act a bit, but is extremely watchable. Sharat Saxena, as usual, is a delight to watch, but he seems slightly subdued here.

The songs are forgettable, and there is just too much colour everywhere. The visuals have no personality, period. The film could have been snappier, had the editor been allowed to cut a few irrelevant sequences.

This is not a family movie, per se, but it could be fun to take your other half to watch it - as long as you do not expect life-altering solutions from the film. Otherwise, wait for the TV release, or revisit the original movie.
Share. Save. Connect.
Tweet
PYAAR KA PUNCHNAMA 2 SNAPSHOT 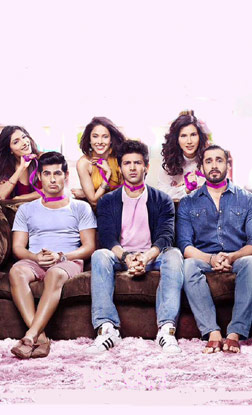 ADVERTISEMENT
This page was tagged for
mallepally ke Damad Ka Punchnama
Pyaar Ka Punchnama 2 hindi movie
Pyaar Ka Punchnama 2 reviews
release date
Kartik Aryan, Nushrat Bharucha
Follow @fullhyderabad
Follow fullhyd.com on
About Hyderabad
The Hyderabad Community
Improve fullhyd.com
More
Our Other Local Guides
Our other sites
© Copyright 1999-2009 LRR Technologies (Hyderabad), Pvt Ltd. All rights reserved. fullhyd, fullhyderabad, Welcome To The Neighbourhood are trademarks of LRR Technologies (Hyderabad) Pvt Ltd. The textual, graphic, audio and audiovisual material in this site is protected by copyright law. You may not copy, distribute, or use this material except as necessary for your personal, non-commercial use. Any trademarks are the properties of their respective owners. More on Hyderabad, India. Jobs in Hyderabad.