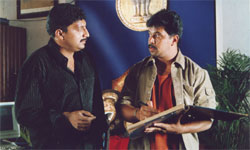 EDITOR RATING
5.0
Performances
Script
Music/Soundtrack
Visuals
NA
NA
NA
NA
Suggestions
Can watch again
NA
Good for kids
NA
Good for dates
NA
Wait to rent it
NA
What does the name hint to you? A film that has a lone hero battling lots of evil and fighting for justice? Bingo. If you're one of those rare species dying for those movies, here's one more.

The once-upon-a-time Telugu actor who metamorphosed into a superhero in Tamil, Arjun, excelled himself in action films and carved an image for himself in the hearts of the Tamilians. And his success in Tamil made the distributors in Andhra Pradesh dance with glee. For it is not necessary to introduce a former hero to the audiences, while, at the same time, if it is a reasonably good movie, the producers will have a windfall.

It might have been so with Arjun's other films but not with this one. This is an out-and-out boring film. The plot goes like this. Arjun (Arjun), with the gentle prodding of his father Ramaraju (Manivannan) appears for the civil services examination and gets selected for IAS. On his way to the Academy in Mussorie, he meets the jovial and talkative Priya (Abhirami) and Prakash (Prakash Raj), his would-be colleagues in the academy. They become friends and continue their friendship till their training is over. And this is a problem for Arjun because Prakash, who thinks money and power can buy him anything, falls in love with Priya while she opts for Arjun.

Like a snake in the grass, Prakash tries every possible means to make life difficult for Arjun. Consequently, on completion of training, Arjun is refused posting by the academy directors on the ground that he has cheated them by providing wrong information. Afraid that his father might not take the news too well, he stays with his girlfriend's parents. While there, Priya's sister dies on the mistaken notion that she has failed the examination. Arjun realises that it is not a mistake and takes the culprit to task. But in the scuffle the culprit dies. Arjun is in jail.

Prakash Raj becomes the jail superintendent and seeks vengeance on Arjun for stealing Priya from him. The movie goes on and on with all the unnecessary twists and turns making you feel bugged to the point of walking out of the theater. There is nothing interesting in the film. Prakash Raj and Arjun are their same old selves with no trace of novelty in their roles. The new heroine looks like Madhu Ranganathan, and that seems to be the only reason why she has been taken. Even if she wants to act, there is no scope for her. Manivannan tries to make you laugh with his comedy, and he succeeds to an extent. But he has a brief role in the film and so we don't have too many hilarious moments either.
Share. Save. Connect.
Tweet
ARJUNUDU SNAPSHOT

ADVERTISEMENT
This page was tagged for
arjunudu
Arjunudu telugu movie
Arjunudu reviews
release date
Arjun, Prakash Raj
Follow @fullhyderabad
Follow fullhyd.com on
About Hyderabad
The Hyderabad Community
Improve fullhyd.com
More
Our Other Local Guides
Our other sites
© Copyright 1999-2009 LRR Technologies (Hyderabad), Pvt Ltd. All rights reserved. fullhyd, fullhyderabad, Welcome To The Neighbourhood are trademarks of LRR Technologies (Hyderabad) Pvt Ltd. The textual, graphic, audio and audiovisual material in this site is protected by copyright law. You may not copy, distribute, or use this material except as necessary for your personal, non-commercial use. Any trademarks are the properties of their respective owners. More on Hyderabad, India. Jobs in Hyderabad.