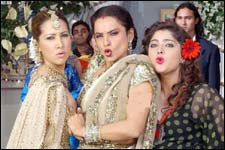 Ravi Mundoli / fullhyd.com
EDITOR RATING
1.0
Performances
Script
Music/Soundtrack
Visuals
NA
NA
NA
NA
Suggestions
Can watch again
NA
Good for kids
NA
Good for dates
NA
Wait to rent it
NA
The show begins with a number of absorbing advertisements, for such varied products as kitchen tiles, saris and gyms. Next up are a few trailers, including one of Mani Ratnam's Guru. Right before the interval, you get to see glimpses of two upcoming movies, Traffic Signal and Metro. Both have that gritty, smoky, big, bad city feel of the great Bombay films, and look promising.

During the interval, the velvet curtain in front of the screen comes down. It goes up again, and then you get to see some more slide advertisements. At the end, when you file out of the theater, strains of 36 China Town waft down from the speakers, and usher you out.

And, by the way, in the midst of all this thrilling action, if you're observing carefully, some movie called Kudiyon Ka Hai Zamaana (KKHZ) is played on screen.

Perhaps it isn't that boring, and we are too unkind. And since the movie reviewer's beholden duty is to review movies, here goes. The title KKHZ is ostensibly about how women are (or ought to be) on top in this day and age. Three friends - Mayuri (Rekha), Kanika (Kim Sharma) and Natasha (Vasundhara Das) - attempt to find a suitable boy for their unmarried pal Anjali (Mahima Choudhary). There is some urgency in the matter, because they've wagered that Anjali will be married before her 25th birthday.

Mayuri is the grand dame amongst them, having been married thrice earlier, and now into her fourth loveless innings. Kim is sweet and romantic, and newly married; Natasha is a mom-to-be; and Anjali, of course, is single and searching. Each friend duly finds a candidate.

Meanwhile, Anjali meets Amar Khanna (Ashmit Patel), in whom she appears to have finally found the man of her dreams. Amar owns a restaurant, is a singer, and appears to live in what looks remarkably like a furniture/décor/lifestyle showroom in Banjara Hills.

The first half of the movie passes by with very little of substance happening on the story front. During the interval, you sit and wonder, "How in the world are they going to introduce any complication in the plot?" The second half finally manages to make you sit up and take notice, but just for a few moments. To cut the short story even shorter, there is complication, there is conflict, there is resolution, and many of the customary ingredients of filmi masala.

All said and done, most of KKHZ is as interesting as watching paint dry. The only statement of significance that it makes, is that the romantic, married, doting-on-husband woman (Kanika), and the pregnant, mom-to-be (Natasha) are superior states of womanhood to be in than the thrice divorced socialite (Mayuri). So much for the kudiyaan and their zamaana.

Vasundhara Das and Kim Sharma have little to do for the most part, beyond making irritating conversation and squeaky noises. You can hardly believe that the actress who did Monsoon Wedding and Hey Ram agreed to this role. And (the horror, the horror!), for much of the movie, it appears as though Rekha's abilities too are squandered in a bad desi version of Sex And The City, complete with martinis during manicures and mimosas during makeup.

Thankfully, however, she does get to show a few glimpses of her raw acting power. A particularly poignant and memorable scene is in the second half when she is trying to put the passion back in her marriage. Husband and wife are sitting in front of a big fire. She is in a vivid red and black ensemble, and sings (in her own voice!) "Din dhal jaaye" from Guide. While Rekha won't be giving the divas a run for their money, she manages to pull of something almost special.

Don't see KKHZ in the multiplex, don't see it in the regular theater, don't buy the DVD, don't rent the VCD. It will show up on TV in a few months time, where you are Master of the Universe, and can always change the channel.
Share. Save. Connect.
Tweet
KUDIYON KA HAI ZAMAANA SNAPSHOT

ADVERTISEMENT
This page was tagged for
Mahima chaudhary ashmit patel movi name
kudiyon ka hai zamana movie full
kudiyon ka hai zamana full movie
Kudiyon Ka Hai Zamaana hindi movie
Kudiyon Ka Hai Zamaana reviews
Follow @fullhyderabad
Follow fullhyd.com on
About Hyderabad
The Hyderabad Community
Improve fullhyd.com
More
Our Other Local Guides
Our other sites
© Copyright 1999-2009 LRR Technologies (Hyderabad), Pvt Ltd. All rights reserved. fullhyd, fullhyderabad, Welcome To The Neighbourhood are trademarks of LRR Technologies (Hyderabad) Pvt Ltd. The textual, graphic, audio and audiovisual material in this site is protected by copyright law. You may not copy, distribute, or use this material except as necessary for your personal, non-commercial use. Any trademarks are the properties of their respective owners. More on Hyderabad, India. Jobs in Hyderabad.