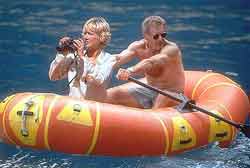 Feroz Hassan / fullhyd.com
EDITOR RATING
6.0
Performances
Script
Music/Soundtrack
Visuals
NA
NA
NA
NA
Suggestions
Can watch again
NA
Good for kids
NA
Good for dates
NA
Wait for OTT
NA
If you happen to be back early from work and are in the mood for half a movie, then there are any number of them that I could suggest that just fade out in the second half. But Six Days, Seven Nights would fit the bill perfectly. Not because the second half stinks, but because you wouldn't have missed anything by not watching it. It just doesn't warrant attention. The next morning you would still be able to guess what happened next, and be right. Yet, it doesn't dilute the satisfaction of having watched an entertaining movie.

Harrison Ford - even though he stars in the least challenging role of his life after Air Force One - has the much-needed charisma to carry off yet another perfunctory character for whom everything is right with the world. He thinks the same of his battered airplane too! And yes, he is a private pilot. When Anne Heche, the assistant editor of a glossy (they prefer to call it Dazzle), is on a holiday with her lover, David Schwimmer, it isn't exactly love at first sight.

But when she is called back to meet a deadline, she has to get back on his plane. A convenient storm later, the two end up on an island. The interesting part starts here as the two struggle to reconcile the fact that they are together and hate each other, and they have to find their way out. It is a little more funny than it sounds. Anyway, their task is not made easy by a few visits by pirates. They manage to come out, totally and irrepressibly in love. Did I mention that it was predictable? I think I did, and now you will believe me.

The setting surely made it a treat for the cinematographer, and it shows. Some breathtaking views of the valleys and the ocean are easy on the eyes, as is the movie on the mind. No one's gonna be hurt by watching Six Days..., nor is anyone going to be the wiser when it comes to cinema. Follow your instincts!
Share. Save. Connect.
Tweet
SIX DAYS SEVEN NIGHTS SNAPSHOT

ADVERTISEMENT
This page was tagged for
six days film
Six Days Seven Nights english movie
Six Days Seven Nights reviews
release date
Harrison Ford, Anne Heche
Follow @fullhyderabad
Follow fullhyd.com on
About Hyderabad
The Hyderabad Community
Improve fullhyd.com
More
Our Other Local Guides
Our other sites
© Copyright 1999-2009 LRR Technologies (Hyderabad), Pvt Ltd. All rights reserved. fullhyd, fullhyderabad, Welcome To The Neighbourhood are trademarks of LRR Technologies (Hyderabad) Pvt Ltd. The textual, graphic, audio and audiovisual material in this site is protected by copyright law. You may not copy, distribute, or use this material except as necessary for your personal, non-commercial use. Any trademarks are the properties of their respective owners. More on Hyderabad, India. Jobs in Hyderabad.