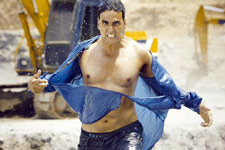 Neha Mathur / fullhyd.com
EDITOR RATING
4.0
Performances
Script
Music/Soundtrack
Visuals
4.0
2.0
5.0
6.0
Suggestions
Can watch again
No
Good for kids
No
Good for dates
No
Wait for OTT
Yes
Dare you ask how 'Boss' is, leave alone who he is? Just know that this strapping Haryanvi with pulled back Don Corleone hair and metal knuckles is always right. He is good, we are good, and the world is good. No, wait; hang on. We are still reeling under the effects of that last blow to our delicate skull (and no, we are not referring here to Anthony D'Souza's irrevocable dud Blue - let bygones be bygones).

In the real world where cinema halls can become dark domes of torture, the 'Boss' is a lethal weapon. He is invincible and he believes he is always right. Unfortunately, director Anthony D'Souza and scriptwriters Farhad-Sajid feel the same way about themselves, too. Lowbrow masala does not mean that anything goes. An audience demands entertainment not in spurts or doses. Also, a loud film does not necessarily translate into enjoyment.

The storyline is non-existent, but we will try our very best to rehash and lay it down for our readers. If D'Souza can attempt Mammootty's Pokkiri Raja, surely we can try our hand at D'Souza's 'Boss'.

Satyakant (Mithun Chakraborty), a Mahatma Gandhi lookalike, is an exemplary schoolteacher who shuns his elder son Surya (Akshay Kumar), a mere boy, for his purportedly violent ways. He then goes on to proclaim (in full filmi emotion) that his younger boy, Shiv (Shiv Pandit), is his only living son. The film then plays around with the good son/bad son syndrome.

Parallel to this world is the ancient land of the Mahabharata, Kurukshetra, where resides and presides transport don Big Boss (yes, there is lineage), fondly called Tauji (Danny Denzongpa). A benevolent gunda, he adopts and mentors Surya, and 20 minutes into the film (and 15 years later) arrives his prot?g?, Akshay-the-Boss, trucks in tow, fighting injustice on a contractual basis.

The film is built around the action sequences, which are the only exciting bits, what with Akshay Kumar making a sport out of fighting. He beats to pulp, delivering punches to the tune of music while cheerleaders in lehengas liven up the goings-on.

Akshay's comic timing is spot on, and while the humour is much like Akki's blows - in your face, fist-first - and the one-liners are coarser than an ape's hairy backside, it works. However, the forced melodrama does not. Nor do the periods of non-Akshay-ion.

The two heavyweights Mithun Chakraborty and Danny Denzongpa are no more than props, and are shamelessly underutilised. With little scope in the script, they can only do so much. Mithun Chakraborty's Satyakant ends up a caricature; so much so that you laugh out loud when he enacts a particularly emotional piece. Ronit Roy, however, manages a menacing self.

The effort to contrive a plot is miserably shoddy - or maybe there was no effort. The tacky writing takes away from the whole viewing experience. There are vast stretches where the film does not engage. The writers could have learnt a thing or two from the Rowdy Rathore makers.

The abrupt leaps from full-blown action to sentimentality, and then from a Jay-Z style hip-hop party to Mahabharata mythology, are unconvincing and insulting to the viewer. Yes, we did leave our cerebrum at home, but our desire to be adequately entertained walked in with us. Aditi Rao's sculpted body and the periodic spells of gyrating women might tease the pituitary, but that is not enough.

Boss celebrates a masculinist ideal where combat is king, and women are objects to be had or protected. Aditi Rao Hydari loses herself in this misogynistic landscape. Actually, the music videos in the film are there mainly to mostly objectify scantily-clad women and on occasion Akshay's beefed-up body.

The music is up-tempo and energetic. The rustic Hum Na Tode, an adaptation of Tamil song Aapde Pode and Honey Singh's Party All Night are all the rage.

So is this Boss or Toss? Only go for this one if you are a die-hard Akshay Kumar fan aaand you do not mind seeing how his sweat grows little saplings. Or you have insane amounts of money and time to spare (and have nothing better to spend it on).

Maybe we should have published this on a Saturday - in case the Boss is reading. It is his day off. Cue - another song with women in black leather.
Share. Save. Connect.
Tweet
BOSS (HINDI) SNAPSHOT 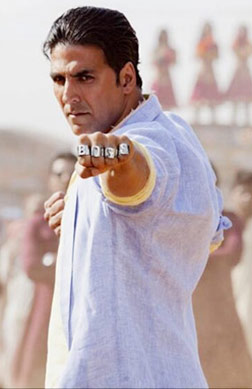 ADVERTISEMENT
This page was tagged for
mickey virus hindi movie
Boss (Hindi) hindi movie
Boss (Hindi) reviews
release date
Akshay Kumar, Ronit Roy
Follow @fullhyderabad
Follow fullhyd.com on
About Hyderabad
The Hyderabad Community
Improve fullhyd.com
More
Our Other Local Guides
Our other sites
© Copyright 1999-2009 LRR Technologies (Hyderabad), Pvt Ltd. All rights reserved. fullhyd, fullhyderabad, Welcome To The Neighbourhood are trademarks of LRR Technologies (Hyderabad) Pvt Ltd. The textual, graphic, audio and audiovisual material in this site is protected by copyright law. You may not copy, distribute, or use this material except as necessary for your personal, non-commercial use. Any trademarks are the properties of their respective owners. More on Hyderabad, India. Jobs in Hyderabad.