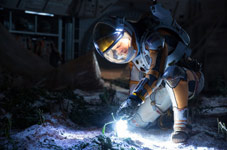 Zehra Abbas / fullhyd.com
EDITOR RATING
8.0
Performances
Script
Music/Soundtrack
Visuals
8.0
8.0
7.0
8.0
Suggestions
Can watch again
Yes
Good for kids
Yes
Good for dates
Yes
Wait for OTT
No
Conspiracy theorists on the Internet have raised questions about NASA's discovery of water on Mars, days before the release of Ridley Scott's The Martian. Whether there is an evil collusion between NASA and Scott or not, we can tell you this - The Martian doesn't require you to buy into any promotional publicity. Just buy a ticket, and let the film do the talking.

Based on the bestselling novel by Andy Weir, The Martian takes you straight to the Red Planet where Mark Watney (Matt Damon), a botanist on NASA's Ares III mission, is, hold on to your hats, collecting soil - no laser guns needed, just beakers please. A freak accident leaves Watney stranded alone on the planet for over a year, and this is the story of his struggle to survive.

More than a year, you ask? And the film is 2 hours and 22 minutes long? Fear not - Damon's effortlessly charming performance, Scott's masterful direction, and Drew Goddard's smart and funny screenplay will ensure that you won't feel, well, "spaced out" for even a minute.

Scott doesn't allow the heavy exposition to weigh down the film. Watney has to survive four years on Mars till the next Mars mission arrives, travel 3,200 kilometres to reach its landing site, and of course, not die due to suffocation, thirst, hunger or implosion. Watney's response? "F*ck you, Mars." His attitude can best be described as militant optimism - he performs surgery on himself, makes water, contacts Earth, and grows potatoes in his own poop.

Damon's act, undoubtedly one of his best, is chock full of charm and humour. Watch him strut around his potato patch, and declare, "In your face, Neil Armstrong." Later in the film, he christens himself a space pirate, and strides off purposefully - only to return because he's forgotten his helmet.

Through all of these endearing moments, as well as moments of despair and frustration, Damon does a phenomenal balancing act between vulnerability and spiritedness. Most significantly, he pitches Watney's humour at just the right note; one misstep into flippancy, and he would have lost the audience.

The protagonist's refusal to take himself seriously is also underlined by a running joke in the film - Watney's frustration at being stuck on Mars with nothing but a collection of disco music. He doesn't stare into the screen to the soaring notes and crashing cymbals of Hans Zimmer, but grimaces, and finally nods along to Donna Summer, Gloria Estefan, and Abba.

Director Ridley Scott imbues the entire film with this humorous "earthiness". He is no stranger to epic dimensions, but in The Martian, Scott has chosen to broaden his vision by narrowing the drama. The film is refreshingly free of melodramatic interpersonal dynamics, or narrow depictions of "good" and "bad" people. The director's presentation of myriad characters and situations conveys the reality of differing perspectives in a crisis situation, and even heroism, a significant leitmotif in most of his films, is rooted in the Everyman's refusal to give up.

Even the CGI is paradoxically "down-to-earth"; the focus is unapologetically on creating atmosphere and realism, and to the team's credit, you do feel like you've seen and experienced life on Mars through Watney's adventure. There's beauty - the pockmarked ochre barrenness of Mars, and it's behemoth mountain ranges twisted into alien shapes. There are also thrills - but these are reserved for the very end, and aren't as spectacular as the visuals of Gravity. But that's fine because in The Martian, the story is king.

The story unfolds in three distinct locations - Mars, Earth, and the spaceship Hermes - and your cinematic journey feels fluid and engaging throughout. A talented and diverse ensemble cast further bolsters this experience. Damon is your titular Martian, and he owns the film. But, Jessica Chastain and Michael Pena's performances give much needed warmth to the antiseptic interiors of Hermes, while Jeff Daniels, Sean Bean (watch out for the sneaky LOTR reference) and Chewitel Ejiofor butt heads at NASA, and create friction that ignites your interest in the Earth subplot.

Goddard's script has not just succeeded in creating an immensely likeable protagonist, but has transformed Weir's novel into a fast-paced and continuously suspenseful narrative. Watney's mentality is to look at a problem, find a solution, and do the same to any number of succeeding problems that arise. This trait, along with the accessible presentation of some serious science, allows the viewers to get involved not just emotionally but also intellectually in Watney's predicament.

The result? The Martian is one of the most entertaining sci-fi films in recent years. Of course, comparisons with other films in the genre are inevitable. Simply put, if Interstellar is the theory-obsessed professor, and Gravity is the artist in therapy, then The Martian is the science geek, who looks at a problem and repeats Watney's line, "I'm going to have to science the shit out of this."

Put your geek hat on, and watch The Martian this weekend.
Share. Save. Connect.
Tweet
THE MARTIAN (3D) SNAPSHOT 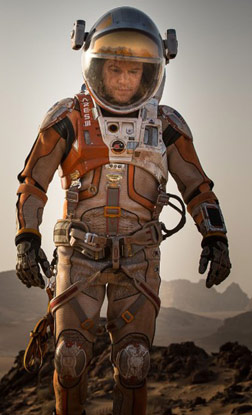 ADVERTISEMENT
This page was tagged for
The Martian (3D) english movie
The Martian (3D) reviews
release date
Matt Damon, Jeff Daniels
theatres list
Follow @fullhyderabad
Follow fullhyd.com on
About Hyderabad
The Hyderabad Community
Improve fullhyd.com
More
Our Other Local Guides
Our other sites
© Copyright 1999-2009 LRR Technologies (Hyderabad), Pvt Ltd. All rights reserved. fullhyd, fullhyderabad, Welcome To The Neighbourhood are trademarks of LRR Technologies (Hyderabad) Pvt Ltd. The textual, graphic, audio and audiovisual material in this site is protected by copyright law. You may not copy, distribute, or use this material except as necessary for your personal, non-commercial use. Any trademarks are the properties of their respective owners. More on Hyderabad, India. Jobs in Hyderabad.