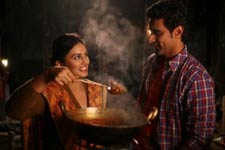 Nupur Barua / fullhyd.com
EDITOR RATING
6.0
Performances
Script
Music/Soundtrack
Visuals
7.0
5.0
7.0
6.0
Suggestions
Can watch again
Yes
Good for kids
No
Good for dates
Yes
Wait for OTT
No
For better or for worse, the Hindi film industry thrives on Punjabi culture. Add to that a small-town setting, and viola, you have enough viewers to fill theatre seats, at least for the first three days. With "independent" films becoming more acceptable to wider audiences, Luv Shuv Tey Chicken Khurana, while not exactly in the same league as Skyfall (also releasing this weekend), may just prove to be the light-hearted distraction that one needs after all the hectic celebrations of the last month.

Omi Khurana (Kunal Kapoor) stole his grandfather's (Vinod Nagpal) money and ran away to London to make his fortune. Needless to say, he did not do very well. At present, the drifting Omi is in debt, and a bald villain (Munish Makhija) gives him an ultimatum - pay back the pounds or forfeit any dreams of a citizenship in the UK.

So Omi goes home to Lalton, his hometown, in Punjab, to arrange for some money. His daarji is now senile and has Alzheimer's Disease, his paternal uncle (Rajendra Sethi) is suspicious of Omi's sudden return after a decade, his aunt (Seema Kaushal) is overjoyed, and his cousin Jeet (Rahul Bagga) is engaged to Omi's childhood sweetheart Harman (Huma Qureshi). Also living in the house now is a not-right-in-the-head Titu Mama (Rajesh Sharma), his aunt's brother.

Omi's original plan, to sweet-talk or con his grandfather into giving him some money from the highly successful dhaba that he owns, is now futile. The dhaba is in ruins, for one. Also missing is the recipe that made his grandfather famous - the Chicken Khurana - the one that used a secret ingredient and used to draw people from far and near. Omi's only solution to his money crunch is to somehow learn the secret ingredient and sell the recipe to the highest bidder.

As far as stories go, Luv Shuv Tey Chicken Khurana has all the right ingredients. It has, after all, the central theme of food (specifically chicken) running through it. Each character is a spice, or a garnish, and all their individual plots make for great presentation. The problem then lies in staging a cohesive screenplay and giving the audience a well-cooked plot. All the little jokes (well, almost all) and the eccentricities are effective elements, as are some of the smaller sub-plots.

But all of it, as a whole, is a mess, and can become quite confusing. The director meanders through the first half setting up situations and characters, and the pace picks up only after intermission.

Humour is the backbone of the movie, and some of the dialogues are definitely going to leave you in splits. The drawback, however, is the lack of conviction on the part of the lead actor to carry the film alone on his shoulders, despite the able support of the rest of the cast. Kunal Kapoor tries really hard, but he is, at the end of the day, a city boy, and he just does not have a grip on the nuances of a small-town character. To give him credit, however, he does not overact, and is as sincere as he can get.

Huma Qureshi as the doctor and ex-girlfriend has a meaty role. She is sober and earnest in her portrayal of a jilted lover who never got over her heartbreak. Rahul Bagga as the cousin with a secret is equally sincere, and is as vulnerable as he was hard as the cop in Powder. Dolly Ahluwalia's role is brief, but entertaining.

The star of the movie is Rajesh Sharma - he plays an obnoxious, ungrateful, delusional pile-on who hates his sister's cooking. He has the best lines in the movie. Munish Makhija, once famous as Uddham Singh, is effective, until he opens his mouth. His lackey is endearing, strangely.

With Amit Trivedi helming the music, you cannot go wrong with the soundtrack of a film, and this movie does not disappoint in the least. Of course, there is a strong Punjabi/bhangra influence in the songs, but there is also a lot of soul. The end-credits music video is a fun one, so you may want to sit through it. Production design and costumes are above-average, except in the London portions.

As mentioned earlier, Luv Shuv Tey Chicken Khurana may just be the distraction that you need before you dive into Diwali preparations. The older generation may be a little conservative when it comes to accepting these off-beat movies, but this particular film may just wipe out their apprehensions, and become a reason for bonding with the younger lot. It is, after all, the story of a not-so-prodigal son returning as a liar, his elders welcoming him with open arms and forgiveness, and the errant son finding redemption - just what we need in this country.
Share. Save. Connect.
Tweet
LUV SHUV TEY CHICKEN... SNAPSHOT
LUV SHUV TEY CHICKEN KHURANA SNAPSHOT 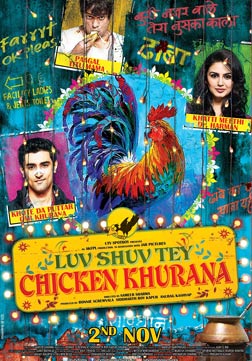 ADVERTISEMENT
This page was tagged for
Luv Shuv Tey Chicken Khurana hindi movie
Luv Shuv Tey Chicken Khurana reviews
release date
Kunal Kapoor, Huma Qureshi
theatres list
Follow @fullhyderabad
Follow fullhyd.com on
About Hyderabad
The Hyderabad Community
Improve fullhyd.com
More
Our Other Local Guides
Our other sites
© Copyright 1999-2009 LRR Technologies (Hyderabad), Pvt Ltd. All rights reserved. fullhyd, fullhyderabad, Welcome To The Neighbourhood are trademarks of LRR Technologies (Hyderabad) Pvt Ltd. The textual, graphic, audio and audiovisual material in this site is protected by copyright law. You may not copy, distribute, or use this material except as necessary for your personal, non-commercial use. Any trademarks are the properties of their respective owners. More on Hyderabad, India. Jobs in Hyderabad.