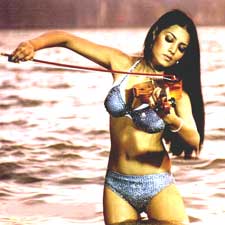 Jaanasheen is nothing but a vulgar display of power. That of intense scientific progress - push-up underwear, silicon and a fair hold on the chapter of Heights & Distances. Fardeen is an amateur bike racer. Blaming his dad for his mom's death, he lives in Australia with his aunt. His dad however needs him to become the heir for the empire, and so ends up in Australia himself.

Feroz Khan is a dreaded mafia boss having problems with Fardeen's dad. Eventually Feroz clips him. But Feroz somehow takes a liking to Fardeen. He reminds Feroz of his own son martyred in the Afghan war in '81. So now he wants Fardeen as an heir for his empire, too. Hence the name 'Jaanasheen', which surprisingly doesn't mean "more skin than Baywatch".

In the end, Fardeen comes to know that his father figure murdered his father. He's left speechless, not to mention utterly expressionless. But he somehow manages to deal with him permanently. Plenty of reels are wasted on the biking sequence. The makers never saw the X zone on ESPN.

And now for the moment you've all been waiting for. Just like in the movies, the best has been stored for the last, to let you stay on. Celina Jaitley! She's hot enough to make the Devil sweat. She has a bikini for every occasion: dancing in the pub - trendy purple bikini; running at the shore - comfy yellow bikini; brother dead, father murdered - sad black-and-white bikini. But don't jump to rash conclusions about her, her role demanded it. In real life she's different.

An underground film magazine read, "But contrary to the general belief, it seems Celina carries herself off very well. In the launch party of Jaanasheen in a five star hotel, she managed not to choke on anything, but couldn't figure out which utensils to use, and ended up trying to eat soup with a fish fork. Far better than Fardeen and Feroz, who were wasted enough to think Jaanasheen would make it big."

If there are any creatures that want to know what her role in the film was, please get a life. According to a poll conducted, six out of ten people interviewed said that they had experienced "admirable understanding" after looking at her; two out of ten admitted to heart attacks; and one in twenty said that it was better than any other dog food.

Feroz is known to be quite foxy. I bet he didn't have many headaches at all while making Jaanasheen. It used up all of 2 neurons of his brain. Jaanasheen throws light on the dark corners of the minds of rapists and the possible cause behind their attacks. To say the least, it was taxing to understand how the film passed the censor board. Did Celina's magic work on them too or were they rooting for Fardeen?
Share. Save. Connect.
Tweet
JANASHEEN SNAPSHOT

See Janasheen full details
JANASHEEN USER REVIEWS
1 - 3 OF 3 COMMENTS
POSITIVE  |  NEGATIVE |  NEWEST  |  OLDEST  |  MOST HELPFUL  |  LEAST HELPFUL
USER RATING
5.4
33 USERS
Performances
Script
Music/Soundtrack
Visuals
NA
NA
NA
NA
Can watch again - NA
Good for kids - NA
Good for dates - NA
Wait to rent it - NA
Sash Hawk on 28th Jan 2004, 12:05pm | Permalink
Although Celina's acting really leaves a lot to be desired, I don't think she has worn any less clothes than most of bollywood babes recently. I mean we had not seen her nipples as yet (a la Mandakini - RTGM, Zeenat Aman - SSS, Dimple Kabadia - Sagar), or the bra-hooking scene of Kareena Kapoor in K3G, or even the love-making sequences of Bips. I mean all models turned actresses have worn bikinis and exposed like hell recently, like Priyanka Chopra, Lara Dutta, Neha Dhupia, Riya Sen, the 3 dumb babes in Boom etc. The list is endless, so let's cut the hype over Celina's bikinis once and for all, pls!!
RATING
8
Saleem Khan on 8th Jan 2004, 8:56am | Permalink
the best movie
RATING
10
Ash Moh on 29th Nov 2003, 10:07pm | Permalink
I dont understand what the public wants to see?


I think Janasheen is a excellent movie with great performances from Fardeen, Celina and Feroz Khan and most of all it has superb music all the songs are great!

ADVERTISEMENT
This page was tagged for
Janasheen hindi movie
Janasheen reviews
release date
Fardeen Khan, Celina Jaitley
theatres list
Follow @fullhyderabad
Follow fullhyd.com on
About Hyderabad
The Hyderabad Community
Improve fullhyd.com
More
Our Other Local Guides
Our other sites
© Copyright 1999-2009 LRR Technologies (Hyderabad), Pvt Ltd. All rights reserved. fullhyd, fullhyderabad, Welcome To The Neighbourhood are trademarks of LRR Technologies (Hyderabad) Pvt Ltd. The textual, graphic, audio and audiovisual material in this site is protected by copyright law. You may not copy, distribute, or use this material except as necessary for your personal, non-commercial use. Any trademarks are the properties of their respective owners. More on Hyderabad, India. Jobs in Hyderabad.