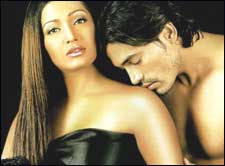 Deepa Menon / fullhyd.com
EDITOR RATING
1.0
Performances
Script
Music/Soundtrack
Visuals
NA
NA
NA
NA
Suggestions
Can watch again
NA
Good for kids
NA
Good for dates
NA
Wait for OTT
NA
Hawas earned the label of semi-porn even before it was released. Don't be taken in by that. There's nothing pornographic about Hawas, although it does show a lot of skin. But skin does not equal sex. If that were the case, sumo wrestlers would be the hottest beings on earth.

But we'll say this for Meghna - she does show a lot of promise as a Bollywood heroine; her face seems to be completely unaware of what the rest of her is up to. Every one of her dresses has ample scope for cleavage, and she lets out little shrieks of distress at little or no provocation. In some scenes she even looks eerily like Bipasha Basu, only minus the subtlety.

Meghna lives with her husband Shawar in Dubai. She's your typical bored housewife, whose her husband won't let her work. She hangs out at malls all day, and when she's really bored, goes home with random men on the road. Of course, when we say random, we don't mean completely random - they do have to be above-average lecherous.

Tarun is one such lech who takes her home and shows her his paintings of naked women. She is thoroughly shocked and disgusted, but in a good way. So they meet again, and this time he gives her the grand tour of his apartment till they end up in his bedroom. Honestly, we didn't see that coming. Meghna didn't either, and she's very surprised when she learns that this man wishes to have sex with her. But she doesn't want to embarrass him or anything, so she goes along with it.

Since her husband is a clueless workaholic, Meghna doesn't get caught romping on the side. She does feel very guilty, though, and no matter what she's doing, whether it's being painted in the nude or fooling around in a public washroom, in her heart she's very sad and disturbed. You would be, too, if Hawas was your debut film.

Eventually Shawar catches on, and he sets a private detective on his wife. The detective produces incriminating photographs, but the man is still not satisfied - he wants to catch the lovers red-handed. He's quite a pervert, our man Shawar. But he gets to the spot a little too late and has to contend with just killing his wife's lover. This is when things start to get really mind-numbing, where earlier they were simply boring.

The police - with ridiculous Arabic accents - are on the trail of the killer, but fail completely to nab him, thereby making apan ka Pandu hawaldar look like Sherlock Holmes in comparison. With that the movie ends. And no, there is no lesbian action anywhere in it. Turns out that was just a rumour the producers spread around to get people in the theater. God knows they could use all the help they can get.
Share. Save. Connect.
Tweet
HAWAS SNAPSHOT

ADVERTISEMENT
This page was tagged for
old marathi movies pandu hawaldar at 5
the unfaithful hawas movie
telugu movies the unfaithful hawas
Hawas another remake mivie
HAWAShindimovie
Follow @fullhyderabad
Follow fullhyd.com on
About Hyderabad
The Hyderabad Community
Improve fullhyd.com
More
Our Other Local Guides
Our other sites
© Copyright 1999-2009 LRR Technologies (Hyderabad), Pvt Ltd. All rights reserved. fullhyd, fullhyderabad, Welcome To The Neighbourhood are trademarks of LRR Technologies (Hyderabad) Pvt Ltd. The textual, graphic, audio and audiovisual material in this site is protected by copyright law. You may not copy, distribute, or use this material except as necessary for your personal, non-commercial use. Any trademarks are the properties of their respective owners. More on Hyderabad, India. Jobs in Hyderabad.