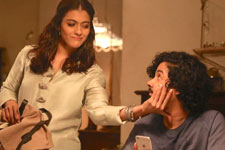 Sonali Dabade / fullhyd.com
EDITOR RATING
3.0
Performances
Script
Music/Soundtrack
Visuals
5.0
4.0
3.0
6.5
Suggestions
Can watch again
No
Good for kids
Yes
Good for dates
No
Wait to rent it
No
If there is one actress in Hindi cinema who can bear the weight of a heavy role, it has to be Kajol. Being critically acclaimed while also maintaining a bubbling persona isn't easy, but she has done it across the years, and with much élan. Then why in the second innings of her career has her acting come to such hamming? Watching her in Helicopter Eela as an overbearing mother is a little painful in a number of ways.

Based on a Gujarati play by Anand Gandhi named Beta, Kaagdo, Helicopter Eela is the story of Eela Raiturkar (Kajol), a singer of high talent and calibre. She only has to get that one break. As she waits for one, she marries Arun (Tota Roy Chowdhury), her boyfriend, and they have a son, Vivaan (Riddhi Sen) - and life quickly supersedes aspirations.

Things happen that lead to Eela becoming a single mother to Vivaan, and she is worried about him every second of the day - the quintessential helicopter parent. She is so dedicated that Vivaan has to intervene. When he tells her to do something for herself and not just for him, she decides to join Vivaan's college as a student. What follows describes Eela's overenthusiasm as much as it reflects Vivaan's consternation at his mother following him around.

The spirit of Helicopter Eela is wonderful - a single mother trying to do the right thing for her son and for herself, a son trying to convince his mother to give herself more credit, and a story about rediscovering a lost passion - but is unfortunately the movie's only redeeming quality, because of how flawed the execution is. For example, the father suddenly decides that he needs to live his life and enjoy himself because he thinks - based on an offhand remark, a statistic - that he will die before he hits 40, and leaves the wife and child. Then, while overbearing mothers are everywhere, Eela is on a different level altogether.

Also, while the film tries hard to show how the relationship between a mother and a son is understanding and forgiving despite how bad a situation can get, it tries too hard, to say the least. The overt attempts of the actors to convince the viewers that it's okay to be like those characters fall flat on their faces. Despite what the script is trying to convince you of, on the whole, as we said, there is no clarity in the execution. The screenplay is fragmented, and in many places, confuses you to the point of annoyance. Also, while the first 10 minutes of the film set a good tone, the movie going back to 1994 to trace Eela's background is a little cringe-worthy.

When you see Kajol's name associated with a movie, you expect it to have some value, at least in the acting department. But Helicopter Eela is 2 hours and 9 minutes of painfully watching Kajol do over-the-top facial and emotional maneuvers that make you wish you had walked out. Just like the couple who came in after you and left just 5 minutes later. Kajol in this film comes across as trying to be as cute as Anjali in Kabhi Khushi Kabhi Gham, but ends up becoming Pooja. And that is absolutely heartbreaking to watch.

Riddhi Sen however does good as the sometimes-frustrated, most-times-understanding teenage son, overshadowing Kajol. You sympathize with Vivaan because the teenage is when you crave for privacy the most and crave to emerge from the wings of your parents' love. And Sen portrays this well, even if his performance isn't groundbreaking. He lightly justifies the National Award for Best Actor he received for his performance in the Bengali film Nagarkirtan.

There's also Neha Dhupia as a strict college arts teacher whose dream is to get her college to win a theatre competition. Her role is limited, but she's good at it. Her real-life eclectic dressing style fits perfectly here.

Zakir Hussain makes an appearance as the frazzled principal of the college. There are also a few cameos from Bollywood celebrities like Mahesh Bhatt, Ila Arun, Shaan and Baba Sehgal. When Ila Arun meets Eela and Arun at the launch party of MTV India, she makes a predictable joke. If the film was well-made and the acting better, the joke would have been a hit. In this movie, it only invites a few cringes.

Amit Trivedi and Raghav Sachar disappoint greatly in the music department. There are one or two hummable melodies, but other than that, it is mostly wannabe '90s music. Trying to bring back '90s music isn't bad, but execution like this is disappointing. Plus, Kajol trying to lip-sync and looking completely out of sync is a little jarring to watch.

All in all, if you're going to watch this movie, walk in with as few expectations as possible and be prepared for some OTT acting. There was a much better movie possible here, but it's too late to think about that now.
Share. Save. Connect.
Tweet
HELICOPTER EELA SNAPSHOT 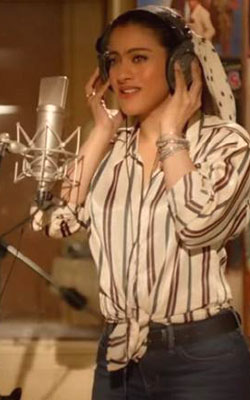 ADVERTISEMENT
This page was tagged for
Helicopter Eela hindi movie
Helicopter Eela reviews
release date
Kajol, Riddhi Sen
theatres list
Follow @fullhyderabad
Follow fullhyd.com on
About Hyderabad
The Hyderabad Community
Improve fullhyd.com
More
Our Other Local Guides
Our other sites
© Copyright 1999-2009 LRR Technologies (Hyderabad), Pvt Ltd. All rights reserved. fullhyd, fullhyderabad, Welcome To The Neighbourhood are trademarks of LRR Technologies (Hyderabad) Pvt Ltd. The textual, graphic, audio and audiovisual material in this site is protected by copyright law. You may not copy, distribute, or use this material except as necessary for your personal, non-commercial use. Any trademarks are the properties of their respective owners. More on Hyderabad, India. Jobs in Hyderabad.