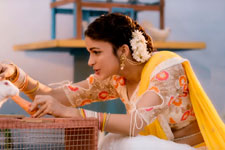 Swaroop Thotada / fullhyd.com
EDITOR RATING
5.0
Performances
Script
Music/Soundtrack
Visuals
6.0
3.0
6.0
6.0
Suggestions
Can watch again
No
Good for kids
Yes
Good for dates
Yes
Wait to rent it
Yes
The metamorphosis of an actor into a star makes for quite an intriguing observation. At some point in their careers these guys decide they don't have to be the underdog hero anymore and that it was time they proved they didn't need a plot and could pull off entertainers with just their antics and charisma.

Sharwanand seems to think that now is his time, but we struggle to see his point. While the audacity is appreciable, the fact that Sharwanand's numerous slow-motion walks don't draw any hoots from the audiences should remind his directors that his idiosyncrasies are not yet an alternative to well-written scenes. It isn't meekness but pragmatism that Nani hasn't leapt into a full-blown mass avatar yet despite his long string of successes.

An implausible plot is just the recipe for a masala potboiler, but if the flimsiness is laid bare all through, only the leading man is to blame, and all fingers point to Sharwanand. It doesn't mean there is a problem with his acting. But it's not "acting" that is in demand here: it's charisma, charm and mass appeal. Of course, Sharwanand's character is not the typical muscle-flexing and masculinity-oozing tough cop. His Radha Krishna wields a baton and pistol, but seldom uses them. He rather resorts to a play of wits, just like his namesake deity.

Though it seems like an apt choice on paper, Sharwanand plays Radha as a rhapsodic and caffeinated manchild, whose consistent smile looks like it might slice his cheeks if he went any wider. It might have made for an interesting contrast (like how Ravi Teja's character stood out among saner characters in Kick) had it been placed in a rugged world, but it's all sunshine around him for most of the film, and that robs the character of any dramatic endeavors. So we are doomed to watch how this constantly ecstatic heartthrob woos chicks and constables in a similar fashion for the entire first hour.

So Radha, a commoner, is appointed an SI by a DGP who is too impressed with how he helped the police catch some criminals. He is posted to a remote village in Warangal where the crime rate is nil, and it bores him. He bugs his higher officials until they transfer him to a place where crime is in endless supply - Hyderabad, that is. Meanwhile he makes use of his spare time to pitch preposterous ideas to woo a girl in the village (Lavanya Tripathi), and she eventually falls for him, perhaps fearing an onslaught of increasingly bizarre schemes emanating from his persistent creativity. Euclid will turn in his grave if any of these characters are called two-dimensional.

Meanwhile a political unrest is cooked up between a sitting home minister (Ashish Vidyarthi) and a CM aspirant (Ravi Kishan), and twelve policemen get killed in a bomb blast. This moves Radha and the story, but the movement is in the order of millimeters, and at the speed of an overweight snail. For, nothing much happens in the movie that is engaging or entertaining. To fill up this creative vacuum, the director brings a second heroine (Aksha), and we get the mandatory duet where the two girls are pitted against each other in a war of skimpy costumes, to get the man.

Isn't that the ultimate male fantasy? Having gorgeous women get into a catfight for you? In a sense all our mass films are glorified male fantasies, aren't they? Puri's heroes get away with slapping their women and meting out the vilest of treatments and still being adored by them, Trivikram writes PK as a man so powerful that he can just buy off a busy railway station just so he can have a small chat with his family, and Balakrishna is still the most eligible bachelor despite his dissenting face. We can either complain that our films are getting increasingly ridiculous, or we can just take them as interesting case studies to see why they are succeeding. And it all comes down to one axiom: entertainment overrides plausibility. Had Sharwanand's act or the director's script been a notch higher than the fatuous affairs they are here, we wouldn't have gotten time for these reflections.

Lavanya Tripathi can act, but the script here doesn't want her to. So she just does what female leads do in our films - play with rabbits and dutifully burst into songs when required. Ravi Kishan hyperventilates, Saptagiri overacts, and the rest of the cast including Kota, Shakalaka Shankar and Brahmaji just do fine.

The songs are unremarkable. But the background score stays vigilant and ups the decibels at the slightest provocation. It must have been a very easy job for Radhan: switch to rock guitars whenever Sharwa walks in slow motion, else stick to mediocre. The cinematography lends to colour explosions on the screen, not unlike the rest of our films.

Radha reminds you of a number of films like Gabbar Singh, Race Gurram and Sharwa's own Run Raja Run, but not in a good way. Every scene, dialogue and shot feels derivative. And the fact that the film shoehorns in every last cliché doesn't help. It must be frustrating for talented actors like Kota and Bharani to do the same act again and again in every other film. It certainly is for you, at least, to see their calibre wasted like that.
Share. Save. Connect.
Tweet
RADHA SNAPSHOT 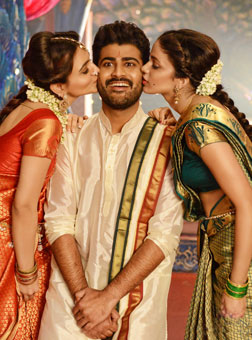 Could their reasoning be that a "foreign" face is more threatening than a familiar one? Naginnedu, Subba Raju and Supreeth started off as villains, but they ended up as character artists not long after their second or third films. And our directors are in constant search of "fresh" villains. Curiously, this logic didn't hold in the 80s and 90s when Rao Gopal Rao and the like had careers spanning decades. I haven't watched many films of that era. If you have, can you please throw some light on why and how that was possible?
And yes, I agree that most of the imported villains are awful. It seems once they get a call from our studios, they are browsing the current Telugu films and using them as prep material and that might be leading them to think over-acting is the norm here.
JayZ on 15th May 2017, 9:04pm | Permalink
Ram Gopal Varma used established actors like Paresh Rawal as villians in his very good movies.But they were established and great....the recent ones are horrible.
Swaroop Thotada on 16th May 2017, 10:25am | Permalink
Now when I think about it, we tend to laugh as soon as Brahmanandam makes an appearance on the screen, even before he cracks any joke. Our mind is conditioned to laugh at Brahmanandam and is already responding in anticipation of humor. The same might have applied to the Rao Gopal Rao era. People figured out he was a villain as soon as he made an entry, and all his previous films' bad deeds unconsciously conditioned people to perceive him as such.
Yes RGV has a unique way of bringing out a different side in actors. Who has that kind of keen vision these days?
Hari on 13th May 2017, 4:42pm | Permalink
>>>
Euclid will turn in his grave if any of these characters are called two-dimensional.
>>>

LOL. Had a good laugh early morning. Thanks Swaroop !!!

ADVERTISEMENT
This page was tagged for
movie review fullyhyd skimpy
telugu radha movies
tollywood catfight
Radha telugu movie
Radha reviews
Follow @fullhyderabad
Follow fullhyd.com on
About Hyderabad
The Hyderabad Community
Improve fullhyd.com
More
Our Other Local Guides
Our other sites
© Copyright 1999-2009 LRR Technologies (Hyderabad), Pvt Ltd. All rights reserved. fullhyd, fullhyderabad, Welcome To The Neighbourhood are trademarks of LRR Technologies (Hyderabad) Pvt Ltd. The textual, graphic, audio and audiovisual material in this site is protected by copyright law. You may not copy, distribute, or use this material except as necessary for your personal, non-commercial use. Any trademarks are the properties of their respective owners. More on Hyderabad, India. Jobs in Hyderabad.