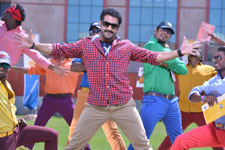 Ravi Kandala / fullhyd.com
EDITOR RATING
4.0
Performances
Script
Music/Soundtrack
Visuals
7.0
2.0
3.0
5.0
Suggestions
Can watch again
No
Good for kids
No
Good for dates
No
Wait to rent it
Yes
We could've simply listed out the cast of Rabhasa and filled up this entire page. It would've also been the definitive guide for casting directors just finding their way in Tollywood.

Unfortunately, all the money cannot fill up the movie with sense. Everything that Srinu Vaitla gets dangerously close to getting wrong with too many characters, Santosh Srinivas actually does. The result is a nightmare on screen and a case study in a script meltdown.

Due to a small misunderstanding, Karthik ends up mistaking Bhagyam (Praneeta), Chitti's friend, for Chitti, and proceeds to woo her. By the time three-fourths of the (no, not movie) first half is up, he realizes his mistake and returns to wooing Chitti.

Chitti's father Dayanand (Sayaji Shinde) sends his goons, and Karthik breaks all their bones without breaking a sweat. Dayanand then approaches another group of goons lead by Ajay to beat up NTR. You learn here that Ajay and his band of goons have also been searching for NTR. And after this, you lose track of the movie. Because right at this moment, around a thousand characters enter it.

Director Santosh Srinivas writes a story which is a mash up of his first film Kandireega and every other hit / semi-hit that was released in the last 5 years, and the result is a complete mess. Neither the comedy nor the emotions hit home. The film plays out exactly like Kandireega, minus the fun.

Rabhasa's biggest flaw is its deterioration into a tiresome sequence of fights, all of them involving NTR beating up a thousand goons. The fun part is that all these goons have more bounce than the rubber balls kids play cricket with. When any of them is thrown on the ground, he bounces back, flips over mid-air, and falls down again.

NTR does the same thing he's done in 99% of his movies so far. So do Samantha, Praneetha, JP, Ajay, Sayaji Shinde, Raghu Babu, Nagineedu, Satya Krishnan, Seeta, Surekha Vani, Nasser, Jayasudha, Brahmanandam and all other known names in the movie. So does Thaman, churning out the same kind of music he's churned out in over 50 films so far. So does the action director and so does the choreographer. And so does the producer - so much money is lavished on each frame, it makes you cringe.

If you still wish to see Rabhasa, then you will perhaps blend in perfectly with those screaming "Jai NTR, Jai Jai NTR" in the theatre this morning. But if you are not an NTR fan (and maybe even if you are), allow us to warn you off - Rabhasa is brilliantly boring and roaringly routine.
Share. Save. Connect.
Tweet
RABHASA SNAPSHOT 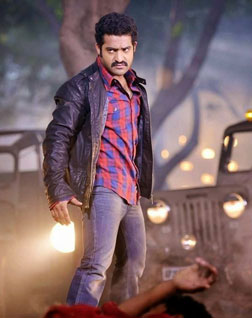 See Rabhasa full details
RABHASA USER REVIEWS
1 - 4 OF 4 COMMENTS
POSITIVE  |  NEGATIVE |  NEWEST  |  OLDEST  |  MOST HELPFUL  |  LEAST HELPFUL
USER RATING
5.0
2 USERS
Performances
Script
Music/Soundtrack
Visuals
NA
NA
NA
NA
Can watch again - NA
Good for kids - NA
Good for dates - NA
Wait to rent it - NA
ihatetollywood on 25th Sep 2014, 7:54pm | Permalink
Why does TOLLYwood promote consanguinous marriages when clearly its very bad for the offspring? Every high profile movie does this....people who doesnt know about this risk watch these movies and think its safe
adithya on 23rd Sep 2014, 8:11am | Permalink
A simple story with confusing elements. NTR does his job bearably again in a poorly scripted film. NTR wants to fulfill his mother's wish, which is that he get married to his sister-in-law. But he gets into a risky situation when he tries to help a stranger who makes a phone call to him. The stranger who makes the call falls in love with him due to the help he does. Despite this, there is nothing in first half. Pranitha's character only extends the story, and is totally unnecessary.

ADVERTISEMENT
This page was tagged for
Rabhasa telugu movie
Rabhasa reviews
release date
NTR Jr, Samantha
theatres list
Follow @fullhyderabad
Follow fullhyd.com on
About Hyderabad
The Hyderabad Community
Improve fullhyd.com
More
Our Other Local Guides
Our other sites
© Copyright 1999-2009 LRR Technologies (Hyderabad), Pvt Ltd. All rights reserved. fullhyd, fullhyderabad, Welcome To The Neighbourhood are trademarks of LRR Technologies (Hyderabad) Pvt Ltd. The textual, graphic, audio and audiovisual material in this site is protected by copyright law. You may not copy, distribute, or use this material except as necessary for your personal, non-commercial use. Any trademarks are the properties of their respective owners. More on Hyderabad, India. Jobs in Hyderabad.