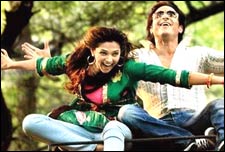 Deepa Garimella / fullhyd.com
EDITOR RATING
6.0
Performances
Script
Music/Soundtrack
Visuals
8.0
6.0
7.5
8.0
Suggestions
Can watch again
No
Good for kids
No
Good for dates
Yes
Wait for OTT
No
Love Aaj Kal tries to compare two generations in their approach to love - while the younger one puts personal convenience over love, the older one thought love was personal convenience. It, however, is strange that Bollywood pushes the envelope on a theme it usually is wisely cautious about - a theme that involves its (separated) protagonists trying to come to terms with feelings they can't immediately recognize. The film, then, turns out to be an endorsement of a kind of relationship culture that lets you very, very dangerously indefinitely, delay answering that question regarding who 'the right person' is.

The film opens with Jai (Saif Ali Khan) hitting on Meera (Deepika Padukone) at a nightclub. It is after a few months that they officially declare themselves a couple, and even then, the words 'girlfriend' and 'boyfriend' make them giggle. This, when they've been smooching all over the place right from the evening they met.

Then, because their careers are taking them to different countries, they decide to break up - the break-up's so ideal and so amicable that they throw a party to make it official. Neither seems to care that much about the long-term repurcussions of this split, until a little later, when each moves on because he or she thinks the other has moved on. Of course you know they're bluffing to themselves, since this is a whole movie made on the fact.

We are then led to believe that this whole 'moving on' business is a farce, because they can't stop texting each other about what's going on in their respective lives - not even when they're on dates with their partners. There's more that follows in the name of true love - some extra-coziness between the couple (that unambiguously crosses borders of infidelity), confusion over a wedding, and some realizations arrived at a little too late.

Ironically, the person who's leading Jai through all the confusion is Veer Singh (Rishi Kapoor), a sardar who raves about old-world love and how everyone was better off in the days when there were few options, and when people had the substance to travel a 1,000 miles to see the ones they loved. His parallel track involves Saif playing a younger Veer Singh.

The narrative alternates between the two romances, and if not for Veer Singh's romance, Love Aaj Kal is no feel-good story - Jai and Meera are not together for a long time, and they're anyway confused when they are. The older romance has so much more soul, and contributes to most of the film's essence.

When the snazzy and chic flirting between Jai and Meera is thrown at you at first, it actually is quite superficial, but you play along, assuming there's something solidly emotional to look forward to later. Saif then makes the first half lovable, peppering it with his usual brand of spontaneous humour. In the second half, there's way too much aimlessness in the way the emotions are handled.

Quite frankly, this film belongs to Saif and Rishi Kapoor. They are their usual brilliant selves. Rishi Kapoor is on a high with this second innings of his, and his characters keep getting interesting.

Saif is almost wasted in a role that requires him to make huge rambling monologues that by themselves aren't memorable pools of wisdom or brightness, but are interesting only because it's Saif. There's an irresistibly cute line about 'aam junta' being 'mango people', but many of the rest of his jokes are mischievous innuendos.

Deepika Padukone's role requires her to say a few smart lines, and a couple of emotional scenes with reddened eyes. The rest of it she gets by by looking amused at the proceedings. Her staid look, however, can pass off as an extremely 'dignified' performance.

Love Aaj Kal is presented with all the jazz of a big-budget Bollywood romance, being set on locations abroad, and in ritzy interiors. The retro flashback thankfully doesn't focus on stereotypes of dress and settings - it's just a dull sepia tint that makes it different from the present.

Pritam's music ranges from a soulful ballad to peppy Bhangra numbers, and the choereography heavily reminds you of Jab We Met.

Watch it, but it's by no means the best you can get from the man who made Jab We Met and Socha Na Tha. Or from the man who we loved to bits in Dil Chahta Hai and Kal Ho Na Ho.
Share. Save. Connect.
Tweet
LOVE AAJ KAL SNAPSHOT

ADVERTISEMENT
This page was tagged for
love aaj kal hindi movie#ip=1
Love Aaj Kal hindi movie
Love Aaj Kal reviews
release date
Saif Ali Khan, Deepika Padukone
Follow @fullhyderabad
Follow fullhyd.com on
About Hyderabad
The Hyderabad Community
Improve fullhyd.com
More
Our Other Local Guides
Our other sites
© Copyright 1999-2009 LRR Technologies (Hyderabad), Pvt Ltd. All rights reserved. fullhyd, fullhyderabad, Welcome To The Neighbourhood are trademarks of LRR Technologies (Hyderabad) Pvt Ltd. The textual, graphic, audio and audiovisual material in this site is protected by copyright law. You may not copy, distribute, or use this material except as necessary for your personal, non-commercial use. Any trademarks are the properties of their respective owners. More on Hyderabad, India. Jobs in Hyderabad.