Night At The Museum 2 Review 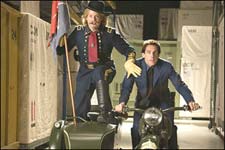 Samrat Sharma / fullhyd.com
EDITOR RATING
4.5
Performances
Script
Music/Soundtrack
Visuals
6.5
1.5
7.0
6.0
Suggestions
Can watch again
No
Good for kids
No
Good for dates
No
Wait to rent it
Yes
It would have been easier if Battle Of The Smithsonian did not have a single shred of humour or charm, because then writing it off would have been easier. With a few decent actors pulling off some good jokes and some easy laughs that pay off early, as well as Amy Adams doing what she does best - charm the film to a better quality - it is harder to say that the film is utter trash.

All the rest of it, though - the rote screenplay, the terrible humour, the bad acting and the completely vapid characterization - is as bad as you think it is. This is the kind of movie that almost makes you think of the prequel fondly. Almost.

Getting a large and talented cast to play historical characters in a franchise that made money the first time around would not have been too taxing, so I don't really know where Shawn Levy spent his energy, because it sure as spit ain't on the screen. His framing is boring, and his sense of narrative non-existent, and his actors have no energy to speak of.

The leads being the worst offenders - Ben Stiller reprises his role as Larry, no longer a night watchman, but missing his friends nonetheless. When he finds out that they are being shipped to the Smithsonian museum in Washington D. C., he heads there, and with the unwitting aid of Jonah Hill, the 'new guy', he tries to stop Egyptian king Kahmunrah (Hank Azaria) from rising up and ruling the world with the help of some dastardly villains of the past.

The whole cast he meets here - Azaria, Hill, Williams - they are all terrible, and hamming it up like this wasn't their day job either. Bill Hader gets a few laughs, and Owen Wilson is still good, but barring that almost all of the cast is a downer.

With the exception of Ms. Adams, of course. She is bright, energetic, funny, and just that right level of sexy that brings her Amelia Earhart to life. This is no biopic (that we shall leave to Mira Nair), but her Amelia is a nice enough character even being a caricature that she must portray for such a CGI-heavy film.

ADVERTISEMENT
This page was tagged for
Night At The Museum 2 english movie
Night At The Museum 2 reviews
release date
Ben Stiller, Amy Adams
theatres list
Follow @fullhyderabad
Follow fullhyd.com on
About Hyderabad
The Hyderabad Community
Improve fullhyd.com
More
Our Other Local Guides
Our other sites
© Copyright 1999-2009 LRR Technologies (Hyderabad), Pvt Ltd. All rights reserved. fullhyd, fullhyderabad, Welcome To The Neighbourhood are trademarks of LRR Technologies (Hyderabad) Pvt Ltd. The textual, graphic, audio and audiovisual material in this site is protected by copyright law. You may not copy, distribute, or use this material except as necessary for your personal, non-commercial use. Any trademarks are the properties of their respective owners. More on Hyderabad, India. Jobs in Hyderabad.