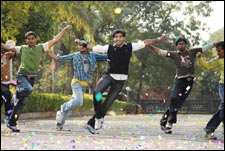 Deepa Garimella / fullhyd.com
EDITOR RATING
2.0
Performances
Script
Music/Soundtrack
Visuals
2.0
2.0
5.5
6.5
Suggestions
Can watch again
No
Good for kids
No
Good for dates
No
Wait to rent it
No
Jayanth (Jayanth) is a young man who sketches portraits of women and even flirts with them - the women, not the portraits, though going by his acting skills, not even the portraits will want to listen to him.

He then comes across a girl, Nazma (Prerana), in a white chudidar in the rain, and completely flips for her. She puts the chill on him, but he doesn't take the hint, citing excuses of love, beauty, rising fuel prices and global warming. Ultimately, it's none of these excuses that works - Nazma thinks of how much longer the film will continue if she doesn't agree to get along with him, and realizes that global warming is nothing.

Meanwhile, some terrorists are blasting bombs all over Hyderabad. And Jayanth's sketching skills are being used by the police to identify the perpetrators. The scriptwriter now decides enough is enough - of logic. He doesn't think logic will save the world from any of its problems, or from the fact that this movie anyway has one more hour to go. So he makes Jayanth draw a sketch of Nazma and realize to his (Jayanth's) shock that she's the actual terrorist - with no explanation to back anything you see on screen.

After the interval, we come to know that Nazma's from Pakistan indeed, but she's no villain - it so happened that the producers tricked her in, telling her this film is a 'youth statement'. Also, a terrorist called Azam Khan tricked her into carrying a bomb. After this, the couple is on the run from the police, and things build up to an unforgivable climax when Azam Khan takes a hospital hostage and calls it a 'hijack'.

The police, of course, don't forgive this - taking a hospital hostage is clearly not a 'hijack'. A hijack is what happens when you buy a ticket for a movie and this is what turns out.

This is a family production for the hero, and the least a decent family can do for their son is to hire a stylist. Jayanth has the build, but needs to work on his expressions, on his diction, and on getting a new family. Prerana looks pretty, and they've made her resemble Preity Zinta in many scenes. She still needs to take acting classes.

Jayanth, in the film, is surrounded by a bunch of enthusiastic side-kicks, including Chitram Sreenu, and they're a decent set of actors. Rao Ramesh tries to make up for the mediocrity in the film by some unrestrained overacting that reminds you of Prakash Raj's tendency to do the same.

The camera work is much above average, with a few truly impressive shots here and there. The music is also allright, but since no one knows about this film, the songs aren't going to enter public domain in any noticeable way.

Well, we bet you didn't know a film like this existed before you read this review. It was surely better that way.
Share. Save. Connect.
Tweet
JALLU SNAPSHOT

ADVERTISEMENT
This page was tagged for
jallu movie
jallu telugu movie
Jallu telugu movie
Jallu reviews
release date
Follow @fullhyderabad
Follow fullhyd.com on
About Hyderabad
The Hyderabad Community
Improve fullhyd.com
More
Our Other Local Guides
Our other sites
© Copyright 1999-2009 LRR Technologies (Hyderabad), Pvt Ltd. All rights reserved. fullhyd, fullhyderabad, Welcome To The Neighbourhood are trademarks of LRR Technologies (Hyderabad) Pvt Ltd. The textual, graphic, audio and audiovisual material in this site is protected by copyright law. You may not copy, distribute, or use this material except as necessary for your personal, non-commercial use. Any trademarks are the properties of their respective owners. More on Hyderabad, India. Jobs in Hyderabad.