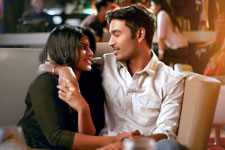 EDITOR RATING
2.0
Performances
Script
Music/Soundtrack
Visuals
6.5
1.5
4.0
7.0
Suggestions
Can watch again
No
Good for kids
No
Good for dates
No
Wait to rent it
No
For most men, it's okay if the lip movement of a woman they're talking to is not matching what she is saying, if she is showing a healthy cleavage. And this is the sole premise on which Thoota has been released. Dubbed from Tamil and looking every bit of it, the movie makes no bones about the fact that its USP for Telugu audiences is Priyamani's bosom, as anyone who's seen the newspaper ads will tell you (the hero does not even feature in them, and this is a proper hero-oriented movie).

Simhachalam (Jeevan), a gangster better known as Thoota (Telugu for bullet), makes money killing and maiming people as a hired assasin/goon. Sometimes he feels that what he's doing is bad, but then he looks at his paycheque and decides that nobody as expensive as him can be bad.

One day he is hired to throw acid on the face of Sravani (Priyamani), but he stops when he realizes that she's quite poor. He slowly falls in love with her - or at least he decides that whatever he feels when she wears super-skimpy clothes and clings to him in the songs, must be love. Like we at fullhyd.com always say, nobody offers and yearns for love like men do.

He befriends her purporting to be a businessman, and soon realizes that she wants to become a police officer since she hates goons and gangsters. To help her, he introduces her to the corrupt Police Commissioner Krishnamurthy (Sampath Kumar), his mentor, who offers her a job if she spends a night with him.

Sometimes just one scene and one brilliant sequence of dialogues stand out in an entire movie, and add valuable points to its rating. Unfortunately this movie has no such scene - Sravani just leaves in disgust, and Thoota swears to bring down his own father figure Krishnamurthy. The film then degenerates into stock violence and police atrocity stuff, and fortunately ends before the next show begins.

Thoota is a lousy movie that you've seen a hundred times before if you've been sufficiently unfortunate - Ram Gopal Varma himself has made about half-a-dozen gangster movies that show how crime doesn't pay anyone except those who make movies on it. Thoota doesn't fall even into that latter category, with how miserably cliched and Satya-like it is. Plus, of course, there's the whole Tamil look-and-feel and lip-sync issues.

Nothing much seems to happen in the first half, which focuses on building Thoota's character and completely fails in creating any sympathy in you for him. A movie that shows a professional murderer feeling repentant but doing nothing to stop being one even though he has plenty of money and no compulsions or pressures to continue, is what we at fullhyd.com call a concept movie. There are several more such concepts - the demure Priyamani randomly appearing in an item song that is not a fantasy/dream sequence but a part of the movie, Mallika feeling sympathy for Jeevan for no reason at all etc.

The second half is mostly depressing, if you're even interested by then. Saranraj's role seems to be doing nothing for the film, and sequences seem more like they were being made up on the sets rather than part of a cohesive script-writing exercise. Jeevan is an average actor who cannot bring in intensity and substitutes that for a smirk, and Priyamani seems to be there mostly for skin show given how much she exposes in the songs.

The music is quite average, but the film looks professionally shot. Watching the movie just for that reason, however, is like going to Kukatpally just to buy a bus ticket till there. Skip this one as many times as you can, and skip it with your entire family.
Share. Save. Connect.
Tweet
THOOTA SNAPSHOT

ADVERTISEMENT
This page was tagged for
thuta telugu movie review
toota movie average
toota movie rating
Thoota telugu full movie download
thoota original rating
Follow @fullhyderabad
Follow fullhyd.com on
About Hyderabad
The Hyderabad Community
Improve fullhyd.com
More
Our Other Local Guides
Our other sites
© Copyright 1999-2009 LRR Technologies (Hyderabad), Pvt Ltd. All rights reserved. fullhyd, fullhyderabad, Welcome To The Neighbourhood are trademarks of LRR Technologies (Hyderabad) Pvt Ltd. The textual, graphic, audio and audiovisual material in this site is protected by copyright law. You may not copy, distribute, or use this material except as necessary for your personal, non-commercial use. Any trademarks are the properties of their respective owners. More on Hyderabad, India. Jobs in Hyderabad.