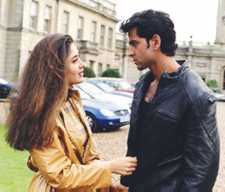 EDITOR RATING
5.0
Performances
Script
Music/Soundtrack
Visuals
NA
NA
NA
NA
Suggestions
Can watch again
NA
Good for kids
NA
Good for dates
NA
Wait to rent it
NA
The scion of a family that is among the "top 10 business groups of America" falls in love with a middle class girl in London, his parents cannot take it, and he battles against big odds to win her. What do you need to do if you want to present a theme as original as that and make a success out of it? A hell of a lot, and Ghai doesn't. What makes this debacle remarkable is that he has two of the hottest things of Bollywood in it.

The biggest problem with Yaadein is its tale. It starts off as something promising, evolves into something absolutely clichéd, and has very little real substance in the narration of any part. A father's relationship with three teenaged daughters has huge potential for excellent portrayal. It's done very ordinarily and insipidly, and doesn't have any profundity in approach. Ghai realizes that by interval time, and decides to shift to romance gear. But there's nothing new he has to offer here, either - in fact, many times you are reminded of Pardes - and the result is a film that won't leave too many memories. Incidentally, the truth is that the name has nothing to do with the theme - the few contrived scenes and dialogues are just, as the campus crowds would put it, "a nice try".

Raj Puri (Jackie Shroff), a restaurateur in London, loses his wife Shalini, and has to bring up his 3 teenaged daughters, Avantika, Sania and Isha (Kareena Kapoor), by himself. He shifts to India with them from London, and settles down in a farmhouse in a picturesque hill station. They are reminded of Shalini continuously, and that is all there is to the Yaadein bit.

Now Raj is the bosom pal of Lalit Malhotra, who, with his brother Jagdish (Amrish Puri), is the boss of the Rs. 5,000 crore Malhotra group. Lalit's son Ronit (Hrithik Roshan), a dotcom entrepreneur, has been practically brought up by Raj and Shalini, and adores "Raj Uncle" and the family. Ronit can't bear Raj leaving London, and follows him to India, where he helps with the marriage of Avantika and Sania, the two elder daughters. Then the third, Isha, goes to Malaysia for a cycle race that she wins. Ronit has followed her there, and saves her in a pretty incredible way from a marooned island. And this starts off love.

The second half has Raj Uncle deciding on Ronit's behalf whom Ronit should marry and betrothing him too (poor Uncle appears pretty mature till then), and then getting to know of the smitten hearts. But he's given his word already, and asks Ronit and Isha both to sacrifice their loves. And then some Maine Pyaar Kiya scenes ensue with Jagdish accusing Raj of coveting the Malhotra empire, Ronit refusing to forget Isha, and fighting for her despite odds. A melodramatic climax has you feeling happy the 200-minute saga is over.

The first half positively bores. It appears like a father story - a badly done one at that - with the lead pair doing guest roles and nothing moving at all. The second at least has a story, however ordinary, and the rating is what it is because of that. Hrithik manages to put in a dignified performance, and Kareena's fine too, though they don't set the screen on fire. Jackie is pretty good, and could have been in a classy role with a better script.

The music is pretty good, and the numbers like "Jab Dil Khile" and "Chanda Taare" have the audiences erupting. The cinematography and choreography are expectedly good - it's a Ghai film, and like we know by now, Hrithik is a good dancer. Hrithik will ensure good collections, in addition to all that some dotcom, carbonated drink, bicycle and mouth freshener companies have paid (a reported Rs. 3-4 crore cumulatively) so you can watch them being promoted by actually paying for it. With the music too having been sold for several crores, the film has already made profits, so Ghai isn't exactly living on a prayer. But this will be a lot of bitter medicine for him and the crew to swallow. It's a pity Ghai needs it at this stage of his career.

Go if you'd give anything to watch some Hrithik, but any other reason would be paying too heavy a price.
Share. Save. Connect.
Tweet
YAADEIN SNAPSHOT

Any sensible man can make out the movie to be illogical

ADVERTISEMENT
This page was tagged for
yaadein review
Film yaadein
film yaadein
Yaadein
Yaadein hindi movie
Follow @fullhyderabad
Follow fullhyd.com on
About Hyderabad
The Hyderabad Community
Improve fullhyd.com
More
Our Other Local Guides
Our other sites
© Copyright 1999-2009 LRR Technologies (Hyderabad), Pvt Ltd. All rights reserved. fullhyd, fullhyderabad, Welcome To The Neighbourhood are trademarks of LRR Technologies (Hyderabad) Pvt Ltd. The textual, graphic, audio and audiovisual material in this site is protected by copyright law. You may not copy, distribute, or use this material except as necessary for your personal, non-commercial use. Any trademarks are the properties of their respective owners. More on Hyderabad, India. Jobs in Hyderabad.