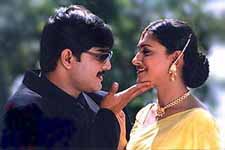 EDITOR RATING
3.0
Performances
Script
Music/Soundtrack
Visuals
NA
NA
NA
NA
Suggestions
Can watch again
NA
Good for kids
NA
Good for dates
NA
Wait for OTT
NA
Deevinchandi starts off as a tale of two diametrically different guys Siva (Srikant) and Satish (Anand), who are the best of friends. They are such good friends that Siva is willing to do anything for Satish. And when he comes to know that his friend's dream girl Lakshmi (Raasi) is being married to some other person, he drags her from the marriage pandal to Satish's place despite her hating Satish. Only to discover there that he is a wolf in sheep's clothing.

And this is where, if you are the average pro-active movie watcher, you start to think. This guy is supposed to be the hero of the movie. And he is supposed to be, by extension, having some basic thinking capability, and an understanding of right and wrong. Playing savior is one thing, and playing kidnapper quite another. Who was he saving here? Bhishma still went to a swayamwara.

And from here on, that badshah of family dramas, Mutyala Subbaiah, weaves such a confusing and contrived drama harping on middle class values that you begin to wonder how the minds of even successful film-makers lose all understanding of the basic principle of any-wood - that people come to films to get entertained for a couple of hours.

Siva's blunder ruins Lakshmi's marriage, of course, and so he steps forward to marry her. Well, the ethics wake up at least sometime. But the girl's father, a retired postmaster, feels that Lakshmi's act has disgraced his family's name, and throws her out of the house.

Despite his mindless behavior, Lakshmi starts adoring Siva as godsend in her life. Many totally unnecessary twists later, Lakshmi dies after giving birth to a son. In the interim, Satish tries to molest Lakshmi, and ends up being killed by Siva. So with Siva having to spend five years in prison, and with Lakshmi's father also dead, her sister Sweta (Malavika) brings up Siva's son.

Making Siva responsible for her family's ruin she develops an ill will for him and refuses to hand over the son when the latter is released from jail. If you haven't had enough of the initial twists and turns already, there good news for you - there are many more. So many that by the time the film comes to an end, it becomes nauseating.

It is unbelievable that filmmakers are dabbling in themes as obscurantist as this even in the Internet age. And they are not even any of those novice producers that hang around the studios to make films with any actor that comes their way: this one comes from the prestigious Ramoji Film City, which has made a wonderful film called Nuvve Kaavaali, and from an ace director who has made two of the biggest blockbusters in Telugu films - Pavitra Bandham and Pellichesukundam. How did they think that they could strike gold with a plot like this?

Even the comedy enacted by the trio of Brahmanandam, M S Narayana and A V S is disgusting to the core. As for Srikant, it's time that he stopped shedding those buckets of tears. Otherwise people will start forgetting that he is a hero. He's been doing it so often of late, tears now seem to come naturally to him.

It is Malavika who gets to have the best of the roles. She gets to slap around, abuse and look down upon Srikant as a worm. And poor Srikant bears the ignominy without as much a whimper! You might not be able to do the same - bear the ignominy of being subjected to something like this, that is - so keep away.
Share. Save. Connect.
Tweet
DEEVINCHANDI SNAPSHOT

ADVERTISEMENT
This page was tagged for
Deevinchandi movie Download
"movierulz" deevinchandi movie Srikanth Hero
movierulz deevinchandi movie Srikanth Hero download
????????? ?????? ????
telugu deevinchandi full movie
Follow @fullhyderabad
Follow fullhyd.com on
About Hyderabad
The Hyderabad Community
Improve fullhyd.com
More
Our Other Local Guides
Our other sites
© Copyright 1999-2009 LRR Technologies (Hyderabad), Pvt Ltd. All rights reserved. fullhyd, fullhyderabad, Welcome To The Neighbourhood are trademarks of LRR Technologies (Hyderabad) Pvt Ltd. The textual, graphic, audio and audiovisual material in this site is protected by copyright law. You may not copy, distribute, or use this material except as necessary for your personal, non-commercial use. Any trademarks are the properties of their respective owners. More on Hyderabad, India. Jobs in Hyderabad.