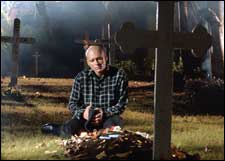 EDITOR RATING
5.0
Performances
Script
Music/Soundtrack
Visuals
NA
NA
NA
NA
Suggestions
Can watch again
NA
Good for kids
NA
Good for dates
NA
Wait for OTT
NA
Every once in a while comes a movie about a rather intellectually retarded person who has major special powers but doesn’t know how to use them and goes around hurting innocent people. Just over a year back Michael Moore made one called Fahrenheit 9/11, and this year it’s one in our own Bollywood.

Jokes aside, Alag is indeed a different attempt. However, several superhero films succeed because of a strong script, with thought in the finer details and in the characterization. Both Spiderman 1 and 2, the biggest recent hits in the genre, narrated good stories in 90 minutes, that showed the evolution of a person coming to terms with his superpowers and that depicted his inner conflicts in a way that was credible, or at least seemed to be (the only people who can really empathize being actual superheroes). There was engaging pace, there were some compelling dialogues, and there were some wow scenes.

Alag doesn’t make full use of the meat that its material has to offer. A good superhero film progresses through situations that involve genesis and discovery of the powers, multiple scenes saving and wowing the hoi polloi – including the femme –, character-development through situations that demand judgement, growth from a self-doubting individual into a self-assured hero, a villian with great lines and greater chutzpah, and a constant build-up to a grand finale where the battle involves as much brains as superpowers. With a lot of wow scenes in between.

Alag’s concept outpaces the screenplay-writing capability, with the result being a sense of what might have been. Too little seems to happen in the film, there are logical flaws galore, there isn’t enough élan on screen, the characterization is wayward if not completely non-existent, and the performances of the lead pair need catharsis.

Plus, there aren’t enough stellar individual scenes that make up for a whole film – Spidey 1, for example, had the scene in the college caféteria and one in the backalleys where Peter Parker rescues Mary Jane from some hoodlums, and Batman Begins, another recent success, had the whole training sequence for Bruce Wayne in the beginning, and the metamorphosis into Batman. Alag has one scene where there is the first display of the superpowers of its hero in public, but it is more of a betrayal – why isn’t there more such thought in the rest of the film?

Tejas Rohatgi (Akshay Kapoor) is discovered by a benevolent police officer (Sharat Saxena) in the cellar of a run-down uptown house when his father dies. The officer realizes that the boy has never been outside his house in all his life since his father kept him hidden when he realized that Tejas could electrocute people upon touch, and hands him over to Poorva (Dia Mirza), who runs a school for juvenile delinquents.

The school sees Tejas, super-brilliant but socially diffident, show his endowments in all of …5 scenes in the entire movie. The movie doesn’t show the metamorphosis of Tejas into any superhero battling evil in the world or helping people in a league that justifies such a gift. It’s almost about a nincompoop who prefers staying that way, and kills 1 (one) villian in the end, a megalomaniacal scientist whose biggest problem is not getting enough screentime. Sheesh, even George Bush has done the world more harm.

The film suffers from lesser detail than this review. Akshay Kapoor is a debutant and simply cannot bring to life such an unorthodox character, and Dia Mirza seems as histrionically challenged as ever. Jayant Kripalani, a one-time TV actor and quizmaster, is perhaps the most decent performer in this one. There are just a couple of completely incongruent songs. The visuals and background score aren’t in the league of what you’d expect from a product associated with the Varma stables.

Perhaps worth a watch if you have nothing else left to see in town.
Share. Save. Connect.
Tweet
ALAG SNAPSHOT

ADVERTISEMENT
This page was tagged for
alag movies
Alag Hindi movie
alag 2006
alag hindi moviess
Alag hindi movie
Follow @fullhyderabad
Follow fullhyd.com on
About Hyderabad
The Hyderabad Community
Improve fullhyd.com
More
Our Other Local Guides
Our other sites
© Copyright 1999-2009 LRR Technologies (Hyderabad), Pvt Ltd. All rights reserved. fullhyd, fullhyderabad, Welcome To The Neighbourhood are trademarks of LRR Technologies (Hyderabad) Pvt Ltd. The textual, graphic, audio and audiovisual material in this site is protected by copyright law. You may not copy, distribute, or use this material except as necessary for your personal, non-commercial use. Any trademarks are the properties of their respective owners. More on Hyderabad, India. Jobs in Hyderabad.