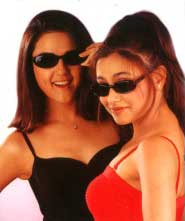 Feroz Hassan / fullhyd.com
EDITOR RATING
5.0
Performances
Script
Music/Soundtrack
Visuals
NA
NA
NA
NA
Suggestions
Can watch again
NA
Good for kids
NA
Good for dates
NA
Wait for OTT
NA
Blinding colors, deafening noise and crippling duration: that just about sums up Har Dil Jo Pyar Karega. The film is all gloss and zero substance, and then when you finally consider that the film actually lasts for 180 minutes, you are forced to speculate upon its content. Not that it doesn't have a plot, but what it has is nothing more than an apology.

Having seen the two leading ladies frolicking, prancing and doing all sorts of things together in the promos, we weren't exactly expecting a profound movie. But what we get is appalling for its banality. Right from the first voice over, Salman Khan seems to be in a hurry. He plays another orphan, Raj, who has been adopted by an Anglo-Indian lady, and brought up on a diet of music. So, our man lands up in Mumbai to fulfill his destiny, and find that dream girl of his.

A few implausible incidents follow, which actually lay the platform for even more ridiculous happenings. Raj rescues a young woman, Pooja (Rani Mukherji), from an accident, and through a case of mistaken identity ends up as her husband. Not to worry, 'cos our lady is in a coma, but one that enables her to take in everything that goes around her. Raj, now Romi, sticks around for the obvious mileage he gets for being the son-in-law of a prominent businessman.

While Pooja is 'sleeping', Romi falls in love with her as-good-as-a-sister friend, Jhanavi (Preity Zinta). A lot of pointless stuff follows, and the makers themselves seem to have taken their work anything but seriously. Consider such ineffectual dialogues as Preity saying 'Mujhe aaisa kyon lagta hain ki aap mujhse kuch kehna chahte hain', when all that Salman does is act like a buffoon.

One fine day, Pooja recovers, only to fall in love with Raj. The movie drags on endlessly, as we come up against the same drama that has been enacted in almost every Indian film. So, who gets the guy? No surprise this. What is the surprise though, is Shah Rukh Khan's appearance. A special appearance that has everyone guessing for all the wrong reasons.

One remarkable facet of the movie is Salman Khan's wardrobe. It would give Govinda a complex. Imagine a multi-colored florescent T-Shirt and you will get the point. Even more bewildering is the fact that he appears in tops. Now that 'tops' it all. Salman's histrionics are just as flashy. However, Preity and Rani salvage some relief for the audience, with their effervescent antics: something that Salman could do well to emulate.

Although the credits do indicate the presence of an editor, the duration suggests otherwise. A competent editor would certainly not have allowed the Shah Rukh scenes to creep in. And to compound the misery, the songs too sound stale.

The direction appears to have been left to the choreographer, going by the amount of jumping that goes on. What's more, the plot has been ripped-off from a Telugu film, which in turn took to the Sandra Bullock starrer, While You Were Sleeping.

A movie to be watched only by the hardcore Salman fans, but then Salman would be better off as an actor by ceasing to stick to his current image. Something his filmmakers need to learn as well.
Share. Save. Connect.
Tweet
HAR DIL JO PYAR... SNAPSHOT
HAR DIL JO PYAR KAREGA SNAPSHOT

ADVERTISEMENT
This page was tagged for
har dil jo pyar karega movie hindi mein
Har Dil Jo Pyar Karega hindi movie
Har Dil Jo Pyar Karega reviews
release date
Salman Khan, Preity Zinta
Follow @fullhyderabad
Follow fullhyd.com on
About Hyderabad
The Hyderabad Community
Improve fullhyd.com
More
Our Other Local Guides
Our other sites
© Copyright 1999-2009 LRR Technologies (Hyderabad), Pvt Ltd. All rights reserved. fullhyd, fullhyderabad, Welcome To The Neighbourhood are trademarks of LRR Technologies (Hyderabad) Pvt Ltd. The textual, graphic, audio and audiovisual material in this site is protected by copyright law. You may not copy, distribute, or use this material except as necessary for your personal, non-commercial use. Any trademarks are the properties of their respective owners. More on Hyderabad, India. Jobs in Hyderabad.