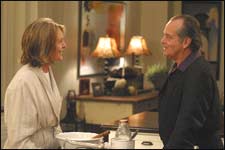 So goes the opening line of Harry Sanborn (Jack Nicholson). Harry is a rich 63-year old owner of a hip-hop label, over-the-top gregarious, a smoothie, seductive yet sly. His nomadic eye does the rounds of the entire continent for the young leggies. His current fascination is the cheery little Marin Barry (Amanda Peet). We say little here, although she is nearly 30, 'cos she looks like a teeny bopper when compared to her co-affairee.

Marin takes Harry for a romantic weekend to her mother's beach house in the Hamptons. To Harry's horror, he finds himself face to face with Marin's mother - Erica Barry (Diane Keaton), smack in the middle of her kitchen, raiding her refrigerator in his underwear. Not your best first impression.

Erica Barry is a 57-year old famous playwright, high-strung and crazy about all things French, who has come to the house with her sister Zoe (Frances McDormand) looking for some peace and quiet to script a new masterpiece. And peace and quiet evades her completely, as Harry is seized with chest pains and is rushed to the hospital.

Enter Dr. Julian Mercer (Keanu Reeves) - suave, dashing and smitten by Erica. He advises complete bedrest for Harry, who very reluctantly takes refuge in an even more reluctant Erica's beach house, as the rest return to the city.

What follows, is something that we've all been waiting for. Harry does a total twister and falls in love with Erica, whose feelings for him are just as strong. From there on, come a string of extremely witty lines, some very well-made intimate scenes and some really strong emotional bits that leave you Awwwwwww-ing!

But do not start getting comfortable here. A lot that is bound to happen doesn't. Not something you'd expect of a regular romantic-comedy. That is probably just it. Although the plot of this film has been used time and again, and the story is not completely original, Something's Gotta Give delivers all the way. Of course, a lot of this is attributed to the actors.

So, after his little adventure with Erica, Harry returns to the city and his old ways. But he doesn't leave us feeling antagonistic towards him. As a matter of fact it is just the opposite. Although, you sympathise with Erica, you can't help but be moved by Harry's loneliness and his approach. It is all completely credible. What is not believable, though, is Dr. Mercer's behavior. He courts Erica for ages, flies down to another continent with her, proposes marriage and, in the midst of all the celebration, meekly submits her to his rival.

Something's Gotta Give also evokes a fair share of laughs. Jokes like the ones on the protagonists' ages are dealt with extremely dextrously and are an absolute treat. The onus of the entire movie rests on its two main characters, who carry it, with the grace and ease expected from masters such as them.

Jack Nicholson has a perpetual smirk/grin which only adds to his subtle impishness and his character. Diane Keaton as Harry observes is one of a kind - gorgeous, cute, lovable and has us eating off the palm of her hand.

Nancy Meyers has done it again. After movies like What Women Want and The Parent Trap she has made another movie that will not be forgotten easily. A definite must-see if you qualify as anything of a softie.
Share. Save. Connect.
Tweet
SOMETHING'S GOTTA GIVE SNAPSHOT

ADVERTISEMENT
This page was tagged for
Something's Gotta Give english movie
Something's Gotta Give reviews
release date
Jack Nicholson, Diane Keaton
theatres list
Follow @fullhyderabad
Follow fullhyd.com on
About Hyderabad
The Hyderabad Community
Improve fullhyd.com
More
Our Other Local Guides
Our other sites
© Copyright 1999-2009 LRR Technologies (Hyderabad), Pvt Ltd. All rights reserved. fullhyd, fullhyderabad, Welcome To The Neighbourhood are trademarks of LRR Technologies (Hyderabad) Pvt Ltd. The textual, graphic, audio and audiovisual material in this site is protected by copyright law. You may not copy, distribute, or use this material except as necessary for your personal, non-commercial use. Any trademarks are the properties of their respective owners. More on Hyderabad, India. Jobs in Hyderabad.