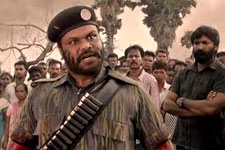 T J Reddy / fullhyd.com
EDITOR RATING
2.5
Performances
Script
Music/Soundtrack
Visuals
4.0
2.0
2.0
3.0
Suggestions
Can watch again
No
Good for kids
No
Good for dates
No
Wait to rent it
Yes
Before we begin, a disclaimer: I am deeply saddened by the conditions a few innocent people around the world live in, thanks to oppressive military/authoritarian rule or never ending civil wars. I wish they find peace in their homelands or any country that chooses to give them refuge. With the utmost respect and sympathy shown to them, let's discuss the haphazardly made, thinly thought-out exercise that can quite possibly give you a brain aneurysm, Okkadu Migiladu.

The true calibre of a pilot is judged by his ability to lift off and land his vessel. To paraphrase M S Narayana in Baadshah, a director of a film is the captain of his ship, the driver of his taxi, the owner of his wine shop and the pilot of his plane. The take-off point for any story he chooses to tell is with the first act where he introduces his characters and sets the plot in motion, and the third act landing is deemed a success when his characters grow and change through the course of his story while displaying substantial amounts of humanity which helps an audience connect to their trials and tribulations. When a film is bookended with such compelling story telling, in the hands of a good filmmaker, the second act feels more like a smooth flight on auto pilot to the viewing audience.

Okkadu Migiladu is a unique film in this regard. Between a shaky take-off and a disastrous crash landing, it ruins its silky smooth flight by creating a constant stream of turbulence no one ever asks for.

Your journey with the director begins with Surya (Manchu Manoj) - a Sri Lankan refugee/student who is being rigorously questioned (beaten up) by some cops in connection with a drug-related offence. This, however, is a smokescreen as Surya, a student union leader, has managed to rally his fellow students together to seek justice for three women who committed suicides after being subject to sexual abuse by a minister's son.

While being wrongly accused and transported from the police station to a prison, Surya narrates stories of Peter (a leader of the LTTE, played by Manoj again) and Victor (a refugee, played by Ajay Andrews) to that moral conscience of any police force, Posani Krishna Murali (who plays constable Shiva). Surya uses this story as a true-to-life metaphor for the constant oppression refugees face. And thus begins the film's second attempt at a successful take-off.

While the first 15 minutes of the movie are a hodgepodge of clichés, over-the-top acting (that is an understatement for the film itself) and crude filmmaking, the next hour and forty five minutes serve as a classic example of a debutant director biting off more than he has any right to chew.

Sans analysis, I have two words for this massive chunk of film - sensory overload. The dialogue (which is mostly speeches or crying) is loud, the score is garish, the action is beyond ludicrous, a coherent script is non-existent, and suffocating under all this is a tightly-knit story of a band of refugees rowing to a better future on a boat along the Indian Ocean.

After reading through the last four paragraphs, you might wonder what the movie is actually about. Honestly, I can't give you a straight answer. On the surface, it is the story of a young man attempting to rally the youth. But soon enough, in a misguided attempt at coaxing emotion, the movie parallels said man with a leader of oppressed masses. The leader (Peter) is neither inspiring nor watchable. The patience of many an audience member in my cinema hall wore thin while being waterboarded by Peter's incessant blaring about what makes a true hero and the land of milk and honey called freedom.

As I tuned my ears out at the tenth iteration of the speech, I was left wondering why he was leading from the front instead of planning tactics which could save thousands more. There is a reason for the saying "wars are orchestrated by men and fought by boys". But with enemies who rarely ever bother firing a bullet at him even when he stands right in front of them in the horribly CGI-ed hellscape of 2009 Sri Lanka, I understand his motive behind leading the line.

Just as you lose all hope in the movie showing any semblance of quality, it quiets down with a hyper-clichéd, poorly scored, excessively melodramatic yet oddly compelling story of survival and the triumph of the human spirit. While still not good in any stretch of the word, this hour-long segment is Oscar-worthy when compared to the film preceding and following it.

The responsibility for this scathing critique falls as much on the shoulders of the lead actor as it does on those of the director. Manoj Manchu is no Jr NTR or Mahesh Babu who despite being star kids can make bad films bearable with some charisma and screen presence, and is an eyesore here. A victim of poor direction and a character that can described in a single word, he is left to single-handedly bear the overwhelming weight of the film he finds himself in.

Suhasini is criminally underused and no other character is written to generate any emotion in you, but Ajay Andrews churns out one of the better performances of the movie (as Victor). This is, however, the silver lining of an extremely gloomy cloud.

Damn it, look what this movie does to a person. Like the film itself I began the review with the best of intentions. All it wanted to do was to spread its message through an overly idealised world, while all I wanted to do was inform the readers about the movie's pros and cons. But somewhere along the way, both of us lost sight of what we wanted to do. The film became what you've been busy reading till now, and I went to a dark place that shows no remorse for calling out cheap attempts at wringing money, time and emotion from a group of good people who are willing to spare all three. This is an untold true story that should have remained as is.
Share. Save. Connect.
Tweet
OKKADU MIGILADU SNAPSHOT 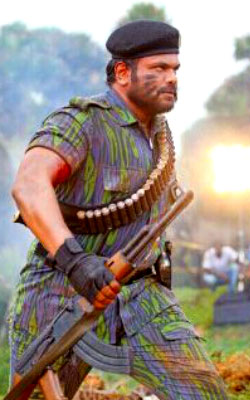 ADVERTISEMENT
This page was tagged for
Okkadu Migiladu telugu movie
Okkadu Migiladu reviews
release date
Manchu Manoj Kumar, Anisha Ambrose
theatres list
Follow @fullhyderabad
Follow fullhyd.com on
About Hyderabad
The Hyderabad Community
Improve fullhyd.com
More
Our Other Local Guides
Our other sites
© Copyright 1999-2009 LRR Technologies (Hyderabad), Pvt Ltd. All rights reserved. fullhyd, fullhyderabad, Welcome To The Neighbourhood are trademarks of LRR Technologies (Hyderabad) Pvt Ltd. The textual, graphic, audio and audiovisual material in this site is protected by copyright law. You may not copy, distribute, or use this material except as necessary for your personal, non-commercial use. Any trademarks are the properties of their respective owners. More on Hyderabad, India. Jobs in Hyderabad.