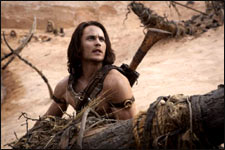 Shruthi / fullhyd.com
EDITOR RATING
5.0
Performances
Script
Music/Soundtrack
Visuals
6.0
5.0
6.0
7.0
Suggestions
Can watch again
No
Good for kids
Yes
Good for dates
No
Wait for OTT
Yes
The hype around John Carter is such that one goes in willing to be awed by a movie that promises to be in the same league as Star Wars, and given director Andrew Stanton's track record with Finding Nemo and Wall-E, it is but natural to take this feeling for granted. However, there is so much formula in the film that it sorely lacks that "new" that could have made it a great movie.

The story begins with John Carter (played by Taylor Kitsch, and well, at that), a civil war veteran who's lost his family and is now prospecting for gold somewhere in Arizona. During a chase sequence, he chances upon a cave in the middle of nowhere, and as luck would have it, gets transported to Mars after accidentally handling a pendant.

Here, he realizes he's special, that is, he can jump wide distances like no Martian can. And that - just that - becomes his USP throughout the movie, and is singularly responsible for his soaring demand amongst all the tribes of Mars.

He's first discovered by Tharks - tall, 4-armed, ugly aliens. Their leader stands by his theory that anyone that can jump that high will definitely make a great soldier, and therefore, gives John Carter special treatment, and even entrusts him to his daughter, Sola (Samantha Morton).

Meanwhile, also in Mars, there is a battle for one-upmanship, raging between the tribes of Helium and Zondanga. The Zodangas are led by Sab Than (Dominic West), who proposes marriage with the Princess of Helium to unite the warning tribes and end the battle that Helium seems to be losing badly.

And while we are at it, the princess of Helium, Dejah Thoris (Lynn Collins), happens to be a brilliant scientist (yawn), and is also better with the sword than John Carter, but somehow, is helpless when it comes to saying no to Sab Than's marriage proposal. So she does the Hindi film heroine thing and runs away, only to meet John Carter (yawn! yawn!).

Then there are the Therns, those magical omnipresent creatures who apparently exist on all planets to ensure that pre-written destiny is played out exactly as it was intended to be. To make that happen, they bestow Sab Than with super weapons that will surely end life on Mars (at this point, if there is a feeling of some flaw in logic that you can't seem to put your finger on, well, it's just begun).

John Carter, the reluctant hero, is mostly torn between not wanting to fight and then having to or doing so since he's in love with the princess. The adventure ride is mostly a blur of chases and choices, characters with agendas, and a lot more.

But what is sorely missed is that overarching human element that makes ordinary science-fiction movies great. And well, to top it off, there is something "not new" about the movie. Whether in its characterization, in the plot, or in the characters and their dilemmas - the movie doesn't surprise, or even allow for a wrong guess. The thrills, where they come, don't last.

What works for the movie is that it looks good, and the setting and the sequences tend to fit in neatly with our expectations of a grand scale science-fiction movie. The characters - some of them, at least - are well-etched, and seem utterly believable. The basic storyline is good, and at times clever, especially the end. It's just that they somehow do not all fall in place.

It's a watch to pass your time, provided you don't carry logic and your bag of expectations with you. And a definite disappointment if you are a Star Wars fan and see this as a fitting dose of more such.
Share. Save. Connect.
Tweet
JOHN CARTER SNAPSHOT

ADVERTISEMENT
This page was tagged for
jhon carter full movie in hindi
John Carter hindi movie
John Carter reviews
release date
Taylor Kitsch, Lynn Collins
Follow @fullhyderabad
Follow fullhyd.com on
About Hyderabad
The Hyderabad Community
Improve fullhyd.com
More
Our Other Local Guides
Our other sites
© Copyright 1999-2009 LRR Technologies (Hyderabad), Pvt Ltd. All rights reserved. fullhyd, fullhyderabad, Welcome To The Neighbourhood are trademarks of LRR Technologies (Hyderabad) Pvt Ltd. The textual, graphic, audio and audiovisual material in this site is protected by copyright law. You may not copy, distribute, or use this material except as necessary for your personal, non-commercial use. Any trademarks are the properties of their respective owners. More on Hyderabad, India. Jobs in Hyderabad.