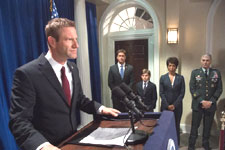 Nupur Barua / fullhyd.com
EDITOR RATING
5.0
Performances
Script
Music/Soundtrack
Visuals
6.0
4.0
6.0
5.0
Suggestions
Can watch again
No
Good for kids
No
Good for dates
No
Wait to rent it
No
The United States of America remains the most secure country in the world, from external attacks that is, despite Pearl Harbour and 9/11. Hollywood, however, loves to jolt the Americans out of their cocoons of complacence and smugness, and keeps churning out movie after movie that deals with attacks on the homeland, mostly by aliens (Independence Day, Mars Attacks etc). The flipside? Those with the intent to harm the Americans may get ideas (Die Hard is supposed to have inspired Osama Bin Laden to plan the destruction of the Twin Towers).

Hollywood has also had enough of aliens and Muslim jihadists, though (or Russians, for that matter). This time, there is a new villain - the Oriental terrorist. And in an attempt to make a patriotic movie, the makers of Olympus Has Fallen target yet another iconic American landmark - the White House.

Mike Banning (Gerard Butler) is the head of Secret Services. He has the toughest job in the world - protecting the American President, Benjamin Asher (Aaron Eckhart). He is a personal friend of the President, too, and all is well till a car carrying the latter meets with an accident in which the First Lady (Ashley Judd) dies.

Asher demotes Banning to working in the Treasury Department, partly because he cannot bear the sight of the man anymore - it reminds him of the night of the accident.

The terrorist, Kang Yeonsak, wants Asher to withdraw US troops from Korean soil and also wants to detonate all existing nuclear weapons on American soil. This is why he needs the President as a hostage.

Banning, who was looking out of his window when the attacks began, manages to get into the White House and rescue the President's son, and begins his mission to teach the Koreans a lesson.

The story, to begin with, has more than its fair share of flaws. An unidentified airplane manages to breach the sacred airspace over Washington D.C. and nobody realises until it is too late. This, after repeated references to the fact that the White House is the most secure compound in the world.

Then, the Korean airplane is unfazed by the fighter jets that finally make an appearance, and has no qualms about shooting them, and, for good measure, pedestrians below. Also, despite all the shooting, the President's young son is relatively calm and unhurt.

Again, Banning manages to enter the White House unharmed, while everybody around him dies (invisible armour?). And at the Pentagon, all those concerned with preventing more damage sit around and faff, as if they are at a tea party. In fact, they are offended when they are asked to butt out of the affairs of other countries.

There are glimpses of efforts to awaken nationalism throughout the movie - Banning's OTT dialogues, the American flag with numerous bullet holes, sudden uplifting music, sad newsreaders mourning the loss of freedom, inspiring extempore speeches to buck up the forces - the usual. The reference to the White House as Olympus (home of the gods in Greek mythology) is self-explanatory.

And finally, what could have been a thought-provoking movie turns into a one-man action thriller (the implausible feats of courage by Banning do not make things more believable).

The detailed production design, though, is commendable. What is even smarter is introducing smoke and darkness in the corridors of the White House, so that you cannot find faults even if you know the interiors of the place like the back of your hand. The costume design is slightly drab, and the CGI is shabby in portions.

Gerard Butler, with an American accent, does his best, but he is on his way to becoming the next Bruce Willis - all brawn and ridiculous one-liners. He fails to make an emotional connect with the audience. Aaron Eckhart makes for a good-looking President, and is convincingly sincere as a righteous man. The lack of chemistry between the two makes dialogues like "The President misses his friend" seem awkward.

Unless you are (a) a Korea-basher, (b) an American patriot, (c) a Gerard Butler / Aaron Eckhart fan, (d) an action movie buff, or (e) somebody who takes sadistic pleasure in seeing the White House blown up, Olympus Has Fallen is not your cup of tea. Wait instead for White House Down, releasing later this year. It may just have really terrifying antagonists - and at least the President is an African-American in that one (speaking of believable, relevant characters).
Share. Save. Connect.
Tweet
OLYMPUS HAS FALLEN SNAPSHOT 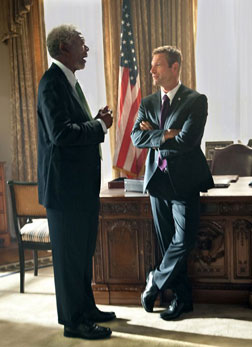 ADVERTISEMENT
This page was tagged for
Olympus Has Fallen english movie
Olympus Has Fallen reviews
release date
Gerard Butler, Aaron Eckhart
theatres list
Follow @fullhyderabad
Follow fullhyd.com on
About Hyderabad
The Hyderabad Community
Improve fullhyd.com
More
Our Other Local Guides
Our other sites
© Copyright 1999-2009 LRR Technologies (Hyderabad), Pvt Ltd. All rights reserved. fullhyd, fullhyderabad, Welcome To The Neighbourhood are trademarks of LRR Technologies (Hyderabad) Pvt Ltd. The textual, graphic, audio and audiovisual material in this site is protected by copyright law. You may not copy, distribute, or use this material except as necessary for your personal, non-commercial use. Any trademarks are the properties of their respective owners. More on Hyderabad, India. Jobs in Hyderabad.