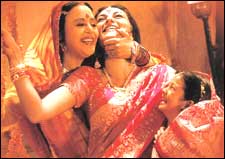 Priyanka Pulla / fullhyd.com
EDITOR RATING
5.0
Performances
Script
Music/Soundtrack
Visuals
NA
NA
NA
NA
Suggestions
Can watch again
NA
Good for kids
NA
Good for dates
NA
Wait for OTT
NA
Chingari has an old-world feel to it - like those Doordarshan teleserials that targeted rural audiences and sought to dispense some wholesome entertainment with a message. There is the heroic village postman who proselytizes in verse, the prostitutes who describe their sorry state with the articulation of a social-activist, the lover who hasn't the tiniest speck of impure lust lady-love. There are stereotypes galore, and though they stretch themselves sometimes to graze the truth, they invariably relapse into laughable triteness.

Through all those pitfalls, though, this is a unique story, crammed with fantastic performances - foremost among them being that of Sushmita Sen. As the gorgeous and capricious prostitute Basanti who is exploited into a corner by the village priest Bhuvan Pandey (Mithun Chakravorthy) and boomerangs back with a demonic rage, her performance is totally involved and brilliant.

Adapted from the story "The Postman And The Prostitute" by Bhupen Hazarika, Chingari is set in a backward and mostly illiterate North Indian village called Rangpur. Lal Batti is the abode of the prostitutes in this village - plump, gaudily made-up girls, stuffed into tiny, chamki laden cholies and ghaghras.

The movie boldly penetrates right into their lifestyle - it is their home and affairs, lodged in which the camera shoots the surrounding world. You are watching their playful fights, their raunchy body-language, their almost harshly direct come-ons, and you are thinking this life isn't that bad after all.

Bhuvan Pandey is the Kali-worshipping, tantra-practicing, self-appointed protector of the village, who is introduced carrying out a Shava Sadhana, sitting on a corpse with a naked woman perched on his thigh. It is a sign of the deeply distressing things that will be shown, and this is the point where previously unsuspecting parents get a jolt and drag their kids out of the movie.

Bhuvan's favorite prostitute is Basanti, and he makes love to her with the sadism and appetite of a devil. The gross-o-meter keeps registering new highs as the pain and hurt of a raped woman is graphically shown.

When Anuj Sawhney as Chandan, the sprightly new village postman, brings in some lightness and gaiety, it feels as ominous as a death-sentenced man's last wish being fulfilled. You just know someone good is gonna die. You just know this movie walks the dark side.

Well, Chandan falls in love with Basanti, and Bhuvan naturally opposes that vehemently. There are hackings and killings galore until Basanti is finally evoked into a manic rebellion.

Anuj is extremely good as the clean-cut young man with idealistic dreams and the passion to change the world. His poetry gets a little ridiculous at times, especially when it follows back-to-back with one of Sen's stellar scenes. Ila Arun as the madame of Lal Batti is in a role only she could pull off so well. And Mithun Chakravorty is equally comfortably ensconced in his part of a clinical, dispassionate villian.

At the end of the day, it is Sen's hundred avatars that really make the movie. She is multidimensional - from the flirtatious prostitute to a possessed woman, her facial contortions are fluid and believable. Her lips curled into asymmetry as she belabors Bhuvan in an outburst of repressed anger is one of the finest enactment by any actress ever.

But for the overly long sequences of histrionics, Chingari is just that - a small spark of anomalistic filmmaking in a field choked with clichés. It doesn't burst into a spectacular fire like you'd expect, but still manages to provide some relief.
Share. Save. Connect.
Tweet
CHINGARI SNAPSHOT

ADVERTISEMENT
This page was tagged for
chingari full movie in hindimovie
Chingari hindi movie
Chingari reviews
release date
Sushmita Sen, Anuj Sawhney
Follow @fullhyderabad
Follow fullhyd.com on
About Hyderabad
The Hyderabad Community
Improve fullhyd.com
More
Our Other Local Guides
Our other sites
© Copyright 1999-2009 LRR Technologies (Hyderabad), Pvt Ltd. All rights reserved. fullhyd, fullhyderabad, Welcome To The Neighbourhood are trademarks of LRR Technologies (Hyderabad) Pvt Ltd. The textual, graphic, audio and audiovisual material in this site is protected by copyright law. You may not copy, distribute, or use this material except as necessary for your personal, non-commercial use. Any trademarks are the properties of their respective owners. More on Hyderabad, India. Jobs in Hyderabad.