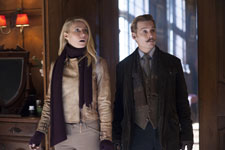 Nupur Barua / fullhyd.com
EDITOR RATING
4.0
Performances
Script
Music/Soundtrack
Visuals
6.0
4.0
5.0
7.0
Suggestions
Can watch again
No
Good for kids
No
Good for dates
No
Wait for OTT
Yes
The world of English author Kyril Bonfiglioli's books, that star the inimitable Charles Mortdecai and his faithful manservant Jock, is one that P G Wodehouse would have been proud of. In fact, Mortdecai and Jock are the new-age Wooster and Jeeves, in a way. The humour and the wit of these books may have been the reason for Johnny Depp to team up with his Secret Window director, David Koepp, again, to present their visual interpretation of Mortdecai, but unfortunately, it falls flat.

Mortdecai (Johnny Depp) is in debt. He is a man with a dubious past and present, and is considered an art connoisseur of sorts in England. As he tries to palm off fakes to various art dealers, almost losing his life in the process, events in Oxford lead him into a bigger adventure. The mysterious death of an art restorer forces Inspector Martland (Ewan McGregor) to reluctantly seek out the help of the rather eccentric Mortdecai.

Martland and Mortdecai were classmates, and the former has never forgiven the latter for stealing away the love of his life, Johanna (Gwyneth Paltrow). Martland resents the marriage of Mortdecai and Johanna, and still fancies himself in love with the girl who got away, much to Mortdecai's annoyance. It does not help matters much that Mortdecai and Johanna sleep in separate bedrooms these days, at her insistence. The bone of contention between the two is his newly-grown moustache, to which he has become rather attached, despite it causing his wife to gag whenever they kiss.

With his faithful manservant Jock (Paul Bettany) watching his back, Mortdecai decides to do his bit for Queen and country, and agrees to help out Martland in his search for a rare lost Goya painting. His adventures see him travel to Moscow and Los Angeles, but even when he thinks that the mystery is solved, despite his goof-ups, he realises that Johanna holds the key to unravelling the twist in the tale.

Adapted from the Mortdecai anthology, the movie is a poor cousin of the original. It is not that the humour is missing. In fact, there is plenty of it in the film, and the repetition of certain gags (literally) actually becomes a little too much to handle. It's mostly that there is nothing much that happens in terms of plot movement, and coupled with the nonsense, it can make the experience pretty confusing and tiresome. Who is the art restorer, who has the painting, why does Mortdecai get away with his swindles, what is Martland's agenda, what is Johanna's agenda, why are Americans, Russians and English typecast, and why does Mortdecai go to Los Angeles - these are some of the questions that remain unanswered.

Straight-faced Mortdecai is almost incoherent at times, but that may be because the makers decided to cast an American actor to speak with a stiff-upper-lip British accent. Most of the resolution is lost in translation, and the climax at an art auction is handled rather poorly. The movie lacks thrills - this is more of a comedy thriller. The action sequences are pretty staid, and the entire atmosphere is that of complacence. While it is understandable that Mortdecai is rather bizarre in the way he deals with stress, it is not exciting to be able to predict his reaction to every threat that comes his way.

The makers make an effort to incorporate a bit of the old-world British charm and humour in the movie, along the lines of, let's say, a James Bond flick meeting a Peter Sellers comedy. Or, to be more precise, a sophisticated Austin Powers movie. However, it does nothing to tickle your funny bone, and even the caricatures are yawn-inducing, as opposed to amusing. The screenplay is paper-thin, and the execution is equally ineffective, thus making Mortdecai a rather annoying film.

Johnny Depp seems stuck in a time warp with his expressions and dialogue delivery. His words are often swallowed, and his British accent does not do much to enhance his character. Ditto for Gwyneth Paltrow - her accent is so obviously fake that she comes across as an indifferent Johanna, instead of the way she was written: witty, intelligent and sensuous. Ewan McGregor and Paul Bettany try their best to salvage whatever they can, but since every frame has Johnny Depp in it, there is not much they can do. Jeff Goldblum is rather underused. Jonny Pasvolsky creates an impact, and shows the best comic timing of the lot.

The colours used in the sets and costumes are reminiscent of French and European films - a little Bohemian and a little Renaissance. The visual palette is pleasing to the eye, and some of the special effects are effective in taking the story forward (for example, the 3D map of the world that tells us where Mortdecai is). The cinematographer uses some interesting transitions, and those make the movie look better than it really is. The music is peppy, but the editing needed to be crisper, or at least have cut out some repetitive stuff.

Watch Mortdecai only if you are a die-hard Johnny Depp fan, and are not tired of his Jack Sparrow-ness. He is a normally pleasure to watch, but in this particular film, he becomes a mash-up between his roles in the Pirates series and in Love And Loathing In Las Vegas. We suggest you read the books for some real laughs.
Share. Save. Connect.
Tweet
MORTDECAI SNAPSHOT 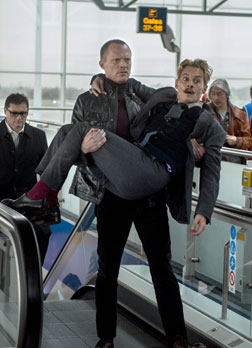 ADVERTISEMENT
This page was tagged for
Mortdecai english movie
Mortdecai reviews
release date
Johnny Depp, Gwyneth Paltrow
theatres list
Follow @fullhyderabad
Follow fullhyd.com on
About Hyderabad
The Hyderabad Community
Improve fullhyd.com
More
Our Other Local Guides
Our other sites
© Copyright 1999-2009 LRR Technologies (Hyderabad), Pvt Ltd. All rights reserved. fullhyd, fullhyderabad, Welcome To The Neighbourhood are trademarks of LRR Technologies (Hyderabad) Pvt Ltd. The textual, graphic, audio and audiovisual material in this site is protected by copyright law. You may not copy, distribute, or use this material except as necessary for your personal, non-commercial use. Any trademarks are the properties of their respective owners. More on Hyderabad, India. Jobs in Hyderabad.