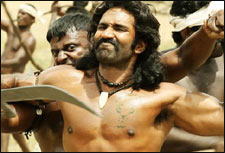 Deepa Garimella / fullhyd.com
EDITOR RATING
2.0
Performances
Script
Music/Soundtrack
Visuals
7.0
3.0
5.0
7.0
Suggestions
Can watch again
No
Good for kids
No
Good for dates
No
Wait to rent it
No
Simply put, Eka Veera is a bad movie experience. It is very, very hard to sit through, and more so for members of the Telugu audience. It can only be enjoyed by people who want to watch offbeat films, and who appreciate quirky cinema.

Eka Veera is a story of ancient Tamil tribes/villages, and that brings up tons of nativity issues that simply don't gel with you if you're from this part of the south. To their credit, the makers of the movie have no problems with the authenticity of their final product. The characters look sufficiently unkempt, crude and hairy, and the movie explores with exacting detail the locals' way of life customs, beliefs, traditions and relationships. It's even fascinating to watch this bunch go about life with the sparse tools and implements of the time - and to maintain this kind of flavour throughout the film must have been quite a feat.

Eka Veera is part thriller and part emotional drama. The film opens with a detailed and grandiose robbery, that is carried out by a certain clan that makes a living out of robberies. The leader of the pack welcomes into the fold a feisty young man called Veera (Aadhi), a strong man capable of quite anything.

However, Veera has a mysterious past behind him. This is a tale that involves warring villages, sentiments of yore, lost love, and human sacrifices. In the end, the director even throws a social message at us.

This painful tale of suffering and injustice is told with a monotonous and harsh in-your-face rawness, broken only by characters who keep break into distressing high-pitched wails and screams. The blood-stained scenes are bloody enough to put you off, and no attempt has been made at subtlety.

In addition, the Tamil ambience and feel are extremely overwhelming. This is a story that ought to have been left as a book, and not released for commercial appeal - the film festival crowd would probably appreciate it, and for good reason.

For whatever it is worth, the actors are good. This anti-glam project definitely spruces up everyone's resume by several notches, especially the women. The red teeth are both distracting and disturbing, but otherwise, the cast's make-up is fascinating. Aadhi gets to emote, flex muscles, and even dance. Pasupathi puts up a compelling performance. Most others are unfamiliar faces, save for Anjali (who floored everyone in Journey) and Shweta Menon.

Skip this one if you're looking for entertainment. And definitely do not go with a date.
Share. Save. Connect.
Tweet
EKA VEERA SNAPSHOT

ADVERTISEMENT
This page was tagged for
ekaveera Telugu movie download
eekavera move telugu donwloded
eka veera telugu full movie download
ekaveera telugu full movie new
aadhi ekaveera telugu movie telugu review 123
Follow @fullhyderabad
Follow fullhyd.com on
About Hyderabad
The Hyderabad Community
Improve fullhyd.com
More
Our Other Local Guides
Our other sites
© Copyright 1999-2009 LRR Technologies (Hyderabad), Pvt Ltd. All rights reserved. fullhyd, fullhyderabad, Welcome To The Neighbourhood are trademarks of LRR Technologies (Hyderabad) Pvt Ltd. The textual, graphic, audio and audiovisual material in this site is protected by copyright law. You may not copy, distribute, or use this material except as necessary for your personal, non-commercial use. Any trademarks are the properties of their respective owners. More on Hyderabad, India. Jobs in Hyderabad.