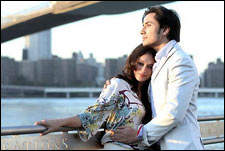 Nupur Barua / fullhyd.com
EDITOR RATING
6.0
Performances
Script
Music/Soundtrack
Visuals
6.0
6.0
5.0
7.0
Suggestions
Can watch again
Yes
Good for kids
No
Good for dates
Yes
Wait for OTT
No
A rom-com will always get its audience, even when one can predict the end after 2 minutes of the lead pair meeting. What sets apart one movie of the genre from another is its timelessness, and the ability to connect, regardless of age and gender, with the viewer. Debut director Anu Menon almost gets it, in London Paris New York, and the result is a watchable film with a few flaws.

Lalitha Krishnan (Aditi Rao Hydari) is on her way to New York to pursue her political studies. She misses her connecting flight from London, and has a whole day to herself, or so she thinks. Enter co-passenger Nikhil Chopra (Ali Zafar), the son of a film producer, who is in London to pursue film studies. They strike up a conversation, and, the fascinated Nikhil offers to spend the day with her, putting his prior commitment to his uncle and aunt on hold.

During the course of this one day, in the midst of the bantering and tomfoolery, both of them become aware of the increase in attraction towards each other. The more practical Lalitha does not want the beginning of a long-distance affair, but Nikhil promises to visit her in New York after 6 months.

Two years later, Nikhil is in Paris, and in search of Lalitha, whom he never visited, and who happens to now be in the city. After hearing him out, she forgives him, and they spend a romantic day in the city of love. However, they part badly and life goes on. Four years later, Nikhil is a film director, and he lands up in New York in search of the girl who has haunted him all these years. And he finds out that there is now a change in her life.

As far as stories go, London Paris New York is not unique. You will notice traces of popular romantic comedies, such as One Day, and even Serendipity - boy and girl are in love, but they complicate their relationship even further by trying to be practical (since it is a modern world), and are unhappy till the end.

What Anu Menon has cleverly done, however (she is also the writer), is the trimming of unnecessary details and peripheral relationships with other people. The story is only about these two. While parents and friends are mentioned in conversations, they are not a part of the story.

The writer, therefore, gets to the point before you can say "London". The 2 meet, and establish first the possibility of a romance, and then the impossibility of a courtship. In fact, it all happens so quickly that you may feel cheated out of a build-up to a romantic saga, but there is a song that makes matters clear.

Anu Menon had a story in place, true, but she seems to have messed up a bit with the storytelling. The script is slightly loose, and the inconsistency in pace may jar somewhat. The first half drags a bit, and the second half has more meat in terms of progression of story.

The characters, for example, are not very convincing. You have a half-Tamil half-Maharashtrian girl from the Mumbai suburb, Chembur, but she could be any ordinary girl from any part of the country. The stress on her background and culture seems a little forced. The Bandra boy, on the other hand, is a little more consistent - spoilt, pampered, irresponsible and then pseudo-intellectual, before he discovers himself - definitely more likeable than the girl.

The director and the cinematographer score with their fresh visuals of the 3 cities that we have seen in countless movies - the production design is not stereotypical and does not overshadow the narration. The music, by the lead actor himself, is decent, and the title song is definitely catchy. Just be prepared to be surprised with a song when you least expect it.

Ali Zafar seems to have stumbled straight out of Mere Brother Ki Dulhan and into London Paris New York. He drawls his way through the movie, speaking slowly, and in a sing-song voice, rather like an actor in a television serial. Despite that, he leaves a mark, and if he can restrain his sudden spurts of hamming, he may be the next big thing in Bollywood. Look out for his monologue towards the end, when he tells Lalitha how she has messed with his head.

Aditi Rao Hydari is already well-known for her histrionics, and she makes her character believable with apparent lack of effort. She breezes through her lines, and looks like she is having a great time.

Both actors, however, show signs of self-consciousness now and then. The chemistry between the 2 is not electrifying, and they seem a little awkward with each other, especially where they have to bond as friends, and even when they kiss (more than once).

Rose Films, run by siblings Shrishti Arya and Goldie Behl, may have taken a risk by producing a movie devoid of big names and grandeur, but the gamble may just pay off. And the credit goes mostly to the director and the producers, for daring to release a rom-com on a weekend that also witnesses the multiple releases of Oscar 2012 movies, and Paan Singh Tomar.
Share. Save. Connect.
Tweet
LONDON PARIS NEW YORK SNAPSHOT

ADVERTISEMENT
This page was tagged for
London Paris New York hindi movie
London Paris New York reviews
release date
Ali Zafar, Aditi Rao Hydari
theatres list
Follow @fullhyderabad
Follow fullhyd.com on
About Hyderabad
The Hyderabad Community
Improve fullhyd.com
More
Our Other Local Guides
Our other sites
© Copyright 1999-2009 LRR Technologies (Hyderabad), Pvt Ltd. All rights reserved. fullhyd, fullhyderabad, Welcome To The Neighbourhood are trademarks of LRR Technologies (Hyderabad) Pvt Ltd. The textual, graphic, audio and audiovisual material in this site is protected by copyright law. You may not copy, distribute, or use this material except as necessary for your personal, non-commercial use. Any trademarks are the properties of their respective owners. More on Hyderabad, India. Jobs in Hyderabad.