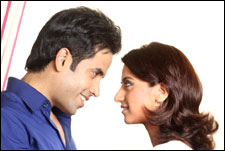 Nupur Barua / fullhyd.com
EDITOR RATING
3.0
Performances
Script
Music/Soundtrack
Visuals
5.0
3.0
4.0
5.0
Suggestions
Can watch again
No
Good for kids
No
Good for dates
No
Wait to rent it
No
Regression is not dead, yet, as Chaar Din Ki Chandni proves, with unfailing silliness and an unfunny plot. Samir Karnik just puts together a few stereotypes, and depends entirely on the hamming ability of his actors to add another movie to his not-so-hot resume.

So there is the first stereotype - the Rajput royal. The patriarch of the Khemgarh clan is Chandraveer (a.k.a. CV) Singh (Anupam Kher), an Anglophile who used to hang out with Prince Charles, and who picks up his rifle every time he loses his temper. He has a dangerously hot wife, Devika (Anita Raaj), who sports a blink-and-you-miss-it tattoo on her back.

There is a kinky, fetish-loving daughter, too - Divya (Shruti Sharma), who is about to be married within a week. Since the family is not large enough by clan standards, Devika's sniffer-dog brother Lt. Shaitan (Rahul Singh) lives in the big haveli with them.

Veer comes home for the wedding, accompanied by his girlfriend Chandni (Kulraj Randhawa). Since she was born one state above his, namely, Punjab, there is no way that the Rajput CV will welcome her with open arms as his bahu. So Veer presents her as a journalist who wants to cover a royal wedding.

The second stereotype is the abusive Punjabi. Chandni's parents (Om Puri and Farida Jalal) land up at the haveli, since they are under the impression that their daughter is getting engaged. A hassled Veer passes them off as decorators. A busload of Sikhs (stereotype#2a) following Fatoor emphasises the stupidity that Punjabis are supposedly capable of.

The third stereotype is the gay man named Tedha Medha (Sudhir Kumar) - he is a wedding co-ordinator, so of course his sexual orientation is important here. In fact, since he is a homosexual, he is a predator of sorts, latching on to any man he gets.

Samir Karnik, in an effort to emulate filmmakers of yore, such as Hrishikesh Mukherjee, forgot one important aspect of his film - a credible story. This rather bizarre plot goes nowhere as the movie progresses, and, beyond a few titters here and there, you will either squirm in your seat, or try to figure out why this movie was released.

Anupam Kher and Om Puri carry Chaar Din Ki Chandni on their shoulders, with their expert hamming. Actually, they are the only 2 actors who seem to have done justice to their role, stereotypes be damned.

Tusshar Kapoor cannot do much in this movie, and he could have anyway not carried it on his shoulders alone. Not only is he miscast, but also terribly unsuitable for a role that requires a double personality.

Kulraj Randhawa does not have much going for her, except her dimples. Her impression of a breezy, intelligent Punjabi girl, who loves to abuse, falls short of expectations.

There are 3 actors who have quite foolishly chosen this ridiculous move as a re-launch pad - Chandrachur Singh, Anita Raaj, and Harrish. Clearly, all three are ill-suited for comedy, and Chandrachur Singh is the best of the lot. God and Samir Karnik are the only 2 who know why Harrish is in the movie. Anita Raaj looks plain absurd.

The only stroke of innovative thinking is casting Johnny Lever as the villain. Of course, it would have been a brilliant role if the writer and the director were not so confused about how to portray him.

There is nothing much to be said about the production design and the costumes - all below average (despite the beautiful haveli). The music is a series of remixed hits - Yash Chopra, Sridevi and Rishi Kapoor should sue the makers for the terrible visualisation of the song, O Meri Chandni.

With movies such as Kahaani to choose from this weekend, one would have to be really daft to watch Chaar Din Ki Chandni. If you insist on checking it out, carry an aspirin to relieve you of the side effects of one of the worst movies of the year.
Share. Save. Connect.
Tweet
CHAAR DIN KI CHANDNI SNAPSHOT

ADVERTISEMENT
This page was tagged for
Chaar Din Ki Chandni hindi movie
Chaar Din Ki Chandni reviews
release date
Tusshar Kapoor, Kulraj Randhawa
theatres list
Follow @fullhyderabad
Follow fullhyd.com on
About Hyderabad
The Hyderabad Community
Improve fullhyd.com
More
Our Other Local Guides
Our other sites
© Copyright 1999-2009 LRR Technologies (Hyderabad), Pvt Ltd. All rights reserved. fullhyd, fullhyderabad, Welcome To The Neighbourhood are trademarks of LRR Technologies (Hyderabad) Pvt Ltd. The textual, graphic, audio and audiovisual material in this site is protected by copyright law. You may not copy, distribute, or use this material except as necessary for your personal, non-commercial use. Any trademarks are the properties of their respective owners. More on Hyderabad, India. Jobs in Hyderabad.