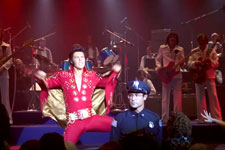 Punarvasu Pendse / fullhyd.com
EDITOR RATING
8.0
Performances
Script
Music/Soundtrack
Visuals
9.0
6.0
8.0
8.0
Suggestions
Can watch again
Yes
Good for kids
No
Good for dates
Yes
Wait for OTT
No
Baz Luhrmann's Elvis is loud, it is garish, and it is oh so over the top. It tells us all about Elvis, the myth, and next to nothing about Elvis, the man - and it does so on its own terms. Every single moment in the singer's life is made into an event no matter how insignificant it is, and the entire film feels like a celebration of the legend.

We expected nothing less from the director of movies like Moulin Rouge!, Australia and The Great Gatsby - but Elvis has the potential to outshine them all.

Elvis is a series of montages and flashbacks, seen through the eyes of the conniving agent Col. Tom Parker (Tom Hanks) of Presley (Austin Butler). It traces Presley's story, from his early influences growing up in a black neighbourhood and absorbing the vibrant musical culture in its church in Tupelo, Mississippi, followed by being influenced by black musicians on Beale Street in Memphis, to his meteoric rise in the American south, his Hollywood star era, his military service abroad where he courted and married Priscilla Beaulieu (Olivia DeJonge), his Las Vegas years at the International Hotel, and finally his unglamourous death at his Graceland estate.

The mousy Parker cuts a contrasting figure to the icon that is Elvis - as he narrates the star's rise and fall while trying to portray himself as Elvis's accomplice and partner - the "snowman" (the person who makes it snow, i. e. makes people part with their money while leaving them with only the smiles on their face) to Presley's showman. As the audience, however, we know better - Parker took and took from the man who still is the best-selling solo artist of all time, all the while pushing the king of rock and roll to the brink.

Baz Luhrmann, the poster child for big and flashy and extravagant, is the perfect kind of director to handle the mess that was Elvis Presley's life. The movie is itself messy, and on purpose, because one cannot depict Elvis' life accurately without capturing the chaotic energy of the man and his entourage. It throws everything at you and moves at a breakneck pace despite having a running time of over two and a half hours, and not once does it give you a moment to breathe. More importantly, at no point does Elvis, the movie, stop entertaining.

It also shows a happy portrayal of Presley's appreciation and interaction with black musicians, during a largely segregated American society, especially in the south where Presley was from. Opinions are divided on whether Presley used his voice to protest the injustice around him - but the movie portrays him as a man who was friends with blues legend B B King (Kelvin Harrison Jr.) and someone who used a Christmas music special as a platform to protest.

Ultimately, though, Elvis is a film for his fans. His success, the ebbs and flows of his popularity, and even his tragic death if Parker is to be believed - everything was ruled by the love he had for his fans. It is for those that saw him perform, and it is for those who never did but love his music. It is an ode to a man who never stopped performing despite having been caught in a gilded cage by the shenanigans of Parker, and gave everything he had even when he could barely stand.

Austin Butler is phenomenal at the titular Elvis, embodying the singer's signature flamboyance. Presley was the kind of person whose shows caused public disturbances and riots due to his aggressive moves and sexually-charged performances in the '50s, and Butler makes you believe that it was indeed possible for one person to be able to do that. Butler oozes charm and owns even the scenes where Elvis is subdued and lacking in his usual energy.

Tom Hanks, meanwhile, shows that he can play the sleazebag as effortlessly as he plays the hearthrob. You almost feel sympathy for the crooked snowman, before his chilling final lines regarding Elvis' death. That being said, this was meant to be the Elvis show, and it is the Elvis show - neither Hanks' sinister act nor Olivia DeJonge's quietly supportive wife act as Priscilla Presley is at the same level as Butler.

Lavish sets, creepy prosthetics, soaring Vegas wide shots - Elvis is also a visual spectacle. And the music, by Elliott Wheeler, matches the visuals. We have iconic original Elvis songs, we have Butler's recreations of the same, and we also get to listen to original tracks by famous modern day singers - Doja Cat, Eminem, Dr. Dre, Stevie Nicks (Fleetwood Mac), Jack White (The White Stripes) and electronic artist Diplo are some of the contributors to this biopic.

Elvis is an extravaganza, the kind that need to be seen on the big screen. Whether you're a fan of the king of rock and roll, or a fan of Tom Hanks or Baz Luhrmann - the movie strives to tower over it all. As for Butler, if you didn't know him from his large body of work as a child actor with Disney or Nickelodeon, you are surely going to notice now. 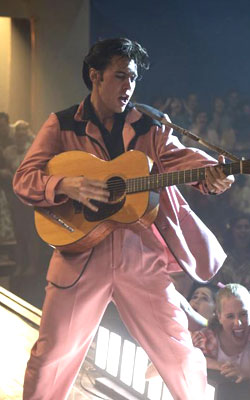 ADVERTISEMENT
This page was tagged for
Elvis english movie
Elvis reviews
release date
Austin Butler, Tom Hanks
theatres list
Follow @fullhyderabad
Follow fullhyd.com on
About Hyderabad
The Hyderabad Community
Improve fullhyd.com
More
Our Other Local Guides
Our other sites
© Copyright 1999-2009 LRR Technologies (Hyderabad), Pvt Ltd. All rights reserved. fullhyd, fullhyderabad, Welcome To The Neighbourhood are trademarks of LRR Technologies (Hyderabad) Pvt Ltd. The textual, graphic, audio and audiovisual material in this site is protected by copyright law. You may not copy, distribute, or use this material except as necessary for your personal, non-commercial use. Any trademarks are the properties of their respective owners. More on Hyderabad, India. Jobs in Hyderabad.