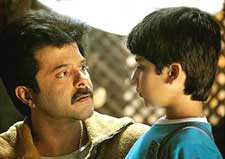 Rishtey, without a shred of doubt, is one of the... er... most conventional Bollywood movies one would have ever seen. It tries to stuff in absolutely everything for everybody, not counting the daily supply of oodles of emotional to-do for the Bollywooders. Consequently, Rishtey ends up shredding its focus and the expectations of elite audience to shreds and pieces, and that explains why it deserves such a low rating, in spite of its brilliant performances and decent music, undercurrent. 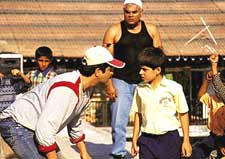 The film showcases Suraj, who is absolutely crazy about his son (Karan) and wife (Komal), and who love him just as much... Seven years after Suraj and Komal have been separated, Komal reappears to "legally" reclaim her son. Yaspal Chaudhary, father of Komal and an immoral lawyer, tactfully maneuvers the court room judgment by highlighting Suraj's poor financial position as an inability to raise Karan properly. Accordingly, the court insists that Suraj show a deposit Rs. 15 lakhs to prove his financial stability lest the ruling be in favor of Komal, much to the disappointment of Suraj and Karan. 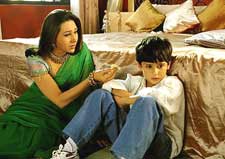 Suraj, already devastated at the loss of his wife, cannot stand to be separated from his son. Willing to make any sacrifice in order to reclaim his son, he re-enters the boxing ring, risking his own life. The film draws closer to climax as the things begin falling into place, and Komal learns that Yaspal was responsible for her misunderstanding Suraj. The movie ends with Yaspal begging for forgiveness and Suraj reuniting with Karan and Komal. 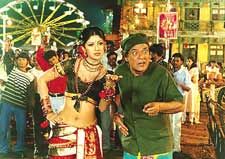 Suraj's devotion to his son as well as his wanting for nothing more than his son are beautifully enacted by Anil Kapoor, who delivers his lines with a splendid mixture of fear and anger. Karishma also receives good marks as a mother driven mad by all that's going on around her, and her scenes involving fits of anger and fright are hard-hitting and realistically acted.

On the opposite end of the spectrum, Amrish Puri portrays Yaspal Chaudhary's gradual breakdown with savage brutality, becoming more than just an ordinary movie villain. However, at the end of the day, Shilpa Shetty steals all the lime light with an excellent portrayal of an off beat character, an illiterate Maharashtran woman, who is in love with Suraj. 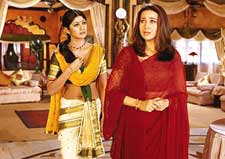 Emotions apart, there is a lesson to be learned from Rishtey. It shows how a judge, who knows nothing about the family and the life that the Suraj family had at home, makes a ruling that will change their lives forever. This should teach people that our court system doesn't always do the right things.

ADVERTISEMENT
This page was tagged for
shilpa shetty boobs in movie
rishte hindi movie
+rishte flim hiroen name
Rishtey hindi movie
Rishtey reviews
Follow @fullhyderabad
Follow fullhyd.com on
About Hyderabad
The Hyderabad Community
Improve fullhyd.com
More
Our Other Local Guides
Our other sites
© Copyright 1999-2009 LRR Technologies (Hyderabad), Pvt Ltd. All rights reserved. fullhyd, fullhyderabad, Welcome To The Neighbourhood are trademarks of LRR Technologies (Hyderabad) Pvt Ltd. The textual, graphic, audio and audiovisual material in this site is protected by copyright law. You may not copy, distribute, or use this material except as necessary for your personal, non-commercial use. Any trademarks are the properties of their respective owners. More on Hyderabad, India. Jobs in Hyderabad.