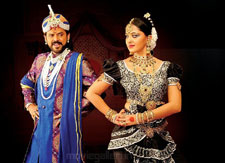 EDITOR RATING
3.5
Performances
Script
Music/Soundtrack
Visuals
6.0
2.0
5.0
4.0
Suggestions
Can watch again
No
Good for kids
No
Good for dates
No
Wait for OTT
No
The first mistake that the makers of Chandramukhi made was to leave absolutely no scope for a sequel. The second mistake was to give themselves the benefit of doubt and still make one. Nagavalli would rank among Venkatesh's worst movies. Featuring graphics that look like they were bought at a clearance sale, dialogues that feel like your kid's first sentences, and comedy that makes the telephone directory appear more funny, this one is to entertainment what death is to ...anything.

Essentially a remake of Chandramukhi, Nagavalli is basically spam. You remake a movie if it was a hit in another language, or if it was a hit a long time back, or if it was a good movie but flopped because Allari Naresh thought it was a comedy. Chandramukhi is barely 5 years old, and making almost the exact same movie again, after removing all the good things and adding Richa Gangopadhyay instead, feels like very little thought. Fortunately, they also seem to gave spent very little money on this.

So the painting of Chandramukhi lands in the home of a rich landlord Shankar Rao (Sarath Babu) when his daughter Gayatri (Kamalinee Mukherjee) wins it in a dancing competition. She and her husband promptly die in an accident, and, years later, spooky things are still happening in the palatial house, including a 30-foot-snake (drawing attention primarily for the lousy graphics) killing people. The family then calls a sorcerer Ramachandra Siddhanti (Avinash) who in turns calls Vijay (Venkatesh), a star psychiatrist and disciple of Eeshwar (Rajnikant in the original).

Together they set about trying to find out what is happening in the house. The family is dotted by 4 young girls - Shankar Rao's daughters Gauri (Richa Gangopadhyay) and Geeta (Shraddha Das), and his nieces (Poonam Kaur and Sujitha, who just take up space) - and Geeta is the red herring, working as the decoy with her sinister looks. Vijay's investigations lead him to interesting stuff, and in the end when you sit trying to put and two together, you figure out how completely horrible the writing is.

Among the various things that are not explained in the end are, what that attack by goons on Vijay is all about (a bleak explanation is hinted at, but it's way out of its depth), how Nagabhairava Rajasekhar lives for 130 odd years without food or water and is still such an awesome fighter at that age (and how he became one), and why Geeta acts the way she does. In general, any writer/director who doesn't have a perfect explanation for his red herrings in the end, is someone who's simply incompetent and hoping he won't get caught.

The few times the writing does try to explain things - the snake-charmer's death, Gayatri's state and her husband's death, for example - it appears contrived and improbable. It's almost like one writer has created the situations, and another is trying to wriggle out. And Venkatesh's introduction again betrays a lack of professionalism and seriousness in the scripting.

Mostly, however, it is the stark similarity the film has with Chandramukhi that disappoints, since the audiences go in assuming this is a sequel. One king is shown as killing Chandramukhi's lover in the first movie and she has her revenge against him there, and another is shown as killing her lover in the second movie - just what are these two different movies about when the person is the same and when this movie is clearly presented as a sequel to that, with Chandramukhi being the same in both?

The inept writing apart, the film becomes something of a joke with Richa Gangopadhyay's school-girlish acting towards the end. It's hard to see why a novice like that was chosen for that role, when Anushka and Kamalinee Mukherjee are in the cast. All heroines feel under-utilized, and it's not clear what they are all doing in the film anyway.

Venkatesh is arguably the best of the current lot of Tollywood heroes, and it's a wonder he chose to something like this. He should perhaps do more of what his fans love him for - breezy comedies. The music is forgettable, and the visuals have the production values of serials in Gemini TV. Tollywood directors attempting graphic-heavy themes should remember that each day at least one creature movie appears to be playing on some Hollywood movie channel or the other. Almost anything tried with Telugu film budgets would look inferior, and would draw attention to poor graphics rather than to the theme of the movie.

See Nagavalli full details
NAGAVALLI USER REVIEWS
1 - 4 OF 4 COMMENTS
POSITIVE  |  NEGATIVE |  NEWEST  |  OLDEST  |  MOST HELPFUL  |  LEAST HELPFUL
USER RATING
6.0
3 USERS
Performances
Script
Music/Soundtrack
Visuals
7.3
5.0
4.0
4.7
Can watch again - No
Good for kids - Unsure
Good for dates - Unsure
Wait for OTT - Unsure
nachkototato on 26th Dec 2010, 8:08am | Permalink
First half of the movie goes interesting, I feel it's perfect squeal of Chandramukhi, However heroins are not suited for their charecters...
sekhar on 20th Dec 2010, 9:09pm | Permalink
what a silly film. I am sure that daggupati interference in this film. After 25 years of acting, why an actor imitated other actor is an obvious question everyone gets. And yes, why RICHA?? Omg.... even a gal from our state college dramas does better. she may have good assets but only with ZERO talent. Don't confuse glamor with acting.


Pros: nothing
Cons: venkatesh, richa
RATING
3
Uday.cool on 18th Dec 2010, 9:28pm | Permalink
This movie is below average.....If you have free time and you are done with all other movies can you can go for this....
If you are die hard fane of Anushka you can enjoy 40 min in second half of the movie.
The worst part of the movie is script and story is meaningless....There are two funniest things in the movie:
1. Chandramuki's lover gunashekar is shorter than chandramuki, he doesnt even reaches to her shoulder...
2. Ending... I cannot keep that in words.. you have to see it.

ADVERTISEMENT
This page was tagged for
nagavali full movie
Nagavalli telugu movie
Nagavalli reviews
release date
Venkatesh, Anushka
Follow @fullhyderabad
Follow fullhyd.com on
About Hyderabad
The Hyderabad Community
Improve fullhyd.com
More
Our Other Local Guides
Our other sites
© Copyright 1999-2009 LRR Technologies (Hyderabad), Pvt Ltd. All rights reserved. fullhyd, fullhyderabad, Welcome To The Neighbourhood are trademarks of LRR Technologies (Hyderabad) Pvt Ltd. The textual, graphic, audio and audiovisual material in this site is protected by copyright law. You may not copy, distribute, or use this material except as necessary for your personal, non-commercial use. Any trademarks are the properties of their respective owners. More on Hyderabad, India. Jobs in Hyderabad.