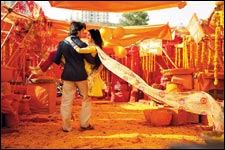 Kakoli Mukherjee / fullhyd.com
EDITOR RATING
5.0
Performances
Script
Music/Soundtrack
Visuals
6.0
6.0
5.0
7.0
Suggestions
Can watch again
No
Good for kids
No
Good for dates
Yes
Wait to rent it
Yes
After Lafangey Parindey failed to take off at the box office, the Chopras appear to have decided not to tread untested grounds, and to return to their well-tried (oh so well tried) concoction of lavish weddings in the backdrop of north-Indian cultural revelry. The result is a frothy, feel-good movie, though not with much substance.

Shruti Kakkar (Anushka Sharma) has her eyes set on becoming a wedding-planner. Armed with a 3-year part-time experience, she has the blueprint of her company "Shaadi Mubarak" ready, with one golden rule in it: "Jisse vyapaar karo, usse kabhi na pyaar karo." In comes Bittoo Sharma, who, after a failed attempt at hitting on Shruti, decides to pair up with her in business instead, to escape from his father's not-so-grand plans for him - becoming a farmer.

The duo hits it off in the wedding business with their smart networking skills, and with Bittoo's talent for manufacturing cheesy lines spontaneously winning over clients. What follows is a one-track, vibrant and boisterous tribute to the great Indian wedding, replete with songs, dance, choruses and the works.

In the midst of all the bonhomie, it's Shruti who goes astray and ends up sleeping with Bittoo, and eventually falls in love with him, too. Bittoo, not liking the emotional twist in business, starts acting weird, and before long, Shruti realises that it was just a one-night stand for him. She feigns normalcy for sometime, but soon her hurt feelings raise their hood, and she starts snapping at Bittoo for almost everything.

After some cat-dog fight sequences in which the two snarl and pounce at each other, they split their business, and Bittoo starts his own company, "Happy Wedding".They soon realise that their magic was in their team, and after ruining a few marriages, they decide to come together for the big wedding of the daughter of a business magnate.

Anushka Sharma impresses as the confident and spirited creative head, and Ranveer Singh arrives as a full-fledged actor in his debut film. With his craggy looks, he suits the role of the uncouth, happy-go-lucky hero to a T, whose poor mastery over English does not come in the way of his running a successful "bijness".

Whether they are mouthing quick repartees or hurling abuses at each other, the lead pair have their chemistry shine through, and provide the best moments in the film. The mature Shruti with a responsible business sense makes a perfect foil for the impulsive Bittoo.

Though supported by an able cast and good writing, Band Baaja Baraat is unlikely to set the cash registers ringing because it just presents old wine in a new bottle. In an age when film-makers are going the extra mile to dig up novel concepts to feed to an increasingly choosy audience, the movie invokes memories of numerous films from the Chopra camp itself. Also, the film lacks the starpower of a Shahrukh or a Rani which would have drawn fans to the theatre.

The music by Salim-Sulaiman is strictly average, and the songs stay with you only when they are being played on screen. Aseem Mishra's cinematography, however, is top-notch, bringing to life the colour-palette and flamboyance of Indian weddings in every frame.

If you are in the mood for a no-brainer entertainer with a pretty heroine and a street-smart hero, and have not received enough marriage invitations this season, you can kill a couple of hours watching this.
Share. Save. Connect.
Tweet
BAND BAAJA BARAT SNAPSHOT

See Band Baaja Barat full details
BAND BAAJA BARAT USER REVIEWS
1 - 8 OF 8 COMMENTS
POSITIVE  |  NEGATIVE |  NEWEST  |  OLDEST  |  MOST HELPFUL  |  LEAST HELPFUL
USER RATING
8.4
5 USERS
Performances
Script
Music/Soundtrack
Visuals
8.6
8.6
6.8
8.4
Can watch again - Unsure
Good for kids - Yes
Good for dates - Yes
Wait to rent it - No
san on 24th Jun 2012, 5:59pm | Permalink
superhit movie
saniya on 24th Jun 2012, 5:54pm | Permalink
Itz a movie which assures U dt if U r going to watch it U wl definately Enjoy ……….and the most important thing is that people shud not ignore this movie because Ranvir is a new comer ..as Ranvir being a new comer was luking so confident and he was having a great attitude and Obviously his acting made the Movie more entertaining ..!!I wish Ranvir comes again with a new confidence, attitude and ofcourse his acting ..!!wish U a Very Gud Luck Ranvir ..Your 1st Movie made Me Your Fan ..!!! BBB is 5/5
mammupapu on 23rd Feb 2011, 1:38pm | Permalink
It is really a wonderful movie.... I liked it a lot!
dimps.arya on 11th Jan 2011, 12:20am | Permalink
When something new comes nywhere in this world its known to very few but later on its impact is for rest of the life. This movie i can say is one of them. this movie deserves to receive an unaccountable accolades from the audience.Both of the actors are looking so confident & real that for a moment i had to remind myself that its a movie.After a longtime i have seen such an entertaining movie thanks to all of its cast & crew for making our money worth. 3 cheers to BAND BAJA BARAT....HOPE TO C U GUYS SOON WID SOME MORE DELIGHTFUL CHEMISTRY.
Teju on 31st Dec 2010, 9:07am | Permalink
The reviewer needs to go back and get brain functions checked.

This is a refreshing movie by all standards, giving it a 5 is a sure sign of a prissy, prudish connoisseur in desperate need of a reality check and a boot in the rear.

Watch the movie folks, you wont regret it.


Pros: It is easy to watch and the drama is not unnecessarily long drawn
Cons: can't really think of any
RATING
8
Ajay on 15th Dec 2010, 4:21pm | Permalink
print and internet media has come fwd big way to put across the point that this is a pathbreaking film and generally bollywood makes fool of public by giving multiple high profile cast and say No Problem. The TV media is cheaply screening Zhandu baam and Munni badnam. I wish they given some coverage to this beautiful movie and made public aware about good cinema. TV is after TRP bollywood is fooling public chor chor musere bhai. BBB is 5/5.

ADVERTISEMENT
This page was tagged for
band baaja baaraat full movie
Band Baja Barati Ranveer Singh Anushka Sharma Hindi mein film
Bollywood full movie band baaja barat
Band Baja Barat full movie
band baaja barat full movie
Follow @fullhyderabad
Follow fullhyd.com on
About Hyderabad
The Hyderabad Community
Improve fullhyd.com
More
Our Other Local Guides
Our other sites
© Copyright 1999-2009 LRR Technologies (Hyderabad), Pvt Ltd. All rights reserved. fullhyd, fullhyderabad, Welcome To The Neighbourhood are trademarks of LRR Technologies (Hyderabad) Pvt Ltd. The textual, graphic, audio and audiovisual material in this site is protected by copyright law. You may not copy, distribute, or use this material except as necessary for your personal, non-commercial use. Any trademarks are the properties of their respective owners. More on Hyderabad, India. Jobs in Hyderabad.