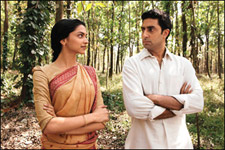 Ramya C / fullhyd.com
EDITOR RATING
4.0
Performances
Script
Music/Soundtrack
Visuals
6.0
3.0
5.0
7.0
Suggestions
Can watch again
No
Good for kids
No
Good for dates
No
Wait to rent it
Yes
We do not mind our heroes being shades of grey, we are okay with them two-timing women (or anyone, really), and we can even live with them being corrupt. But Ashutosh Gowariker now asks us to accept a hero who seems like every parent's worst nightmare.

The story of Khelein Hum Jee Jaan Sey is based in the 1930s, and has Surjya Sen (Abhishek Bachchan) as the leader of a small revolutionary group in Chittagong, which believes overthrowing the British rule in its little town could be the first step towards independence. The group carries out an attack on the areas where the British base their operations from, and is not entirely successful in the attempt. The rest of the film is about the follow-through of the attack, and how each of the attackers stays loyal to the cause of freedom, even at the cost of their life.

At the outset, Khelein Hum Jee Jaan Sey is a lot like the other krantikaari movies of our times, The Legend Of Bhagat Singh and even Bose, The Forgotten Hero. They all depict the lives of revolutionaries who did not follow the Congress's path to freedom, and did their own bit to increase the pain in the Raj's nose. But Khelein... seems more sinister than the older ones; and if nothing else, it is sad that the director who gave us Lagaan and Swades would do this.

Surjya Sen's character is definitely difficult to stomach - he 'recruits' kids (13-year-olds!) into his group and makes them wield guns and bombs; incites the kids to steal money from parents (never mind the mandatory "never steal" lecture; Surjyada doesn't say where the children could donate money from, especially when they aren't supposed to discuss krantikaari plans with their parents); plays, no, initiates nain-matakki with Kalpana (Deepika Padukone) and then enlightens her about independence being the only goal in his life, and how like Bollywood stars he does not have time for a relationship.

Surjya is also bullet-repellent till the very end, when the director brings on the gore, using the white-dhoti kurta as the perfect colour contrast. Gowariker squanders the one chance to redeem the character in a final court scene; probably in the attempt to make Surjya appear a man of action (rather than a man of words), there is little that is said in this vital scene - the hero does not betray the supposed fire in the belly, and appears almost non-chalant.

No, Surjya is not a hero. But he is someone who could be a real person in the current political scenario (think of how many independence struggles are happening in India alone now), and whom you hope your children will never meet. And whatever Mr. Bachchan (the senior) would like us to believe, we do not think it is (or ever was) about the editing - Abhishek Bachchan does not help Surjya at all. He keeps bringing on Guru-esque expressions, but cannot keep out being farcical.

Sikander Kher as Nirmal Sen is a lot more real, and definitely involves the audience a whole deal more than Abhishek does. The teenagers are the ones the audience really connects with - they are quick with their rejoinders, they get to mouth the wittiest lines, and the few laughs in the movie are in the scenes with them on. Deepika Padukone really does not have much to do, except of course adding "experience of working in a challenging period film" to her resume.

The music is the other key difference between The Legend Of Bhagat Singh and this one; while the former is undoubtedly one of Rahman's classiest best, Sohail Sen's compositions are likely on the fast-track to obscurity.

Final plea to Ashutosh Gowariker: we know you probably mean well, but please give us stories which inspire us and make us feel proud, and do not make us squirm in our seats because we keep thinking of how they can be twisted.
Share. Save. Connect.
Tweet
KHELEIN HUM JEE JAAN... SNAPSHOT
KHELEIN HUM JEE JAAN SEY SNAPSHOT

ADVERTISEMENT
This page was tagged for
Khelein Hum Jee Jaan Sey hindi movie
Khelein Hum Jee Jaan Sey reviews
release date
Abhishek Bachchan, Deepika Padukone
theatres list
Follow @fullhyderabad
Follow fullhyd.com on
About Hyderabad
The Hyderabad Community
Improve fullhyd.com
More
Our Other Local Guides
Our other sites
© Copyright 1999-2009 LRR Technologies (Hyderabad), Pvt Ltd. All rights reserved. fullhyd, fullhyderabad, Welcome To The Neighbourhood are trademarks of LRR Technologies (Hyderabad) Pvt Ltd. The textual, graphic, audio and audiovisual material in this site is protected by copyright law. You may not copy, distribute, or use this material except as necessary for your personal, non-commercial use. Any trademarks are the properties of their respective owners. More on Hyderabad, India. Jobs in Hyderabad.