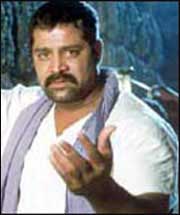 Ramakant D S / fullhyd.com
EDITOR RATING
5.0
Performances
Script
Music/Soundtrack
Visuals
NA
NA
NA
NA
Suggestions
Can watch again
NA
Good for kids
NA
Good for dates
NA
Wait for OTT
NA
Our journey into this aberrant begins with the local drunkard Krishna (Srihari… duh!) having a gala time in a small town. He lives his days stealing money from others and spending it on chicken and booze. He gets back home to his lame dad Guruvayya (Kota Srinivas Rao), and the father-son duo spends many a night sharing the booty. The chicken and booze, I mean.

One day both of them land up at a wedding reception and erupt into a song-and-dance medley. A most unfortunate wedding reception, you might think, but nay, my good friend! You've got the in-laws and a hundred guests clapping hands and swaying hips in glee.

In this entire melee, a necklace is stolen. Krishna knows Radha did it. Radha knows she did it. But the necklace is not at home. In fact, Krishna's side-kick and fellow drunkard Ali stole it from her.

But that's the last you'll see of him, 'cos by now the daughter and mother are off to Hyderabad to cure the unnamed disease, and the father-son are off to the Big City for an equally dumb (but not the same) reason.

Before I drown in insignificant details, more of the story. Pun intended. Back home - where else can miracles take place? Krishna's twin brother Ramu is a no-nonsense cop, and Sita's elder twin is a London-returned MBA graduate. By the way, their story goes diametrically opposite to the one you just read.

Ramu lives with his widowed mother and spends time living up to the reputation of his super-cop Dad. Sita feeds the wildlife in her garden and is taken care of by her loving millionaire father. You don't get to see too much of her father, but his smiling portrait on the wall randomly keeps appearing in the latter half.

To make sure our brawny hero keeps his muscles in action, enter the baddies. A whole lot of them. There's Sita's uncle Venky (Thalaivasan Vijay) who hams his way to fame, then there's a dude called Elephanta Rao who is exactly what the name suggests - a cross between an elephant and a human - and finally there's the father of Elephanta Rao, Mr. Muni Raja (Vijay Chandra) who is docile, calm and a horrendous mimic of Anthony Hopkins.

Many needless twists, turns and a diamond heist later, something happens on the screen that makes you get up and take notice. The intermission. After that, the makers confirm with regular Tollywood norms and push the item song. Not one, but two item songs by music director Rupali. One is a rip-off of Kylie Minogue's "Can't Get You Out Of My Head" with a bizarre video that should be excused as CGI. The other is a bizarre composition called "Mustafa, Mustafa".

The story trudges along to the part where the twins get to know of their real origins. Krishna confronts his hopeless foster-dad and realizes blood flows thicker than alcohol. Realizing that the reel was reaching an end (in all probability the budget, too), the director decides to snip of all the emotional and traumatic upheaval any other person in their place would face. In a fit of rage, both the brothers are out to finish all the baddies.

Raviraja Pinisetty's direction and screenplay show his class when he maintains a high level of detail till the very end. He doesn't forget to include an ambulance with the mandatory police jeeps to carry the body bags in the climax. As the music reaches a crescendo, the story comes to an abrupt close, and so does this review. So at the end you are left pondering… Why? Why? WHY???
Share. Save. Connect.
Tweet
KD NO. 1 SNAPSHOT

ADVERTISEMENT
This page was tagged for
Naina kd no 1 telugu movie 2019
kd no 1 telugu movie
telugu film kd
kdno1ntr
KD No. 1 telugu movie
Follow @fullhyderabad
Follow fullhyd.com on
About Hyderabad
The Hyderabad Community
Improve fullhyd.com
More
Our Other Local Guides
Our other sites
© Copyright 1999-2009 LRR Technologies (Hyderabad), Pvt Ltd. All rights reserved. fullhyd, fullhyderabad, Welcome To The Neighbourhood are trademarks of LRR Technologies (Hyderabad) Pvt Ltd. The textual, graphic, audio and audiovisual material in this site is protected by copyright law. You may not copy, distribute, or use this material except as necessary for your personal, non-commercial use. Any trademarks are the properties of their respective owners. More on Hyderabad, India. Jobs in Hyderabad.