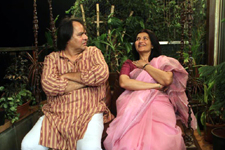 Kritika Deval / fullhyd.com
EDITOR RATING
6.5
Performances
Script
Music/Soundtrack
Visuals
8.0
6.0
7.5
7.0
Suggestions
Can watch again
Yes
Good for kids
No
Good for dates
Yes
Wait to rent it
No
The so-called autumn of life is probably the time while people stop expecting surprises, whether good ones or bad. For a whole cast past its prime, though, it meant Club 60, a surprise within a surprise about the pleasures and sorrows inherent in the fag end of one's existence.

Tariq (Farooque) and Saira (Sarika) have had perhaps one too many, and have lost their son, their only child, to a mass shooting incident in Denver. After this causes Tariq to attempt suicide, Saira decides that the couple move out of Pune and to Mumbai. There, they meet Manu Bhai (Raghubir Yadav), a loud Gujarati businessman who seems hell bent on annoying all who come his way.

Saira sees this, and thinks that this is the perfect way to draw Tariq out of his shell of grief and uncertainty. She lets Manu badger him into joining Club 60, a (d'uh) club for senior citizens that she hopes will force Tariq to be diverted enough to let go of his all-consuming sadness.

The film is by no means perfect, but it is so full of love and a deep understanding of human flaws and strengths, that you only notice the flaws when you notice Farooque Shaikh's frowning face one too many times. Through no fault of the actor's acumen, it really is rather difficult to sympathise with debilitating depression even in real life. You either live with the tedium of it, as Sarika's character does, or you try your best to bludgeon the person out of it, as did Manu Bhai and his coterie, by firmly ignoring its existence.

In the case of this film though, the fatal flaw is that we simply were not allowed into Tariq's head nearly enough for us to truly empathise. We know only how his son died, and that Tariq feels sad about it. We know nothing of his relationship with his son. We know nothing of his thoughts when Manu Bhai decides to throw a birthday party for the dead son to get Tariq out of his doldrums. The makers seem to have left all that work to Shaikh's infinitely expressive face, but which is simply not sufficient. All we see is a variation of petulance, bafflement and, rarely, anger.

Sarika is wonderful as the supportive and hopeful wife who must shove aside her own sense of loss in order to help her husband deal with his. For most of the film, she wears a carefully cultivated mask of cheerfulness, which, when it cracks, shows a veritable torrent of emotions.

Satish Shah, Tinu Anand, Sharat Saxena, and Vineet Kumar play characters that form the rest of Manu Bhai's gay-ng (say it out loud. not a comment on sexual orientation), each of whom has his own cross to bear, and each of which crosses is borne gracefully and with charm.

The only character that truly jars is Raghubir Yadav's Manu Bhai. Yes, we get it, he's the man, and just because you're aging doesn't mean you're dead and all that. None of these arguments reconcile you to watching a lecherous old man hitting on women young enough to be his daughters. I mean, we'd lock up a 23-year-old for hitting on someone who's 17. Why should this be seen as an affirmation of life?

The music is rather mediocre, and often off kilter. The camera work is as it should be.

The fact is, the credit goes mostly to the amazing actors that are part of this film, and to the director's sensitivity and apparent acumen considering the demographic he's dealing with. Your parents are still bound to enjoy the film more than you will, though, so do take them along.
Share. Save. Connect.
Tweet
CLUB 60 SNAPSHOT 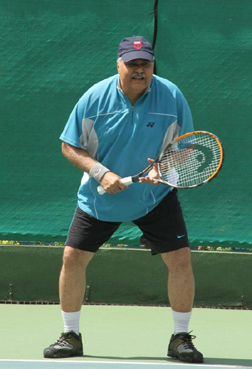 ADVERTISEMENT
This page was tagged for
hindi movie hd club 60
club 60 hindi movie
club 60 full movie
club60 review
Club 60 hindi movie
Follow @fullhyderabad
Follow fullhyd.com on
About Hyderabad
The Hyderabad Community
Improve fullhyd.com
More
Our Other Local Guides
Our other sites
© Copyright 1999-2009 LRR Technologies (Hyderabad), Pvt Ltd. All rights reserved. fullhyd, fullhyderabad, Welcome To The Neighbourhood are trademarks of LRR Technologies (Hyderabad) Pvt Ltd. The textual, graphic, audio and audiovisual material in this site is protected by copyright law. You may not copy, distribute, or use this material except as necessary for your personal, non-commercial use. Any trademarks are the properties of their respective owners. More on Hyderabad, India. Jobs in Hyderabad.