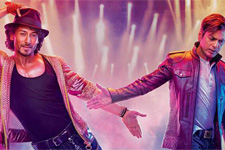 T J Reddy / fullhyd.com
EDITOR RATING
3.5
Performances
Script
Music/Soundtrack
Visuals
4.0
2.0
5.0
4.0
Suggestions
Can watch again
No
Good for kids
Yes
Good for dates
No
Wait for OTT
Yes
As a person who writes about cinema, you are occasionally asked by your overlords to watch movies you wouldn't be caught dead watching otherwise. I respect their requests and make my way to the theatre, and am intermittently surprised by the genuine quality said movies possess. Those are the days I tell myself to never judge a film by its title or poster.

Munna Michael is a dance-centric film starring Tiger Shroff as the titular Munna Michael. Due to a fatuous set of sequences the screenplay puts him through, he finds himself in Delhi employed as a dance instructor by a gangster Mahinder (Nawazuddin Siddiqui). The gangster (Mahinder) wants to learn the art form as a means to woo a bar dancer (Nidhi Agarwal) he is in "love" with, and who herself has aspirations of winning a dance reality show (the film pokes fun at reality shows but ends up focusing its final act on one). I'm in disbelief that I said those sentences and was still somewhat entertained by the first half of the film.

Films like these do not ask the audiences to reflect or introspect. I had no inclination to put much thought into it either, but I can only do that if a film keeps its entertainment quotient at a high and my boredom at a low. Since that is not the case, here's some nuggets.

The protagonist of a movie is the centre of a story, a character that typically makes the key decisions and experiences the consequences of those decisions. He/she affects the main characters' circumstances as he/she is often the primary actor propelling the story forward. This movie however presents no instance where Shroff's Munna checks at least 4 out of 5 those requirements.

Indeed, Shroff's character serves the story no purpose as his journey has no impetus. He is content with where he is and doing what he is doing. It is the character of Siddiqui (who somehow elevates every single movie he is in) that is the fulcrum of the film - he comes pre-packaged with the movie's inciting incident, conflicts, and stimuli for the story to exist. This is the character with a journey, and is the sole one of the main characters to experience any semblance of growth.

When this is your takeaway after over two hours of bright colours, loud noises, short shorts and "sick" moves, the film has a problem.

When the interesting characterizations and conflicts (that the film avoids like the plague) end as the intermission card rolls around, the film's ability to engage its audience also hits the dance floor with a sickening thud. Whilst acting opposite Nawazuddin Siddiqui helps the so-called hero and heroine elevate their game, their interactions with each other are as one-dimensional as the backgrounds and sets they inhabit. Shroff might have the moves, but those alone cannot sell a 2-hour movie. His green acting (while slowly improving) combined with the leading lady's cripplingly limited range exposes the flailing screenplay to an irredeemable degree.

As expected, the song and dance numbers join Siddiqui among the few blips of entertainment the film has on offer. I am duty bound to heap some additional praise on Siddiqui for this commitment to the role. Unlike most "stars" who choose to phone in their performances in movies below their pay grade, he genuinely picks up a whole bunch of steps, learns the requisite moves, and is hell bent on sending the audience home with a smile. To you, Sir, I tip my hat in gratitude because you are one of the finest actors of our time.

Director Sabbir Khan and his writer are none too worried about the story they are trying to tell. Their work rarely aspires at being art and hence ends up as a shallow product that lacks a soul. The paint by numbers story which works for beats rather than emotional payoffs, the lack of consequences to actions, the wholly abandoned sub-plots, little to no effort put into establishing a sense of space and time, the "homage" (a bad one) to the excellent Weapon Of Choice music video directed by Spike Jonze, and the overall feel of the movie that is blatantly reminiscent of Mithun Chakraborty flicks from the '80s and '90s are surefire red flags to any discerning member of the audience who came in looking for something more than Shroff's abs and moves or Nidhi's looks (which are both exploited to a near-sleazy degree).

When a film attempts to pay tribute to the King Of Pop, the filmmakers need to take a long hard look in the mirror and ask themselves if their final product at least within shouting distance of the calibre, showmanship and vision of the man. Rather than moonwalk into the audience's hearts, this film feels like it should be booed off the stage.

P. S. Please do the audience a favour and stop spamming them with cheap "feminist" dialogue because feminism is the "in" thing. Your film chose to tell a story where the lady fumbles at a dance routine she practised for weeks on end and is incapable of recovering without the man white-knighting her. It has no leg to stand on when it comes to social commentary.
Share. Save. Connect.
Tweet
MUNNA MICHAEL SNAPSHOT 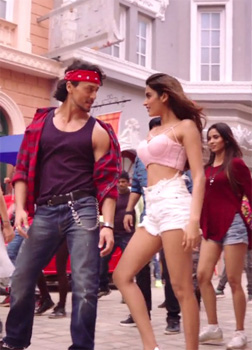 ADVERTISEMENT
This page was tagged for
Munna Michael hindi movie
Munna Michael reviews
release date
Nawazuddin Siddiqui, Tiger Shroff
theatres list
Follow @fullhyderabad
Follow fullhyd.com on
About Hyderabad
The Hyderabad Community
Improve fullhyd.com
More
Our Other Local Guides
Our other sites
© Copyright 1999-2009 LRR Technologies (Hyderabad), Pvt Ltd. All rights reserved. fullhyd, fullhyderabad, Welcome To The Neighbourhood are trademarks of LRR Technologies (Hyderabad) Pvt Ltd. The textual, graphic, audio and audiovisual material in this site is protected by copyright law. You may not copy, distribute, or use this material except as necessary for your personal, non-commercial use. Any trademarks are the properties of their respective owners. More on Hyderabad, India. Jobs in Hyderabad.