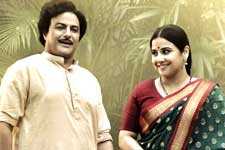 T J Reddy / fullhyd.com
EDITOR RATING
6.0
Performances
Script
Music/Soundtrack
Visuals
8.0
5.0
4.0
7.0
Suggestions
Can watch again
No
Good for kids
Yes
Good for dates
No
Wait for OTT
No
To state the obvious, NTR - Kathanayakudu works as a veritable highlight reel of Annagaru's unparalleled film career. We embark on a journey with humble sub-registrar Nandamuri Taraka Rama Rao as he makes his indelible mark on the film industry and leaves us wanting more as the first part of his epic saga concludes with the man's foray into a political career by establishing the Telugu Desam Party. As the film condenses decades his life and his 300-film stretch as a leading man into a two-and-a-half-hour tribute fuelled only by reverence, the story touches on three specific incidents that caught our attention.

The first one was in reference to the mindset of NTR (Nandamuri Balakrishna) during the national emergency and his reaction to M K Stalin's arrest and subsequent torture. The second scenario illustrated the great man's chops as an actor, a producer, a writer and a director as he brought his vision for Daana Veera Soora Karna to life. And finally, the third had us in awe as we realised that the man stood in one spot in two specific poses for nearly 20 hours to achieve the iconic shot of the ten-headed Ravana for Seetha Rama Kalyanam.

Why did these three pages of a mammoth encyclopaedia catch our attention, you ask? It is because our minds ran back to a triumvirate of Mani Ratnam films (Iruvar, Thalapathy and Raavanan) as these scenes were unfolding onscreen. Mani Ratnam took the mythology out of many a mythical character and adapted their stories to suit his narrative methods and to keep pesky fandoms at bay. NTR - Kathanayakudu, however, does a complete 180 and embraces the larger than life (almost God-like) persona of its title character to its fullest extent from line 10 in scene 2.

NTR's doting wife Basavatarakam (Vidya Balan) looks at a picture of her husband and talks about how the man in the picture resembles The Almighty. The myth is put firmly before the man. Does this choice pay off? That depends on what you look for from Nandamuri Balakrishna's labour of love.

If you seek to relive NTR's glory days in all their pomp and show while frenzied fans around you bellow slogans, throw flowers and shed tears of joy, you will sit through a cinematic experience that you thought our cynical, modern-day, society killed off over a decade ago. But if it is a deep dive into Annagaru's psyche that you seek, then this may not be the movie for you.

In the more innocent days of early 2018, Sanjay Leela Bhansali insisted that cinema was meant to be grand entertainment and not a tedious history lecture. The characters splashed across the silver screen were meant to be hyper-realised versions of ourselves that we were supposed to empathize with as and when we saw a tinge of our own stories and struggles in them.

The central character of writer/director Krish's film is introduced to us as an embodiment of the divine, and during the course of the movie's runtime, the storyteller in Krish struggles to climb uphill as he attempts to infuse humanity to a character who is seemingly infallible and whose every action seems justified.

I remember reading a story about Chiranjeevi's struggles to obtain his first role in films. A man who would go on to define Telugu cinema for decades, after NTR, was told that he had no chance of succeeding in the movies with the face that he was bestowed with. His proving his doubters wrong through a spectacular career made me admire his story, struggle and drive to a higher degree.

This film's version of NTR experiences no such struggle. Every doubter and detractor of his grows to accept their folly with little to no effort put in by the man in the eye of the storm. When the bigwigs of the film industry, the educated middle class, holy saints and seers and the poverty-stricken proletarian all shower the same man with similar words in terms of adulation, the mass of humanity inhabiting the world have a distinction without a difference. Their glowing words ring hollower each time, and real to life stories of devotion recreated for the screen lose their shine just a tad.

With no obstacle in sight for the Eduruleni Manishi (not the movie), Krish creates hurdles for his leading man powered solely by the latter's desire to one-up his own lofty standards. Short sequences (sandwiched between dialogues dripping with praise) capture NTR's dedication to the cinematic medium and the lengths the man would push himself to to bring about a seismic shift in how movies were made and how art was perceived by the masses.

A handful of these scenes brimming with tension and focus combined with snippets illustrating the quiet comradery between NTR and Akkineni Nageshwara Rao played to perfection by a charming and understated Sumanth, form the emotional core of a film that would have shot itself in the foot with its indulgent nature. As the movie develops this side of its narrative, NTR's unopposed rise is offered two impediments of mythic proportions. They come in the form of both the central government and its myopic view of the Telugu-speaking public, and mother nature wreaking havoc on said public. In an effort to overcome these hindrances we see the man address his views and beliefs via his preferred medium of cinema which soon morphs into a large-scale movement that galvanises Andhra Pradesh.

Krish's nuanced, bird's eye take on society is evident in how expertly these sequences are constructed and executed. The movie's autopiloted presentation turns off at the first tragedy that strikes NTR. An almost dialogue-free four-minute sequence of Balakrishna exercising his acting heft is endlessly engaging. Krish's sensibilities take over in increments post this plot point. His attention to detail in terms of makeup, camera-work, set design, inter-personal relationships between characters and his socio-political ideologies take centrestage as he finds some meat to sink his teeth into.

Balakrishna, too, grows into the film and the role of his legendary father as time progresses. Given his age, he is more suited to play an older iteration of NTR than a younger one. As the character's hair thins, vision deteriorates and gait stiffens, the leading man becomes progressively more compelling. The performance Balayya has been building up to in a long-standing career (in his own right) is undoubtedly in the next chapter of this story, and we can't wait to see it. Vidya Balan, though, is incapable of dishing out a bad performance at this stage of her career. While this film is clearly not a showcase of her talents, the shadow the character (and the actor portraying it) cast on the proceedings are long and unmistakable.

And therein lie the pros and cons of NTR - Kathanayakudu. It is a film whose parts, both good and bad, outweigh the whole to a disproportionate degree. "To err is human. To forgive is divine" is one of our favourite proverbs for a reason. We are in no way qualified to critique the mythical man whose story this film is based upon, but we sure can offer our two cents on the way the story was told. There is a clear dissonance between the story the producer/actor wanted to tell and the film the writer/director wanted to make. And in a rare turn of events each of them has good ideas they bring to the table, but the ideas themselves play spoilsport with each other as they diminish from the overall impact that they could have had had the film chosen a distinct path with a singular voice. As it stands, the first part of this duology is a flawed yet enjoyable and informative film about a seemingly flawless, charming and wise human being.
Share. Save. Connect.
Tweet
NTR KATHANAYAKUDU SNAPSHOT 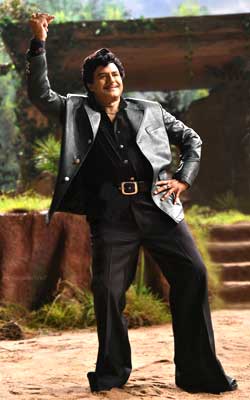 ADVERTISEMENT
This page was tagged for
NTR natinchina kathanayakudu Telugu movie full movie
ntr kathanayakudu full movie in telugusongs
kathanayakudu telugu movie review
ntr kathanayakudu movie rent
ntr movie in dilsukhnagar
Follow @fullhyderabad
Follow fullhyd.com on
About Hyderabad
The Hyderabad Community
Improve fullhyd.com
More
Our Other Local Guides
Our other sites
© Copyright 1999-2009 LRR Technologies (Hyderabad), Pvt Ltd. All rights reserved. fullhyd, fullhyderabad, Welcome To The Neighbourhood are trademarks of LRR Technologies (Hyderabad) Pvt Ltd. The textual, graphic, audio and audiovisual material in this site is protected by copyright law. You may not copy, distribute, or use this material except as necessary for your personal, non-commercial use. Any trademarks are the properties of their respective owners. More on Hyderabad, India. Jobs in Hyderabad.